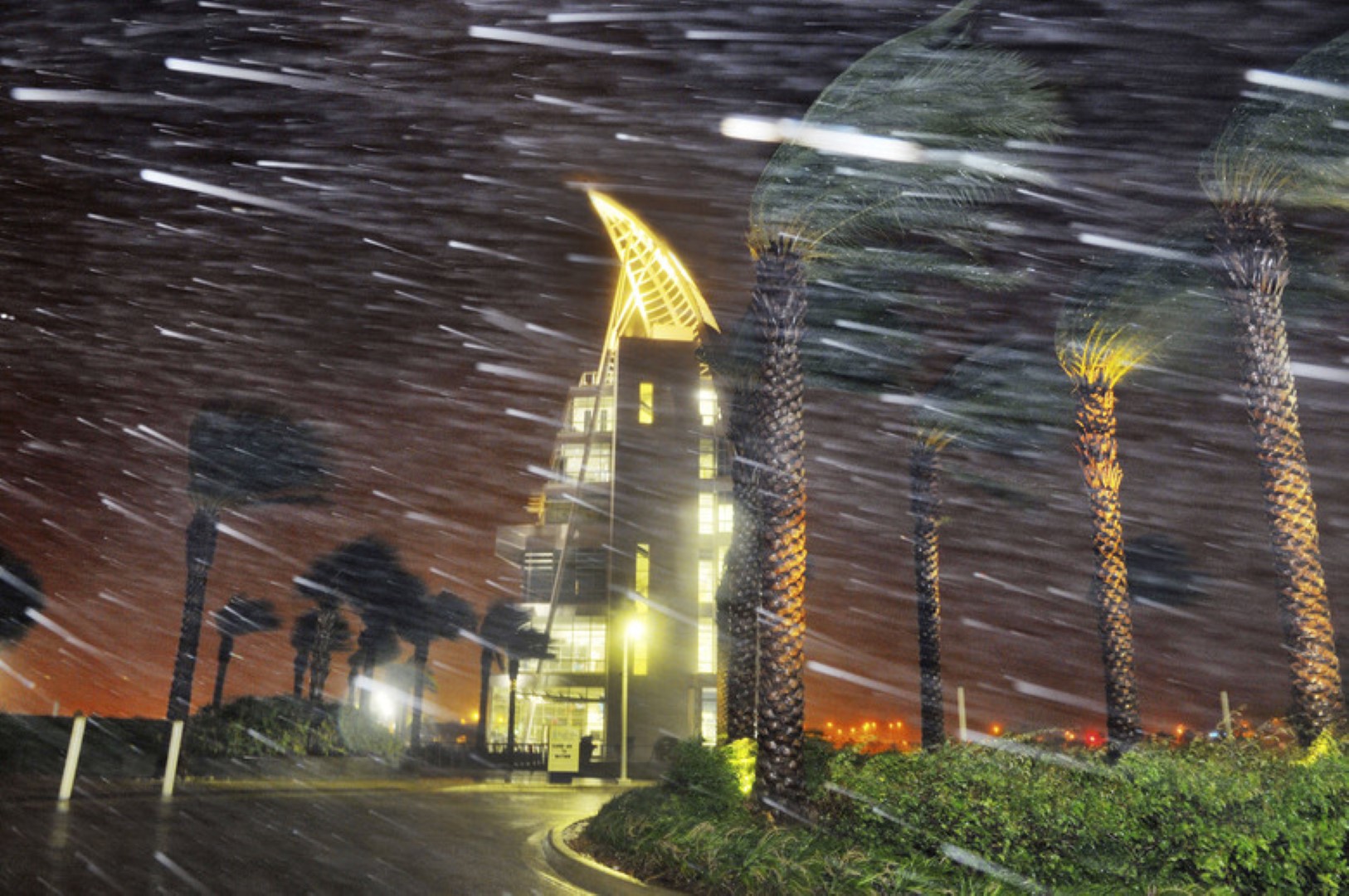 Hurricane Matthew scraped Florida’s Atlantic coast early Friday, toppling trees onto homes and knocking out power to a half-million people but sparing some of the most heavily populated stretches of shoreline the catastrophic blow many had feared.

Authorities warned that the danger was far from over, with hundreds of miles of coastline in Florida, Georgia and South Carolina still under threat of torrential rain and dangerous storm surge as the hurricane pushed north.

“Remember, it could be the worst of it is yet to come,” Gov. Rick Scott said in the morning.

Matthew was downgraded to a Category 3 hurricane overnight, and its storm center hung just offshore as it moved up the Florida coastline, sparing communities its full 120 mph winds. Still, it got close enough to knock down trees and power lines, and a 107 mph gust was recorded at Cape Canaveral.

As the storm closed in, an estimated 2 million people in Florida, Georgia and South Carolina were warned to move inland to escape the fury of the most powerful hurricane to menace the U.S. Atlantic coast in more than a decade.

Matthew left more than 280 people dead in its wake across the Caribbean.

As it moved on to Florida, it largely skirted the Miami-Fort Lauderdale-Palm Beach areas of over 7 million people and hugged closer to the coast farther north, menacing such communities as Vero Beach, Daytona Beach, Cape Canaveral and Jacksonville.

Some people who refused to evacuate were stranded and called for help early Friday but were told to stay put until conditions improved enough for paramedics and firefighters to get to them, said emergency operations spokesman David Waters in Brevard County, the home of Cape Canaveral.

“A family called in that the roof just flew off their home on Merritt Island,” Waters said.

It was a scene officials hoped to avoid in other cities as the storm pushed north.

In Jacksonville, where 500,000 people were told to evacuate, Mayor Lenny Curry warned that authorities would not be able to help them during the worst of the storm.

“You need to leave. If you do not leave you will be on your own,” Curry said.

Despite warnings, many people along the Florida coast decided to take their chances.

In Cape Canaveral, John Long rode out the storm in his 32-foot camper in a park a half-mile from the beach.

He lost power shortly before dawn but quickly fired up his generator. Small tree branches battered the vehicle but the large ones on the park’s giant oak trees didn’t fall.

“It was kind of loud and kind of shaky but nothing that caused too much concern,” he said.

Robert Tyler had feared a storm surge would flood his street, which is only two blocks from the Cape Canaveral beach. But he and his wife, Georgette, felt fortunate Friday morning when they looked out the front door of their one-story cinderblock apartment and there wasn’t much water.

Tree branches littered the road, and he could hear transformers exploding overnight, but his home didn’t appear to have damage on first inspection, and his vehicles were unharmed.

“Overnight, it was scary as heck. That description of a freight train is pretty accurate. At one point it felt like the windows were going to blow even though they all were covered with plywood,” he said.

Florida’s governor called it a “blessing” that so far Florida was avoiding a direct hit as the storm sliced northward.

Still, forecasters said it could dump up to 15 inches of rain in some spots and cause a storm surge of 9 feet or more. They said the major threat to the Southeast would not be the winds – which newer buildings can withstand – but the massive surge of seawater that could wash over coastal communities.

The Fort Lauderdale and Orlando airports shut down. Airlines canceled more than 3,000 flights Thursday and Friday, many of them in or out of Miami and Fort Lauderdale. Amtrak suspended train service between Miami and New York, and cruise lines rerouted ships to avoid the storm, which in some cases will mean more days at sea.

Thousands of people hunkered down in schools converted to shelters, and inland hotels in places such as Charlotte, North Carolina, reported brisk business.

The last Category 3 storm or higher to hit the U.S. was Wilma in October 2005. It sliced across Florida with 120 mph winds, killing five people and causing an estimated $21 billion in damage.