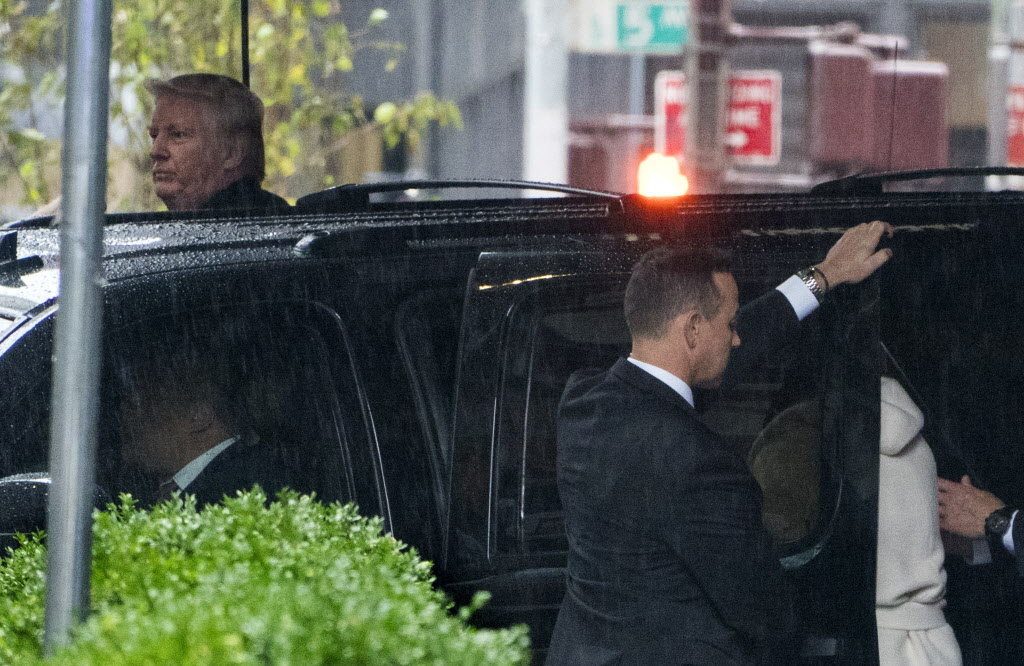 His presidential bid in chaos, a defiant Donald Trump slammed Republicans rushing to revoke their support for him as “self-righteous hypocrites” and signaled he may try to turn Sunday night’s crucial debate against Hillary Clinton into a referendum on her husband’s treatment of women.

Trump will take the debate stage under enormous pressure. Even before the new revelations of his predatory sexual remarks about women, Trump’s campaign was slumping. But the release of the 2005 video, where Trump is heard bragging about using his fame to “do anything” to women, left some Republicans convinced the damage was insurmountable.

Even Trump’s most loyal supporters struggled to defend him.

“They’re remarks you certainly don’t want to hear from anyone, much less a presidential candidate,” Rudy Giuliani, the former New York City mayor, said Sunday on CNN. “I think he made a full and complete apology for it. He probably is going to do it again tonight.”

Clinton has stayed largely silent since the video was made public Friday, though running mate Tim Kaine accused Trump of engaging in a “pattern of assaultive behavior.”

“I think there’s kind of a piece of the jigsaw puzzle missing in Donald Trump where he does not look at women and consider them as equal to himself,” Kaine said on CNN.

Trump’s troubles have almost completely overshadowed the release of hacked emails from the Clinton campaign that revealed the contents of previously secret paid speeches to Wall Street. Clinton told bankers behind closed doors that she favored “open trade.” Such remarks were at odds with her tough public comments.

Trump allies desperately hope the businessman can keep his focus in the debate on Clinton, raising questions about her trustworthiness and pushing his own populist economic ideas. The candidates will face questions in the town hall-style setting both from moderators and undecided voters seated with them on stage, a format that typically rewards candidates who show empathy and connect with the problems facing Americans.

But Trump suggested Sunday that he had other priorities. He tweeted a link to an interview with Juanita Broaddrick on the pro-Trump Breitbart website in which she describes what the site calls “brutal rapes” by former President Bill Clinton.

Broaddrick’s lawsuit against Bill Clinton accusing him of rape was dismissed in 2001 and criminal charges were never filed. Clinton has denied the allegations.

Trump has long hinted he would raise Bill Clinton‘s sexual history at debates. In what was billed as a videotaped apology for the 2005 videotaped remarks, Trump said “Bill Clinton has actually abused women” and Hillary Clinton “bullied, attacked, shamed and intimidated” her husband’s “victims.”

Giuliani pushed the same accusations hours before the debate, saying Clinton was the “leader of the attack” against the women her husband “sexually assaulted, sexually abused.”

“If that is how he chooses to spend his time in the debate then that’s his decision,” Clinton communications director Jennifer Palmieri told reporters. “I’m not sure that’s what voters are going to want to hear.”

At a fundraiser in Chicago, President Barack Obama called Trump’s rhetoric “disturbing.” Obama said “it tells you that he’s insecure enough that he pumps himself up by putting other people down.”

Trump’s risky move comes as he tries to save a flailing campaign facing unprecedented opposition from within his own party. His own running mate, Indiana Gov. Mike Pence, declared he could neither condone nor defend the remarks in the video.

Other Republicans took the extraordinary step of revoking support for their party’s nominee. Among them: Ohio Sen. Rob Portman, New Hampshire Sen. Kelly Ayotte — both are running for re-election — and the party’s 2008 nominee, Arizona Sen. John McCain. Some called on Trump to quit the race.

“I thought about years from now when my daughter Kate is old enough to know what is in those tapes and to understand what he is talking about,” Ayotte said of her 12-year-old daughter during a press conference Sunday. “I want her to know where I stood.”

Trump spent Sunday morning highlighting Twitter messages from supporters who slammed Republican leaders for abandoning him. In his own message, Trump said, “So many self-righteous hypocrites. Watch their poll numbers — and elections — go down!”

Republican leaders scheduled a rare Monday conference call for House GOP lawmakers, who are on recess. An email obtained by The Associated Press doesn’t specify the topic, but rank-and-file lawmakers believe it’s about Trump.

The latest firestorm was sparked by the 2005 video obtained by The Washington Post and NBC News. Trump, who was married to his current wife at the time, is heard describing attempts to have sex with a married woman. He also says that when you’re a star, “you can do anything.” Trump adds seconds later: “Grab them by the p—-. You can do anything.” He said of his impulse to kiss beautiful women: “I don’t even wait.”

The Republican National Committee is considering how to move forward. One possibility: re-directing its expansive political operation away from Trump and toward helping vulnerable congressional candidates. Such a move would leave Trump with virtually no political infrastructure in swing states to ensure that his supporters vote.