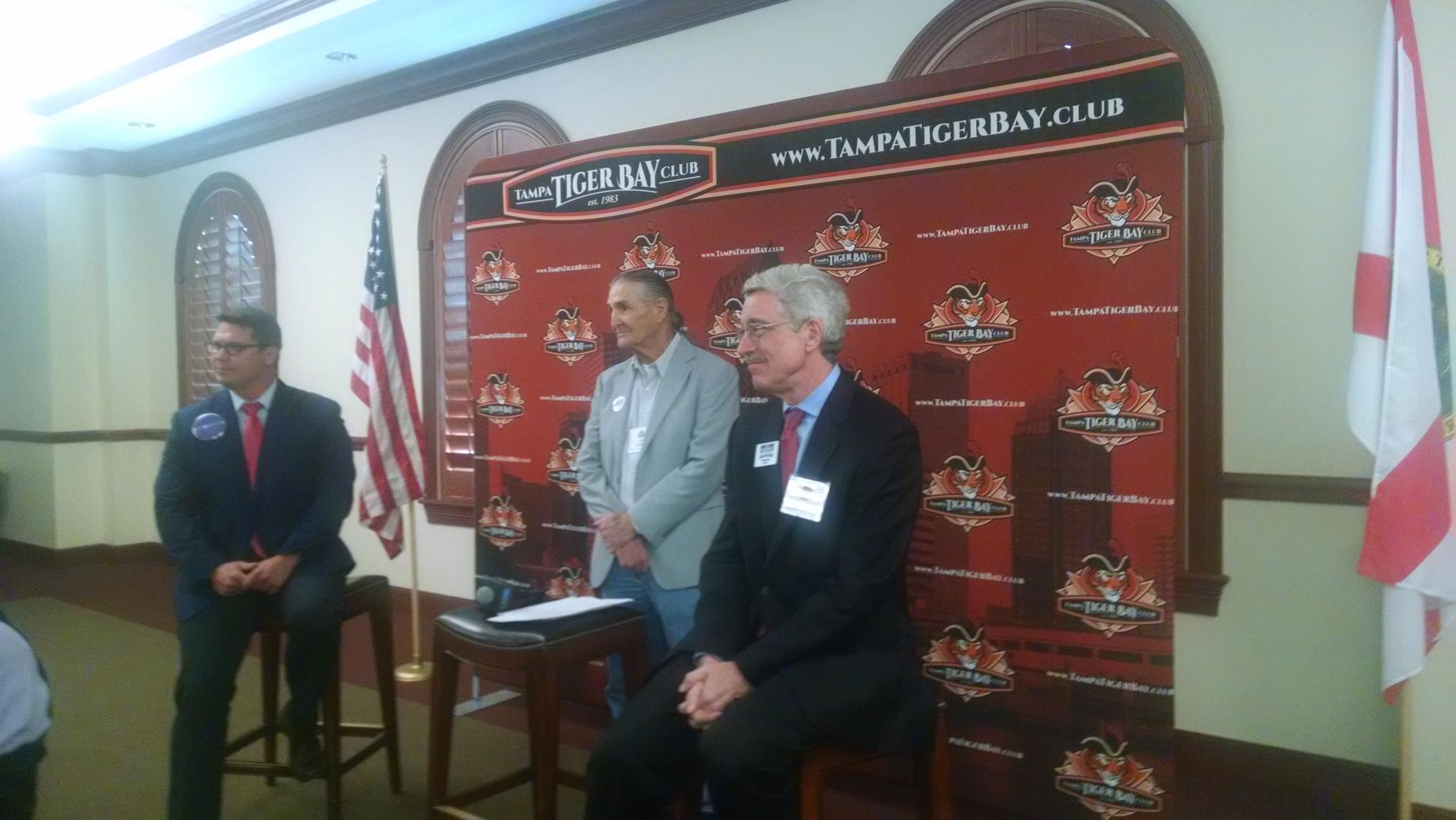 Although Dana Young was a no-show at a Tampa Tiger Bay Club meeting on Friday, her presence was definitely felt as she was the target of several attacks by her three opponents in the state Senate District 18 race.

Saying it was the sixth candidate forum where she has failed to appear, Democrat Bob Buesing said she was intentionally avoiding answering the voters’ questions about her “extreme record,” because “it’s not a match for our community.”

Young did not attend Friday’s forum because she was attending the funeral of Louise Lykes Ferguson, which took place at 11 a.m., followed by a noon reception, the exact same time the Tiger Bay forum was commencing. Tiger Bay had originally scheduled the debate in September, but Young was unable to attend that forum.

“It is incredibly insulting that Mr. Buesing and Mr. Redner continue to criticize Rep. Young for attending the funeral of a local civic icon rather than this lunch event,” said Young campaign manager Chris Spencer. “The assertion that Rep. Young is avoiding discussion with her opponents is false. She has agreed to participate in a candidate forum Nov. 2 at the University of Tampa.”

On the issues, Buesing said Young “chose to lie” regarding her vote on a fracking bill that came before the Florida House this past session. Young has said that she opposes fracking and supported the bill because it was the first step toward a permanent ban on the controversial practice, which involves drilling down into the earth before a high-pressure water mixture is directed at the rock to release the gas inside.

“She got caught by Politifact for trying to mislead the voters,” Buesing said. “And now she’s trying to smear my stellar reputation with a million dollars worth of TV ads full of ridiculous falsehoods. I wish she had instead used that money for low income kids to learn how to swim, or learn how to read in after-school programs.”

Buesing’s attorney contacted local broadcast and cable news stations this week, calling on them to pull an ad produced by the Florida Republican Senatorial Campaign Committee that claims the Tampa attorney had foreclosed on retirement homes which threatened “senior citizens with homelessness,” and defended Wells Fargo Bank in a Ponzi scheme case. A previous ad produced by the FRSCC said Buesing had profited from government waste and abuse in association with the infamous “Taj Mahal” courthouse project in Tallahassee.

Buesing has worked for 39 years at the Tampa law firm of Trenam Kemker, which was involved in the cases referenced in the ads. His attorney says it is “false, misleading, and deceptive.”

“With regards to commercials detailing Mr. Buesing’s shady business background, it would appear this is just another example where the truth is hard for Mr. Buesing to accept, just as he refuses to accept the fact that Rep. Young categorically opposes fracking in Florida,” Spencer said.

In addition to the two major party candidates, adult club impresario Joe Redner and Sheldon Upthegrove, a staff sergeant who works at U.S. Central Command at MacDill Air Force Base, are also on the ballot.

Redner blasted Young for her voting on the fracking bill.

“She’s a liar,” he said with venom in his voice. “It’s what she does.” And he came to Buesing’s defense when it came to the ads produced by the Florida Republican Senatorial Campaign Committee. “Nothing but lies and misinformation,” he stated (Redner alerted the media earlier on Friday to four billboards he had paid to advertise on in the district where he called out Young for ducking the debates).

Buesing said he and Young are on the same page when it comes to their disdain for the beleaguered Hillsborough County Public Transportation Commission. Recent revelations that PTC executive director Kyle Cockream was working with officials from the taxicab and limousine industry to bust Uber and Lyft drivers in a sting operation compelled Young earlier this week to call on the FDLE to investigate the agency. Buesing wasn’t ready to completely dismiss the agency, however, saying that it was crucial that ridesharing be part of the transportation mix in the county, and “if I have if I have to eliminate the PTC to get there, I’ll do it.”

Upthegrove said he was surprised by Buesing’s opinion, saying, “the Democrats usually side with the unions.”

When it came to the issue of money in politics, Buesing said it was “out of control.”

Redner said this could be the year an independent could break through, and boasted he could do what the citizenry wanted because, “nobody can tell me what to do,” adding, that “nobody has ever told me what to do.”

Upthegrove said he receives three to four mailers for and against both Buesing and Young nearly every day.

“It all comes down to money,” he said of how campaigns are run (Upthegrove has raised only $2,500 in the campaign, by far the lowest of the four candidates). “It all comes down to the way that the laws are written right now are in favor of these PACS being able to funnel almost $3 million into a campaign.” He said that laws needed to be rewritten to find ways to even the playing field.

While Florida could have a record turnout at the polls when this election is all said and done on Nov. 8, 1.6 million citizens of voting age are locked out of the polls, due to the fact that — unlike almost every other state —ex-felons don’t get their right to vote automatically restored when they have completed their sentence.

While Redner and Buesing supported the automatic restoration, Upthegrove was less enthusiastic about that possibility, saying, “I do not agree that we should [restore] all rights carte blanche.” (The petition being circulated to get on the 2018 ballot would not apply to those convicted of murder or sexual offenses).

All four of the candidates say they support Amendment 2, the medical marijuana initiative on the ballot. The 76-year-old Redner survived stage-four lung cancer a few years back, and said medical marijuana was crucial in alleviating the pain he was going through while taking chemotherapy.

“You get in your chair and you feel like you can’t stand your skin, and you eat some of that blessed marijuana and you relax into your chair and you can do things. Exercise. Ate good,” he said. Redner also added that the powers of pot allowed him to stop doing other drugs and alcohol that he used with regularity back in the 1980s.

“I smoked. I drank. I did all those things and I wanted to quit so bad,” he recounted, saying that smoking marijuana compelled him to “quit it all. Everything in one fell swoop. I quit all debilitating drugs with marijuana!” He said it was obscene that sick people were denied the herbal substance.

A survey conducted last week by St. Pete Polls showed Young leading Buesing in the race, 38 percent to 32 percent, with Redner getting 16 percent, and Upthegrove at 3 percent.

There are some Democrats concerned that Redner’s popularity and name recognition will hurt Buesing and pave the way for Young. In his concluding remarks, Redner said, “there’s nothing wrong with Bob. But he’s no Joe Redner,” as the audience laughed.

Buesing countered that, saying, “There’s only one candidate up here who can beat Dana Young: that’s me,” he said, adding, “Being a solo act in the state Senate isn’t going to do us any good. You’ve got to work within a system to be successful,” a shot at the independent-minded Redner.

Voting by mail for the SD 18 seat is currently underway. Early voting in Hillsborough County begins on Monday.