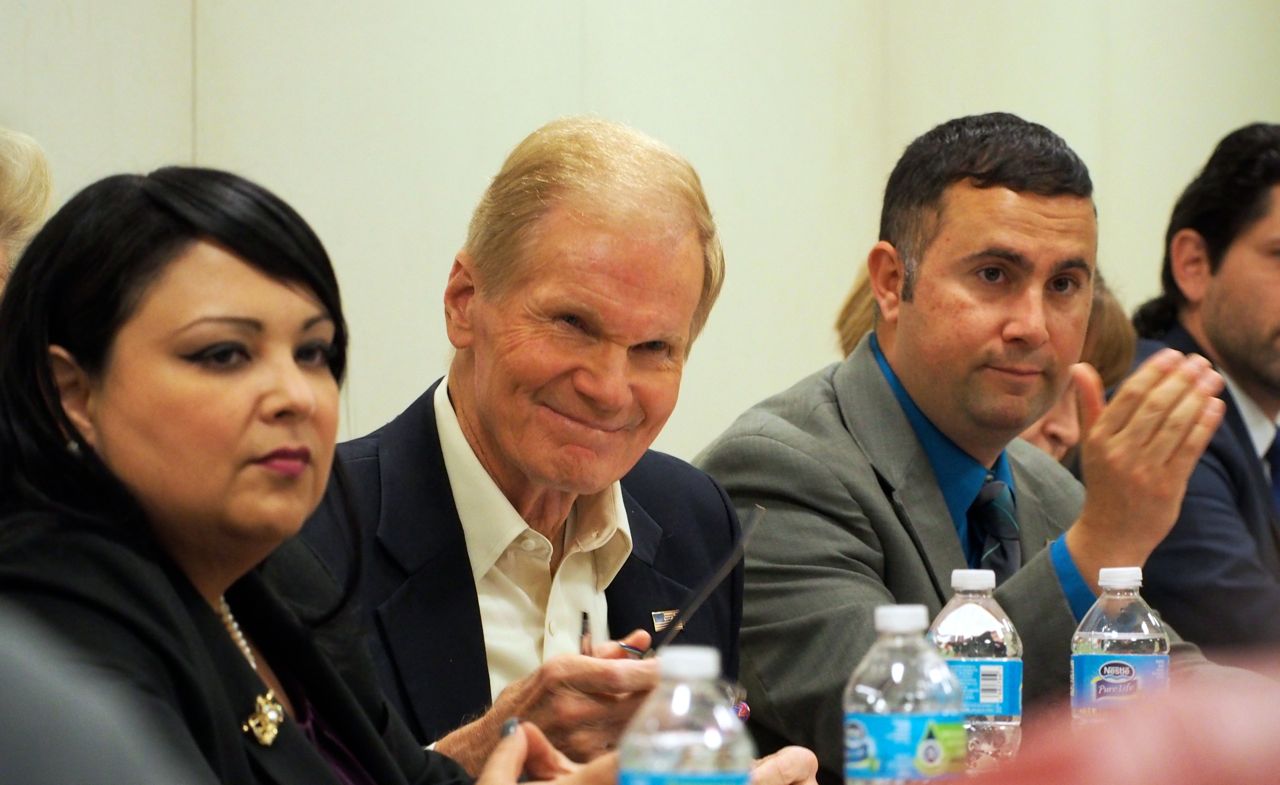 Meeting with a bipartisan roundtable of Puerto Rican leaders in Kissimmee Tuesday, Florida’s Democratic U.S. Sen. Bill Nelson expressed both hope that current Puerto Rico “rescue” plans being developed will help, and concern that not all the details they want can be delivered.

Nelson, Congressman-elect Darren Soto and Osceola County Commission Chairwoman Viviana Janer met with 15 Orlando- and Kissimmee-area Puerto Ricans to hash out what they hope for through Congress and the Puerto Rico Oversight Board the lawmakers created last summer with the PROMESA Act.

The island territory is wracked in debt; a downward-spiraling economy; an exodus of people, particularly doctors, lawyers, and other professionals; and a double-whammy health care crisis combining lack of health care money and the rise of the Zika virus. Schools and hospitals are closing. Fire and police departments are cutting back. Business and jobs are draining away.

“Needless to say, they are suffering,” Nelson said.

But in speaking to the press earlier, Nelson cautioned, “The austerity measures are indeed hurting folks. But there has to be austerity measures because you can’t spend money that you don’t have, and that’s what’s been going on for the last several years.”

“Osceola County is more than 50 percent Hispanic with most of them being Puerto Rican. I myself, I was born on the island and still have close family ties there. And I think that’s what this is all about. All of us in one way, shape or form is connected to the island of Puerto Rico,” she said. “When Puerto Rico is doing poorly, we’re doing poorly. When they succeed, we will succeed. We care what happens.”

The oversight board is a new federal authority charged with pushing through tough-love economic measures, many of which Congress will have to adopt. And while Nelson made it clear to the gathering the board will administer the economic rescue, he cautioned that many of the hopes of the people there, and their friends and relatives in Florida, will have to accept that bipartisan disagreements will lead to difficult compromises.

A bipartisan, bicameral task force in Congress, which includes both Nelson and Florida’s Republican U.S. Sen. Marco Rubio, is overseeing the oversight board, and will recommend reforms to Congress. The task force must report by Dec. 31. Rubio held a similar roundtable in Orlando in October.

“What we are trying to do is a rescue package, and we, the task force, were given the task of coming up with the recommendations,” Nelson said.

Nelson said he hopes to see the first important reforms, “relative relief, uncontroversial measures,” passed in this Congress, through the budget bill. He said he expects it to only be a three-month continuing continuing resolution, but cited it as the best shot.

Among the key points Nelson and Soto said they expect will pass: some sort of increase in Medicaid funding for island residents, seeking to bring them into parity with stateside Medicaid recipients; childcare tax credits for Puerto Ricans; some sort of small business loan program to help entrepreneurs; and some way to address the Zika virus, which now has affected an estimated 20,000 island residents, including 2,500 pregnant women.

Other key issues, including how the territorial government will address $69 billion in debt to bondholders and a huge shortfall in its $43 billion pension system, remain uncertain challenges, and still others drew debate even among the roundtable panelists.

Some in the roundtable called for the need to protect corporate investors so they will feel comfortable investing in Puerto Rico and Puerto Rican business ventures in the future. Others insisted the territory must get the chance to refinance its debts. The Jones Act — the 96-year-old maritime law — was cited as costing the island and its residents enormous amounts of money. The corporate tax exemptions in Puerto Rico were debated. The prospect of a minimum-wage cut for islanders looms, under PROMESA.

“We are here simply because our brothers and sisters on the island of Puerto Rico need our help,” said Soto, the first Puerto Rican elected to Congress from Florida. His district includes all of Osceola County. “While we face recession, they face a catastrophe of monumental economic depression.”

Phillip Arroyo, a Democrat active in politics, decried what he said has been longstanding corporate exploitation on the island.

“If Congress, if this nation, bailed out Wall Street, I think Puerto Rico should be bailed out as well,” he said.

Anthony Suarez, a Republican active in politics, noted that Puerto Rico Gov. Alejandro Garcia Padilla refused to enact austerity measures ordered by the oversight board, saying he is posturing, trying to make the board look like “the bad guy.”

All of it underscored Nelson’s and Soto’s warnings that the answers will require tough compromises that will hurt as they help.

Soto cautioned that there are those who want the relief to be distributed to the top and trickle down, and said, “I’m hopeful that economic relief will go directly to the people of the island.”

previousHow to get around Richard Corcoran's new rules — Volume 2