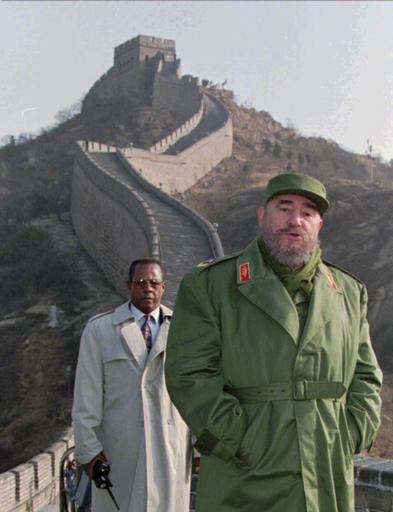 There was no harsher a critic of the Fidel Castro regime in Cuba than Ralph Fernandez. Yet the Tampa attorney who represented several former political prisoners in Cuba over the past several decades says that nobody ever challenged the U.S. government as the longtime Cuban leader, who died Friday at the age of 90.

“The guy stood up to America like no one could. He represented a shrimp of a country, just a dot on the map, and he was just in our face, and he became the advocate for an entire Third World,” Fernandez said Saturday morning. “We have to acknowledge that he was the most eloquent, articulate speaker of the Spanish language of all time. He was brilliant. He was evil. He was one of a kind.”

But Fernandez also compares Castro to some of the evilest men who ever walked the earth.

“It’s great news, but it’s way late. Now he’s gone off to spend time with his friends: Adolf Hitler, Josef Stalin, and Pol Pot and the rest of the gang, if there’s a hell, he should be there for eternity.”

There is no official registry of the number of victims who were killed during Castro’s reign in power, which lasted from 1959 until he stepped down as president in 2006 because of health issues, ceding power to his brother Raul. An analysis performed by necrometrics.com put it between 5,000-12,000 executions. Fernandez claims it was 30,000, with another 200,000 imprisoned over the years on human rights violations, and “a third” of the population leaving the island to become exiles.

Al Fox is perhaps the best-known advocate in Tampa for advocating for opening relations with the Cuban government. Since creating the Alliance for Responsible Cuba Policy Foundation in 2001, he’s taken more than 100 trips to the Communist island, and he is fierce in criticizing those who deride Castro’s Cuba as a wasteland for its people.

“He took a country that 70 percent of all the land was owned by foreigners, and he gave it to the people,” Fox said. “And he took a country where only the elite were educated, and only the elite had proper medical care, and today you have a country of 11.5 million, and the people of Haiti, El Salvador, Nicaragua, Honduras — they all wish they could live like a Cuban lives, but the perception out there is the complete opposite.”

Tampa Mayor Bob Buckhorn has been a steadfast critic of the Castro regime, and has refused to join the Greater Tampa Chamber of Commerce, the Tampa City Council and others who have been calling for a Cuban consulate to be located in Tampa after the breakthrough in diplomatic relations set forth by President Barack Obama in December 2014. In a statement, he said that generations of Cubans have helped build Tampa.

“Many arrived in our City fleeing the totalitarian policies of the Castro government with nothing more that the shirts on their backs and a yearning for freedom,” Buckhorn said. “They have never strayed from the belief that one day Cuba would again be free. The passing of Fidel Castro offers hope that one day the Cuban people will enjoy the benefits of a free and democratic society.”

No Florida lawmaker was more than Marco Rubio, who called Castro an “evil, murderous dictator who inflicted misery and suffering on his own people” and turned Cuba into an “impoverished island prison.”

Although there was cheering in Miami overnight about the news, the mood was more downcast in Havana, according to CNN. Fox says that despite what others say, there are many Cuban people supportive of Castro to this day.

“He is revered in Cuba,” Fox says. “When Saddam Hussein was toppled, the people went dancing in the street, OK? You watch what’s going to happen in Cuba (referring his funeral next week). He was an absolutely revered, but the perception is that he was hated.”

Tampa-area Democratic Congresswoman Kathy Castor, who after traveling to Cuba in 2013 became the first Florida lawmaker to call for the end of the U.S. imposed sanctions on the Cuban government, said that she fears that Donald Trump will reverse the diplomatic measures that Obama has implemented over the past couple of years.

“Slamming the door shut at this point in time would be disastrous,” she said.” Instead, Fidel Castro’s death should encourage all of us to meet the challenge of better diplomatic relations, economic opportunities for Cubans and Americans, expanded travel, and support for the dignity of the Cuban people.”

On that point, both Fernandez and Fox agree that they do not see Trump reversing much of what Obama has done.

“There will be no wall, Obamacare will not be repealed in toto, and there will be no aggressive positioning in terms of the Cuba situation,” predicts Fernandez. “That genie’s out the bottle,” adds Fox.

previousFlorida leaders react to the death of Fidel Castro