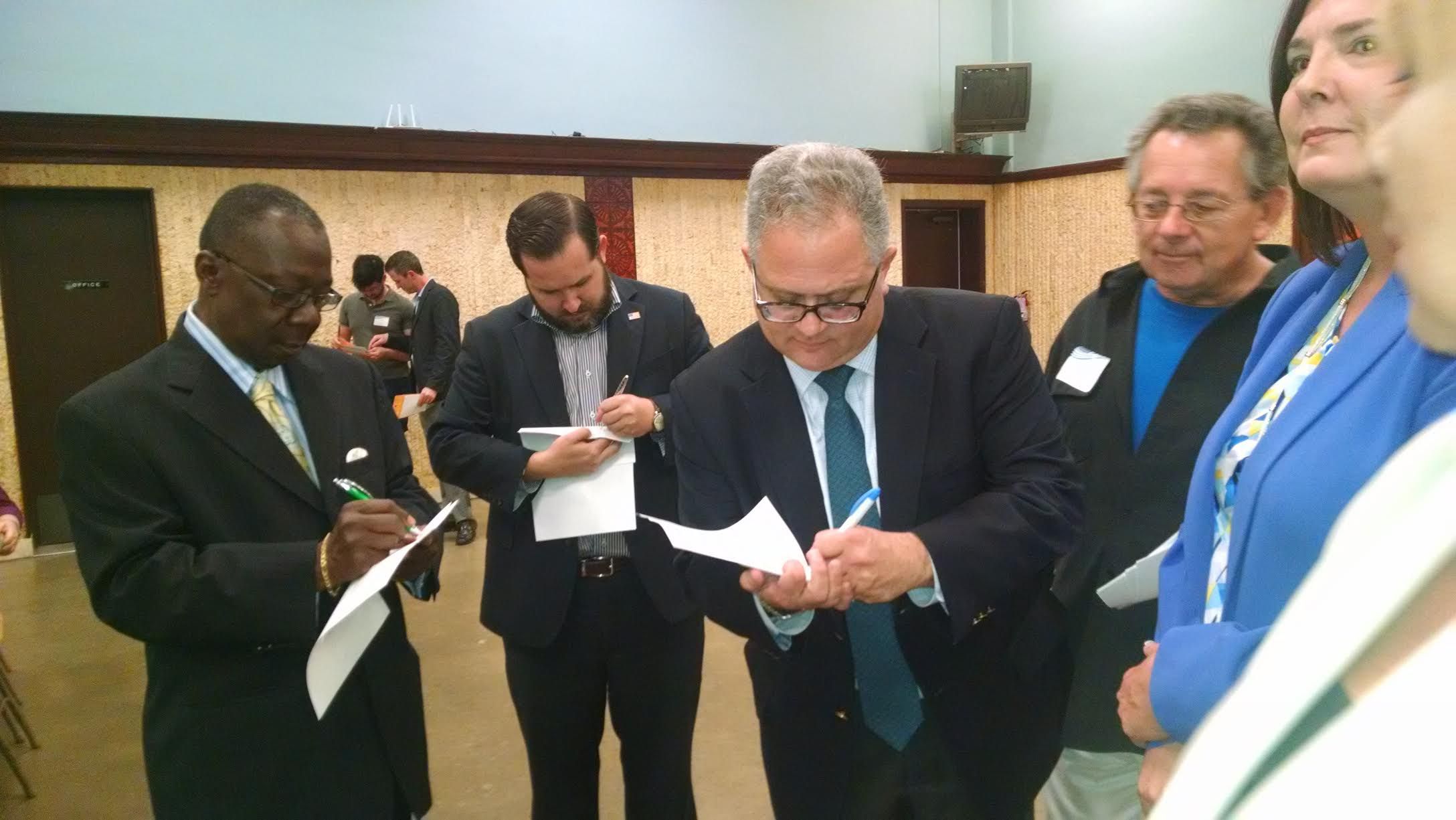 A raucous first 50 minutes of the group’s reorganization meeting culminated in five Tampa City Council members and two Hillsborough County school board members leaving the hall in disgust when they were not allowed to participate in the Democratic Executive Committee election for local officers.

In a related development that skewed the final tally of his race, Alan Clendenin, vice-chair of the Florida Democratic Party and a man considered a serious contender for party chair next year, lost his race for state committeeman to Russ Patterson, 42-30.

It was thought that many of those elected officials who were not allowed to vote supported Clendenin.

Townsend sparked the controversy when she announced two weeks ago that, in consultation with Florida Democratic Party Rules Committee members, she interpreted party by — laws to mean that it would not permit Democrats elected in nonpartisan races to vote in Monday’s meeting. In addition to party chair and committee members, that included other party leadership positions.

For more on the details on her decision, read our Friday story.

That meant that the five members of the City Council and two school board members who attended the meeting were not allowed to vote, and they began shouting out at Townsend after she announced her ruling at the Letter Carriers Hall in West Tampa.

“You’re out of order!” shouted Councilwoman Yolie Capin. “What you just said was out of order. We’re elected officials who are registered Democrats. That is outrageous what you have just said!”

“This is a great way to grow the tent,” Tampa City Councilman Harry Cohen bellowed disdainfully.

“Politics is a game of addition, not subtraction,” shouted School Board Chair April Griffin, who stood with colleague Susan Valdes, also banished from voting.

“Since 2006, I stood against the far right on the school board, and you’re telling me I don’t have the right to vote?” she asked.

Townsend said she would allow the elected officials to vote with a provisional ballot if her decision was appealed to the Florida Democratic Party judicial court.

But DEC member Bryan Ferris made an official objection, and he called for a vote to overrule Townsend.

Mike Suarez, the current chair of Tampa City Council, took to the microphone to question how his Democratic Party bona fides could be challenged.

Suarez said he had recently queried some of the candidates running for the Democratic National Committee Chair.

“I think I’m not only loyal, but as an elected official I represent all Democrats,” he said. “If that’s not good enough for you, I don’t know what else to say about being a Democrat.”

Nevertheless, those statements weren’t enough to carry the day, as Ferris’ motion did not get the required two-thirds vote to override Townsend’s decision.

Griffin also took a microphone, stood behind the podium and went off on a verbal tear.

“We are here to build this party up, not tear it down,” Griffin said. “We are better than this. We are the party of intellect, the party of compassion. We are looking like a bunch of circus freaks.”

That irked Democrat Andrea Brayboy, who replied: “I am ashamed of you people in the back.”

Looking at the council and school board members, Brayboy said: “You come here and acted like children. I won’t have that. The rules are what the rules are. Let’s just get on with it and move on!”

Tension in the room remained as the voting members were poised to vote.

“I want to see who votes against us,” Capin said.

After the vote had come down against the elected officials, Griffin yelled out she wanted her name removed from the Hillsborough DEC’s website.

Maria Ayala, the DEC credentials committee chair, yelled back: “Yolie Capin, don’t expect us to volunteer for you.”

The vote probably didn’t affect the overall count for Clendenin, but the loss was a bitter one for him and his supporters, who were looking to put on a full-fledged campaign for the state party chair next month. Clendenin lost to Allison Tant by just 80 votes, 587-507, in January of 2013.

Clendenin’s rejection came despite getting verbal support from former Florida CFO and 2010 gubernatorial nominee Alex Sink. “He has been a very, very effective voice and has perspective and history at both the state and the national levels, and is an important voice for Hillsborough County,” she said.

But the majority of rank and file Hillsborough DEC members felt otherwise, seemingly killing his chances of running for state party chair. FDP rules state that only party chairs or committeemen or committeewomen are eligible to run for the top post.

“As your state committeeman, I promise you that I won’t be a rubber-stamp for more of the same,” said Patterson in his speech to the DEC members.

Yvette Lewis, political action chairwoman for the Hillsborough County branch of the NAACP, said she was appalled by what she had seen earlier, calling it another form of disenfranchisement by a party who says they’re about inclusion. “I’m very disappointed in some of the people who are here.”

DEC member Mark Nash criticized the elected officials however, accusing them of “grandstanding,” and asking why they haven’t found the time to attend any previous DEC meetings in recent years.

The meeting was held at the spacious Letter Carriers Union in West Tampa, a move from the party’s usual meeting headquarters at the Children’s Board of Hillsborough County in Ybor City. A huge new influx of new members necessitated the change.