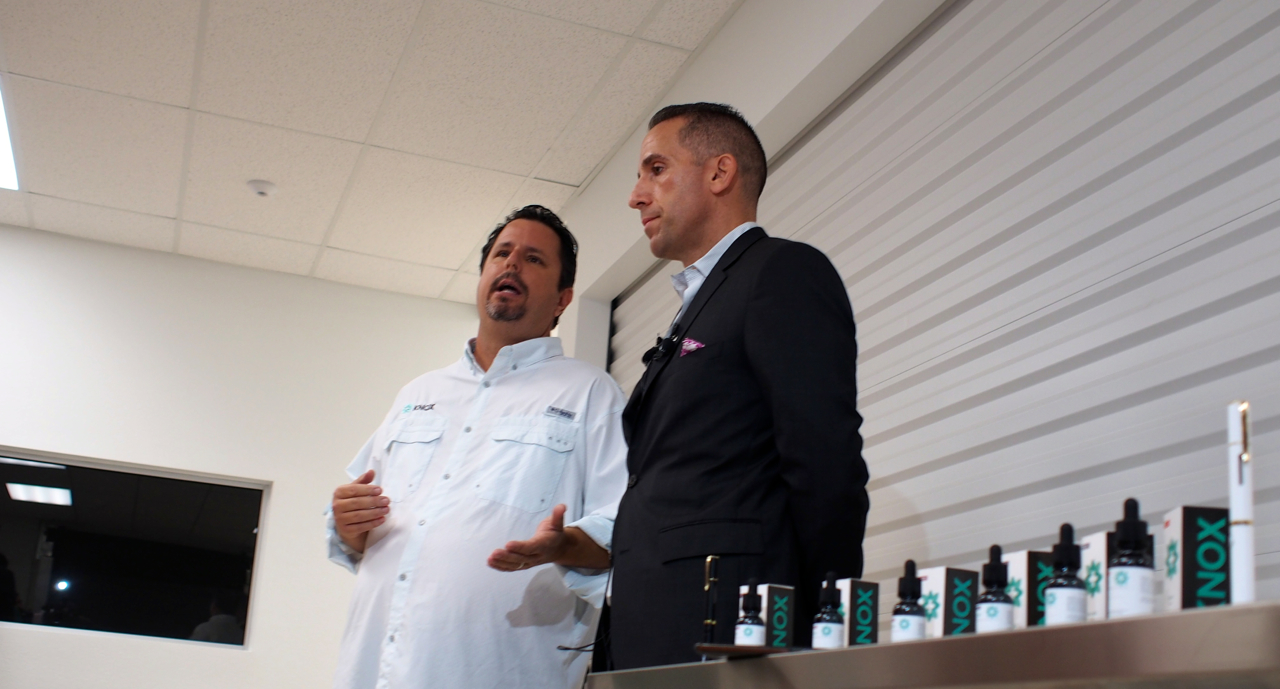 Behind barbed-wire fences and armed guards, an unmarked, nondescript block building invisible from the road features countless surveillance cameras, a walk-in safe, explosion-proof rooms, and labs stocked with equipment that would make any college chemistry department envious, such as an inductively-coupled plasma mass spectrometer.

This is not Bruce Knox‘s father’s flower nursery. Not anymore.

Welcome to Knox Medical LLC’s facilities at Knox Nursery in Winter Garden, for what company officials Knox and Jose Hidalgo vowed would be the first and only public viewing ever of the Central Florida production center for medical marijuana in the Sunshine State.

It’s been more than two years since Florida approved limited medical marijuana, a year since Knox and five other plant growers in Florida received state licenses through a highly-contested competition to get into the business’s ground floor, eight months since the Florida Legislature made limited expansions to the industry, and a month since voters approved John Morgan’s Amendment 2, authorizing huge expansions of medical marijuana next year.

On Friday Knox will make its first product deliveries, medical oils extracted from legally-grown, non-euphoric marijuana, delivered to qualified patients with otherwise untreatable epilepsy or other neurological disorders. It’s a modest beginning for what is still an undefined future, one which could grow to hundreds of thousands of Florida patients using all sorts of medicines derived from marijuana, for all sorts of debilitating health conditions.

“What you see is a culmination of a dream and a vision that we’ve had now for two and a half years,” said Knox, co-founder with Hidalgo of Knox Medical, and president of Knox Nursery, a business his family started 55 years ago. “A world-class, state-of-the-art processing facility… which will ensure the highest-quality product to our patients in the state of Florida.”

Knox Medical’s production center is the only facility currently licensed to grow in Central Florida but can sell anywhere in Florida. Starting Friday and for the foreseeable future the company will use unmarked vans to deliver, to the homes of state-approved patients, the oil extract based on a branded product in Colorado known as “Charlotte’s Web.” Knox’s oil, like that alternative medicine, will be extracted from marijuana plants cultured to have a very-low level of the chemical THC that gets people high and a very-high level of the chemical CBD, which experiences in Colorado and elsewhere has shown to have strong therapeutic power to stop seizures and ease other neurological disorders.

It’s not cheap and it’s not covered by health insurance. The going price is about 17 cents a milliliter, which works out to about $100 a bottle, though Knox said the company is working with the Epilepsy Foundation of Florida and another foundation to make it affordable on a sliding scale for patients with financial challenges.

Soon, Knox intends to open unmarked retail dispensaries near Florida Hospital in downtown Orlando, and in Gainesville, Jacksonville, Tallahassee and Lake Worth.

Eventually, Knox intends to start selling other products, including those made from full-strength THC marijuana, and including edible and smokable forms. The 2016 Legislative Session expansion makes some of that possible, and Amendment 2 – once the Florida Legislature and Florida Department of Health codify it – will make far more possible. Knox already is growing high-THC marijuana at an undisclosed site, among some 19 varieties the company is currently cultivating.

And eventually the medical marijuana market, currently limited to just 1,100 qualified patients statewide, is expected to boom, to include everyone from cancer patients seeking something to take the edge of chemo-therapy nausea, to veterans seeking relief from post-traumatic stress disorder.

The 72 percent approval for Amendment 2 on N0v. 8 showed Floridians are ready, Hidalgo said.

“I think education is key. My mom is 72 years old. She was completely freaked out… Just showing her how a suffering child is having 70-plus seizures a day and a single drop of CBD non-euphoric oil and the seizures stopped, she was already on board,” said Hidalgo, president of Knox Medical. “This is a new world, when you talk about pharmaceutical. It’s not quite pharmaceutical. It’s not quite like pot. It’s a new space in medicine. And it’s an exciting time.”