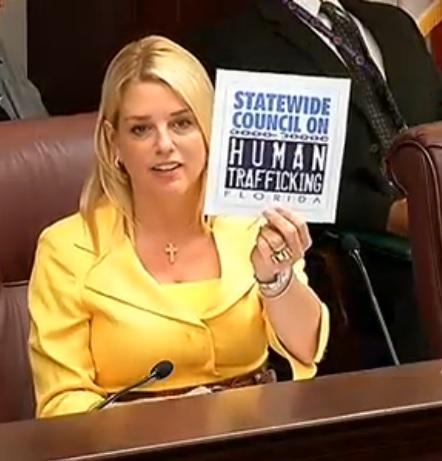 Since beginning her tenure as Attorney General six years ago, Pam Bondi has made the combating of human trafficking in the state one of her signature issues. Appearing at Tampa International Airport on Friday morning, Bondi announced the partnership with the airport to encourage travelers to spot human trafficking and report suspicious activity. They can do so by going to a new website, YouCanStopHT.com.

Bondi said regular citizens can act as the eyes and ears to observing and reporting such transgressions, citing an Uber driver out of Sacramento last week who grew suspicious after picking up a 16-year-old girl (who he originally suspected was only 12) and contacted local police. The teenager was being sold for sex at a Holiday Inn, the police reported, and her eavesdropping Uber driver had saved her. “That is proof that one person…can make a difference if you know what to look for, because sadly it is all around us,” said Bondi.

“The awareness program will be made available for all of our employees,” said Tampa International Airport Police Chief Paul Sireci.

“We’re trying to save that one person who’s drowning out there,” said Pasco County Sheriff Chris Nocco, who said he wanted to deliver a message to the people who might be sexually trafficked right now: “Your captors are lying to you,” he said, adding that his department only wants to help such victims, assuring them that if they come forward they won’t be going to jail. “You’re a victim. And we’re going to treat you like one.”

And Bondi, who joined a lawsuit with other Republican attorneys general in December of 2014 disputing President Obama’s executive order granting additional protections to millions of undocumented immigrants, said that the undocumented who are being enslaved should not worry about their status if they come out of the shadows.

“That is often how your captor will keep you – by saying we will grab you, and we will deport you, and you are not a victim. That will not happen,” she said, insisting, “We will protect you. We will keep you safe. Because you are a victim.”

Dover House Republican Ross Spano has made the issue of combating human trafficking since being elected to the Legislature in 2012. He said at the news conference that while he didn’t want to “cast any aspersions” regarding Monday night’s national college football championship game in Tampa, but he did say that the ad campaign in Tampa’s airport could only be a plus in trying to heighten awareness this weekend on the issue. Bondi said traffickers bring their victims into cities like Tampa like the NCAA championship game or next month in Houston at the Super Bowl. “That’s why we’re here at the airport.” (Some critics dispute that there are an influx of prostitutes who attend events like the Super Bowl, as this Snopes.com site alludes to).

The state of Florida has over 80 investigations of human trafficking at this time, Bondi said, and over 70 of those cases are active.

Bondi was also asked by reporters about reports about joining Donald Trump’s incoming administration. While she downplayed those reports (which you can read about here), she did say that she has talked about the issue of human trafficking with him, and said that he is “committed to fighting human trafficking in our country.”