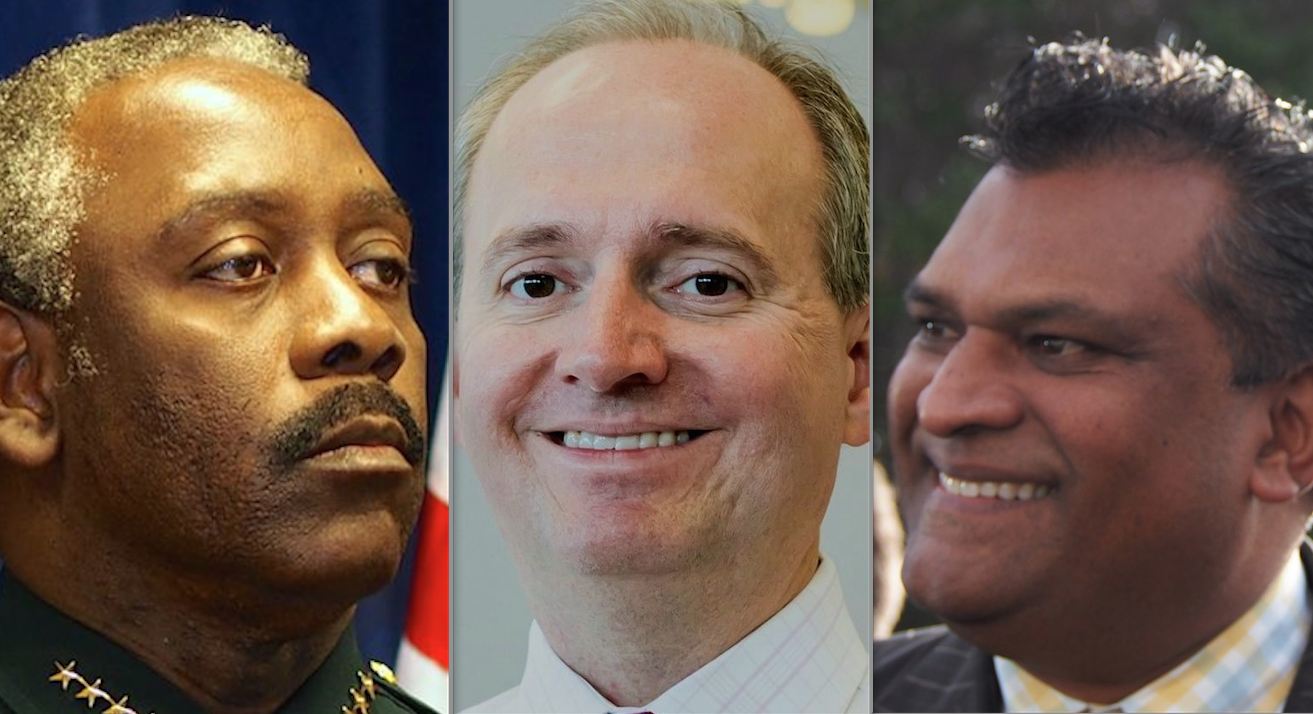 The statewide group that challenged Orange County’s charter amendments and obtained a court order staying their enactments appears to be entirely run by three Orange County officials who would be affected by the changes, Sheriff Jerry Demings, Tax Collector Scott Randolph, and Property Appraiser Rick Singh.

Paperwork at the Florida Division of Corporations shows that the Florida Association For Constitutional Officers was incorporated as a not-for-profit group on Dec. 13, with Demings as president, Singh as secretary and Randolph as treasurer.

On Dec. 22, the association sued Orange County to stop implementation of Orange County Charter Amendment Questions 2 and 3, which were approved by voters in the Nov. 8 election with about 70 percent yes votes on each. On Tuesday Judge Bob Leblanc of Florida’s 9th Circuit Court issued a temporary stay sought by the association. That order blocks any enactment of the amendments, which were to have gone into effect Wednesday, affecting the status of six elected constitutional posts in Orange County, including Deming’s, Singh’s and Randolph’s.

None of the three officials had signed onto the lawsuit individually, though Demings did submit an affidavit attesting to his belief that they would cause “significant and irreversible harm” to his office’s ability to carry out its duties.

The revelation that the challenge appears to be entirely from Demings, Singh and Randolph, rather than from a broad statewide organization on their behalf, reinforces the perception of a partisan political nature of the ongoing battle between the trio, sometimes joined by other Orange County constitutional officers, versus the county’s governing leadership of Mayor Teresa Jacobs and the board of county commissioners. Demings, Singh and Randolph all are Democrats, as are the lion’s share of Orange County voters, while Jacobs and the majority of the county commissioners are Republicans.

In an email, Demings described the association as something anticipated to grow bigger than just the trio of Orange County officers.

Such an organization could allow them to use tax dollars – paid to the association as professional dues – to prosecute the lawsuit. However, Demings said that’s not happening.

“At this point, we have not spent taxpayer dollars on the litigation filed in Orange County,” he added. “Membership in this organization and its dues structure will be no different than what is found in the many other associations serving elected and public officials. We anticipate that our membership will grow rapidly in the coming months.”

He declined to comment on the arguments within the lawsuit, as did Singh, Randolph, and Jacobs office.

Still, Demings’ characterization of the association’s desire to preserve “the independence of constitutional officers” is at the heart of the lawsuit, and of the dispute between Jacobs and the trio over what, exactly, the two charter amendments do, or would do. And that characterization is in dispute.

Throughout the past year the trio and other Orange County constitutional officers fought against moves to transform the offices into charter offices, arguing it would usurp their vital independence. Now retired Orange County Comptroller Martha Haynie repeatedly implored county officials to not put the measures on the ballot because she was convinced they would taint the comptroller’s office’s ability to watchdog the rest of county government.

The Orange County mayor’s office and the county attorney’s office have vigorously denied the charter-authorized offices would lose any independence, pointing out that the charter amendments’ language explicitly calls for all powers, duties, rights and privileges of the offices to be maintained.

The question of independence is in fact one of the contested allegations of the lawsuit, which charges the charter amendments would “impugn upon and chip away at the independence of the Constitutional Officers.”

“It is my believe that that is something that is being threatened in many ways, and not just within Orange County,” Demings old Orlando-Rising.

Many of the same issues and questions raised in and about the lawsuit also are part of another lawsuit involving another voter-approved Orange County charter amendment the trio successfully challenged last year. That one, involving a 2014 case that would have imposed term limits and non-partisan status on the offices without transforming them into county charter-authorized offices, is being appealed in Florida’s 5th District Court of Appeals.