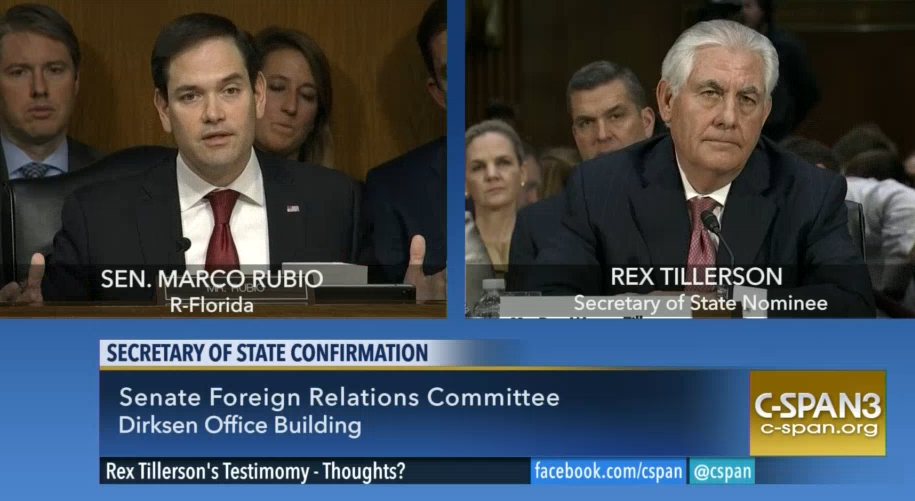 U.S. Sen. Marco Rubio‘s concerns regarding Russia and Russian President Vladimir Putin took center stage in Senate confirmation hearings Wednesday when he grilled Rex Tillerson over whether the secretary of state nominee believes Putin is a war criminal, and whether he believes Putin was directly involved in cyber attacks to affect the 2016 American election.

Tillerson said he was not willing to call Putin a war criminal without having more information, all but visibly infuriating Rubio.

However, the nominee of president-elect Donald Trump did say that the reports he has read on Russian cyber interference attempts with the American election are “clearly troubling” and that the assumption that Putin was involved is “a fair assumption.”

Rubio’s entire time questioning Tillerson focused on Russia. He began by questioning Tillerson about the reports that Russia ran a broad hacking campaign and then leaked the gleaned information to harm Democrat Hillary Clinton‘s candidacy and to forward Trump’s. When Tillerson first demurred about whether he believed Putin was directly involved, Rubio pressed, pointing out that the Exxon-Mobile CEO’s long, personal relationship with Russia and direct dealing with Putin, and demanding to know if  he had an opinion that Putin most likely would have been involved.

Next, Rubio turned to a bill that he and a bipartisan coalition of senators rolled out Monday, which would impose a variety of sanctions on Russia for the  election campaign hacking, and for other Russian international aggressions in Ukraine, Syria and elsewhere. Would Tillerson advise the president to sign it?

Tillerson declined to say, noting he would need to know all the facts.

Rubio grew frustrated. He pressed if Tillerson would support sanctions against any country involved in cyber attacks on the United States.

Again, Tillerson said he would need more information, and that the full circumstances would have to be considered.

When Tillerson mentioned trade considerations, Rubio responded, “What’s troubling about your answer is the implication that if there is a country that we’re trying to improve relations with or have significant economic ties with, you may advise the president not to impose sanctions on that country or individuals in that country, out of concern that it may damage our relations with them, on a cyber attack, which is a direct attack on our electoral process.”

Rubio asked Tillerson if he would advise Trump to appeal Obama’s executive orders to sanction Russia over the cyber attacks. Tillerson said he would have to look at it and consult with others in the administration. Ultimately, Rubio got him to say he would not automatically support such sanctions against Russia.

Then came the show-stopper.

“I would not use that term,” was Tillerson’s first response.

Rubio then went on a roll, describing reports of the Russian military targeting civilians in Syria, killing thousands, and in Chechnya, killing hundreds of thousands. Tillerson said he would want to have more information. Agitated, Rubio, interrupted him saying, “Mr. Tillerson, what has happened in Aleppo is in the public domain. The videos and the pictures are there.” But Tillerson persisted, saying he would want full classified briefings before advising the president.

“There is so much out there, it should not be hard to say that Vladimir Putin’s military has conducted war crimes,” Rubio responded. “I find it discouraging, your inability to cite that.”

Finally, Rubio asked Tillerson about political prisoners in Russia, and the deaths and disappearances of political dissidents. “Do you believe that Vladimir Putin and his cronies are responsible for the murder of countless dissidents, journalists and political opponents?”

“I look forward, if confirmed, to being fully informed. But I am not willing to make conclusions based only on information that is publicly available or publicly reported,” Tillerson said.