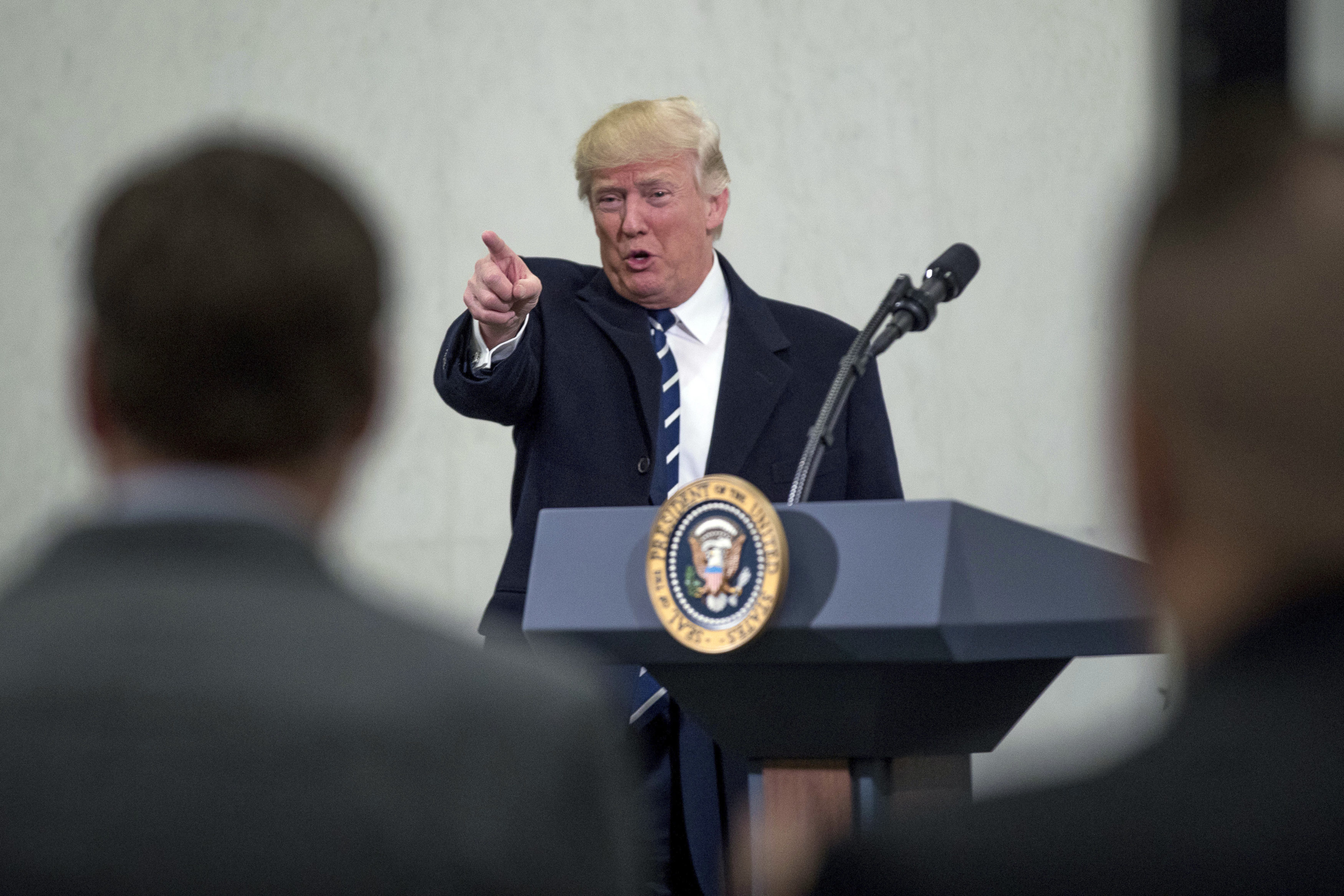 President Donald Trump‘s speech Saturday at the headquarters of the Central Intelligence Agency turned into the latest battle in, as he put it, his “running war with the media.” He had two central complaints: that the media misrepresented the size of the crowd at his inauguration and that it was incorrectly reported a bust of Martin Luther King Jr. was removed from the Oval Office. A look at those assertions:

TRUMP: “I made a speech. I looked out. The field was — it looked like a million, a million and a half people.”

The president went on to say that one network “said we drew 250,000 people. Now that’s not bad. But it’s a lie.” He then claimed that were 250,000 right by the stage and the “rest of the, you know, 20-block area, all the way back to the Washington Monument was packed.”

THE FACTS: Trump is wrong. Photos of the National Mall from his inauguration make clear that the crowd did not extend to the Washington Monument. Large swaths of empty space are visible on the Mall.

Thin crowds and partially empty bleachers also dotted the inaugural parade route. Hotels across the District of Columbia reported vacancies, a rarity for an event as large as a presidential inauguration.

And ridership on the Washington’s Metro system didn’t match that of recent inaugurations.

Spicer claimed that it was the first time white “floor coverings” were used to protect the grass on the National Mall and that it drew attention to any empty space. But the same tarp was used four years ago.

Spicer also said it was “the first time that fencing and magnetometers went as far back on the Mall, preventing hundreds of thousands of people from being able to access the Mall as quickly as they had in inaugurations past.”

The Secret Service says that this was the first time security fencing was installed around the National Mall for an inauguration. To get onto the Mall, people were required to go through one of seven checkpoints where their bags were checked, but there were no magnetometers used at those checkpoints.

A law enforcement official not authorized to publicly discuss the inauguration says officials were “not aware of any issues with flow rate in and around the National Mall.”

Spicer then said, “This was the largest audience to ever witness an inauguration — period — both in person and around the globe.”

He offered no evidence and there is no immediate way to confirm such a claim.

But photo taken during Barack Obama’s 2009 inauguration showed substantially more people on the Mall. It is not known how many people watched the ceremony on television around the globe. In the U.S., Nielsen estimates 31 million viewers watched TV coverage, but that’s less than Barack Obama’s and Ronald Reagan‘s first inaugurations.

The exact size of the crowd Friday may never be known. The National Park Service stopped providing estimates in the 1990s.

TRUMP: The president also went after a reporter who incorrectly wrote that the president had removed a bust of Martin Luther King Jr. from the Oval Office. The reporter later acknowledged the error, saying a Secret Service agent and a door had obstructed his view of the bust when reporters were allowed into the room briefly after Trump’s swearing in.

“But this is how dishonest the media is,” Trump said.

“Now, big story, the retraction was like, where?” he asked. “Was it a line or do they even bother running it?”

THE FACTS: Trump is right. The reporter for Time magazine made an error. The White House said Trump never removed the King bust from the Oval Office.

The error about the bust was first transmitted in a pool report distributed among reporters. The White House often uses a pool system when not all reporters who want to attend an event can be accommodated in a space.

At 7:30 p.m., reporter Zeke Miller wrote a pool report saying, “The MLK bust was no longer on display.”

Once Miller realized his error, an update was sent to the pool. “The MLK bust remains in the Oval Office, in addition to the Churchill bust, per a WH aide. It was apparently obscured by a door and an agent during the spray. Your pool offers sincerest apologies.”

Miller also corrected the error on Twitter, and Time magazine corrected its story based on his report.

Republish with permission of The Associated Press.