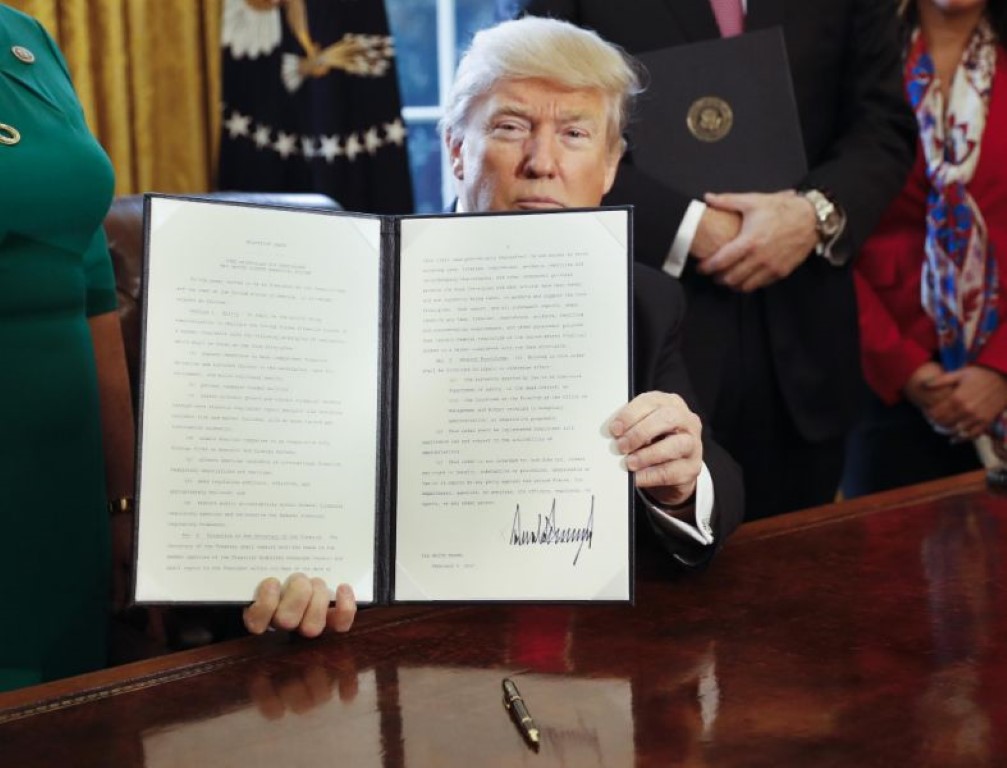 The Latest on President Donald Trump (all times local):

President Donald Trump has signed an executive order that will direct the Treasury secretary to review the 2010 Dodd-Frank financial overhaul.

Trump has called the law a “disaster” and said it failed to address some of the causes of the 2008-2009 financial crisis.

The president has also signed a presidential memorandum related to retirement planning. The administration’s move will delay implementing an Obama-era rule that requires financial professionals who charge commissions to put their clients’ best interests first when giving advice on retirement investments.

The Trump administration says it has thawed its temporary freeze on contract and grant approvals at the Environmental Protection Agency, with all $3.9 billion in planned spending moving forward.

A media blackout at the agency also appears to have been partially lifted, as a trickle of press releases were issued by EPA this week. However, the agency still has not posted to its official Twitter feed since President Donald Trump’s Jan. 20 inauguration.

The Associated Press and other media outlets reported last week that Trump political appointees had instructed EPA staff not to issue press releases or make posts to the agency’s official social media accounts without prior approval.

Contract and grant spending at the agency was also put on hold, prompting confusion and concern among state agencies expecting funding.

An international school in Bosnia announced Friday it would extend scholarships to students affected by Trump’s travel ban on citizens from seven Muslim-majority countries. The United World College’s branch in Mostar said it was motivated by its belief in equal opportunities.

In Portugal, the parliament there voted to condemn the U.S. travel ban and highlighted the role of the U.S. to promote tolerance and human rights.

In Sweden, Deputy Prime Minister Isabella Lovin posted on Facebook a photo of her signing the country’s new climate law while surrounded by seven female members of her staff. Swedish media say it resembles photos of Trump in the Oval office surrounded by male advisers.

Trump addressed last month’s job report, which showed the U.S. economy adding 227,000 jobs and the unemployment rate at 4.8 percent. The report also says that more Americans started looking for work, although not all of them found jobs immediately.

Trump is joining business leaders and CEOs in the White House and also previewing some of his economic priorities. He says he expects “to be cutting a lot out of Dodd-Frank,” the financial regulations put in place in response to the Great Recession.

The president says they’ll be discussing how to bring back jobs, lower taxes and reduce regulations.

President Donald Trump says that a “new radical Islamic terrorist” is behind an attack outside the Louvre Museum in Paris.

Trump tweeted early Friday that America needs to “get smart,” in light of the incident.

He writes, “a new radical Islamic terrorist has just attacked in Louvre Museum in Paris. Tourists were locked down. France on edge again.”

A knife-wielding man shouting “Allahu akbar” — “God is Great,” in Arabic — attacked French soldiers on patrol near the museum Friday in what officials described as a suspected terror attack.

The soldiers first tried to fight off the attacker and then opened fire, shooting him five times.

There were no immediate details about the identity of the suspect.

Turnbull told journalists that Trump had agreed to honor a deal to resettle refugees from among around 1,600 asylum seekers. Most are in island camps on the Pacific nations of Nauru and Papua New Guinea. Turnbull also said the U.S.-Australia relationship is strong.

Australia has refused to accept them and instead pays for them to be housed on the impoverished islands.

Trump earlier took to Twitter to call the agreement with Australia a “dumb deal.”

In an early morning Twitter post Friday, the president kept alive a theme he brought up a day earlier during his first appearance at the National Prayer Breakfast.

Trump, who once hosted the NBC reality TV show, took a pot shot there at Schwarzenegger, the current host and former California governor, over a ratings nosedive for the show.

On Friday, Trump said in his tweet, “Yes, Arnold Schwarzenegger did a really bad job as Governor of California and even worse on the Apprentice … but at least he tried hard!”

Schwarzenegger responded quickly to Thursday’s remarks in a video on his verified Twitter account, suggesting that he and Trump switch jobs.