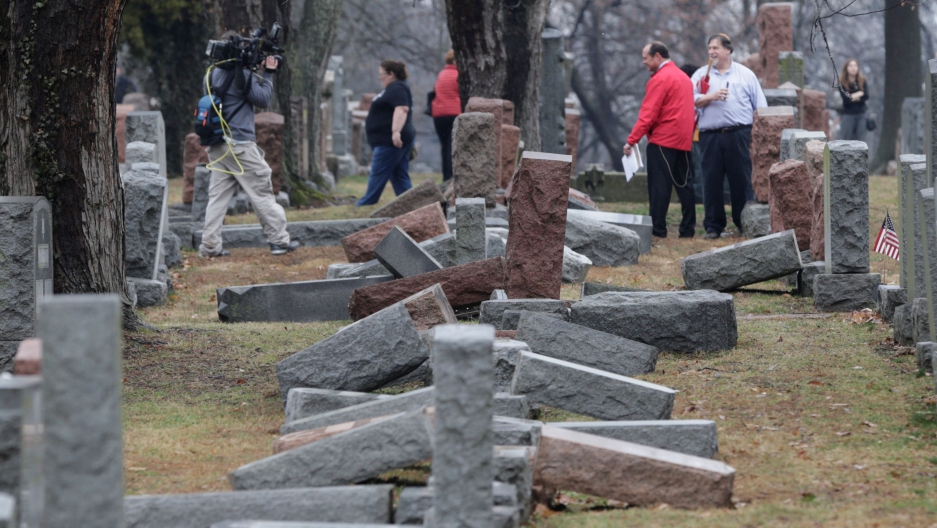 Acts of anti-Semitism are up radically this year. Since January 1, there has been an estimated 100 bomb threats against Jewish Community Centers around the nation, and last week 170 headstones were tipped at a Jewish cemetery in St. Louis and 100 more vandalized at a cemetery in Philadelphia.

On Thursday, the co-chairs of the congressional Bipartisan Task Force for Combating Anti-Semitism delivered a letter to President Trump calling on him to prepare and implement a comprehensive strategy to combat anti-Semitism.

“If 100 branches of any institution in this country – any religious site, any business, or God forbid any school – were targeted by bomb threats in such a short period, there should be public outcry and it should rise to the highest levels of concern,” said Boca Raton Democrat Ted Deutch said. “A threat to the Jewish community, or any religious community, is a threat to us all. When Jewish institutions and schools are targeted, and when terrorist chat rooms on the internet pick up on targeting Jews, we must take action. With my fellow Co-Chairs, we are asking the President for a more comprehensive federal response.”

Deutch and Miami Dade Republican Illeana Ros-Lehtinen are among the group of eight House members who co-chair the committee.

Among the proposals that they’re calling for include creating a national reporting center for abusive online dialogue and creating a mechanism led by the Attorney General to bring all relevant federal agencies to protect Jewish communities and prosecute the criminals.

See the text of the letter below:

As the Co-Chairs of the Bipartisan Task Force for Combating Anti-Semitism in the U.S. House of Representatives, we thank you for beginning your address to Congress this week by standing against anti-Semitism and condemning the recent threats against Jewish institutions. We stand ready to work with your Administration in combating anti-Semitism across our country and around the world. With this goal in mind, we write to urge you to operationalize your statement by taking key actions against anti-Semitism in our country. We believe that your Administration should prepare and implement a comprehensive, inter-agency strategy for detecting, investigating, prosecuting, and preventing crimes motivated by anti-Jewish bias while deterring future attacks against Jewish sites.

As you know, since January 1, there have been an estimated 100 bomb threats against Jewish Community Centers (“JCCs”) and Jewish schools in five waves at 81 locations in 33 states. We have also seen significant desecration of Jewish cemetery sites in the St. Louis and Philadelphia regions and other incidents of vandalism and harassment of Jews. These threats are unacceptable in our country.

We are pleased that the Federal Bureau of Investigation (FBI) is conducting an analysis of these threats and working with non-profit organizations to ensure that JCCs are properly briefed on security and reporting procedures in the event of an attack. We appreciate Attorney General Sessions’ commitment to investigating and prosecuting all instigators of these crimes targeted against Jewish communities.

As Members of Congress invested in the protection of Jewish communities and combating anti-Semitism at home and abroad, we respectfully encourage you to consider the following specific proposals to improve our government’s response to anti-Semitism:

1. Ensure that the Civil Rights Division of the Department of Justice has access to the necessary resources and information to fully investigate alleged anti-Semitic crimes and ensure the perpetrators are brought to justice.

The Department of Justice should encourage local law enforcement agencies to accurately and promptly report data. Some of these local agencies have historically under-reported or failed to report cases to federal counterparts.

2. Ensure that a mechanism exists to coordinate inter-agency detection of and response to new anti-Semitic crimes.

As anti-Semitic incidents increase in prevalence and complexity, there should be improved interagency coordination to detect and respond to new crimes. A coordination mechanism would help ensure all tools are utilized to protect Jewish communities and prosecute the criminals. Similar to the interagency task force you proposed for dismantling criminal cartels, this instrument, led by the Attorney General, could bring together the Departments of Justice – including the FBI – Homeland Security, Education, and State, and the Director of National Intelligence, to help synchronize governmental responses to anti-Semitic threats. Particularly with recent public reports that these threats may be originating overseas, we must engage all agencies responsible for our nation’s security from threats emanating at home and abroad. The range of participating agencies can also improve classification of and responses to attacks, and ensure Jewish communities are fully briefed and prepared to respond appropriately to threats and attacks.

Any policy must respect our Constitutionally-protected right to free speech with the need to address incitement to violence and targeted cyber-attacks on Jews. This could be accomplished by creating a central national reporting center for online abuse, or by directing the National Telecommunications and Information Administration to prepare a report on all online hate crimes, similar to the 1993 report “The Role of Telecommunications in Hate Crimes.”

We look forward to working closely with you on our shared goal of combating anti-Semitism and ensuring the safety and security of Jewish communities across our country. We would like to respectfully request a response highlighting your government-wide plan for addressing anti-Semitism and how Congress can help fill any existing gaps in the government’s authorities to respond effectively.