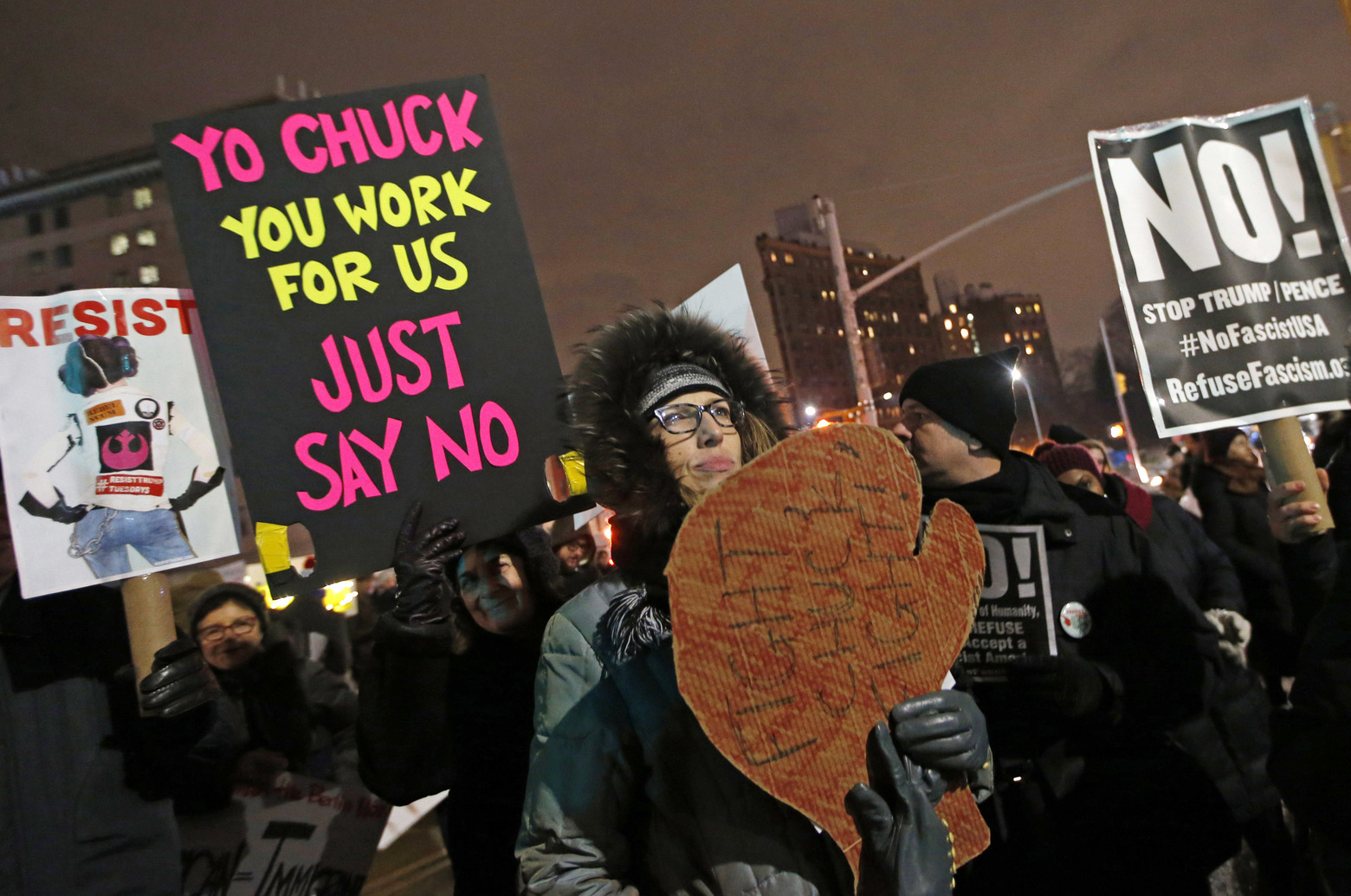 Their worry wasn’t the new president. It was his opposition.

Amid a national surge of anti-Trump protests, boycotts and actions, liberals have begun taking aim at a different target: Their own party.

Over the past few weeks, activists have formed a number of organizations threatening a primary challenge to Democratic lawmakers who offer anything less than complete resistance to the Republican president.

“We’re not interested in unity,” said Cenk Uygur, the founder of Justice Democrats, a new organization that’s pledged to replace “every establishment politician” in Congress. “We can’t beat the Republicans unless we have good, honest, uncorrupted candidates.”

While party leaders have urged Democrats to keep their attacks focused on Trump, the liberal grass roots sees the fresh wave of opposition energy as an opportunity to push their party to the left and wrest power from longtime party stalwarts.

The intraparty pressure is reminiscent of the tea party movement, where conservative activists defeated several centrist Republican incumbents. Their efforts reverberated through the 2012 and 2016 presidential elections, forcing candidates to the right on economic issues.

Like Uygur, many founders of the new groups are supporters of Sen. Bernie Sanders‘ presidential campaign, eager to continue their effort to remake the Democratic Party.

Democratic officials from more conservative states worry that those primary contests will result in the party holding even less power in Washington.

Sen. Joe Manchin, a West Virginia Democrat likely to face a tough re-election fight in a state won overwhelmingly by Trump, said the effort will make Democrats a “super minority” in the Senate.

A coalition named “WeWillReplaceYou” is urging Senate Democratic leader Chuck Schumer of New York to remove Manchin from his new role in the party leadership after Manchin expressed openness to working with Trump.

“If you want to go ahead and beat me up in a primary then go ahead,” Manchin said. “All it does is take the resources from the general.”

Even without primaries, the party faces a challenging political map in 2018. Republicans will be defending just eight Senate seats, while Democrats must hold 23 — plus two filled by independents who caucus with them. Ten of those races are in states Trump carried November.

The activists say they’re willing to trade power for conviction.

They point to a postelection shift among Democrats as a sign that their efforts are working.

Initially, Schumer and even liberals such as Sanders and Massachusetts Sen. Elizabeth Warren cautiously spoke of working with Trump on certain issues. After the wave of liberal fury, most Democrats have shifted into full opposition mode.

“Democrats have a reflexive instinct to compromise,” said Ben Wikler of MoveOn.org, which has directed its members to protest at Democratic as well as Republican congressional offices. “At this moment of successive Trump crises, resistance rather than compromise is what the country needs.”

Democratic leaders say the path to victory next year depends on a strong economic message, one that casts Trump as betraying the working-class voters who boosted him to victory.

“What we have in common, whether you’re West Virginia or Massachusetts or Kansas is a commitment to economic opportunity,” said Tom Perez, the newly elected Democratic National Committee chairman.

A memo this past week from Priorities USA gave Democrats a “10-point checklist” for criticizing Trump’s economic policies and conflicts of interest, saying the party cannot simply count on the president to remain “his own worst enemy.”

Many of the most vulnerable Democratic senators avoided town halls meetings during the congressional recess last week, hoping to evade politically damaging confrontations.

In the weeks after Election Day, the Ohio Democratic Party held a series of meetings across the state with new activists. Since then, they’ve teamed up with some organizations for events.

“Our goal is to build good relationships so that come spring, summer of ’18 everyone moves to an election mindset,” said David Pepper, the state party chairman.

That may be a hard sell for some of the new anti-Trump organizations.

“Something the tea party was really smart about early on was not giving a big bear hug to the Republican National Committee,” said Ezra Levin, the executive director of the new anti-Trump group Indivisible. “Keeping the political parties at arm’s length is crucial to remaining an outside political force.”