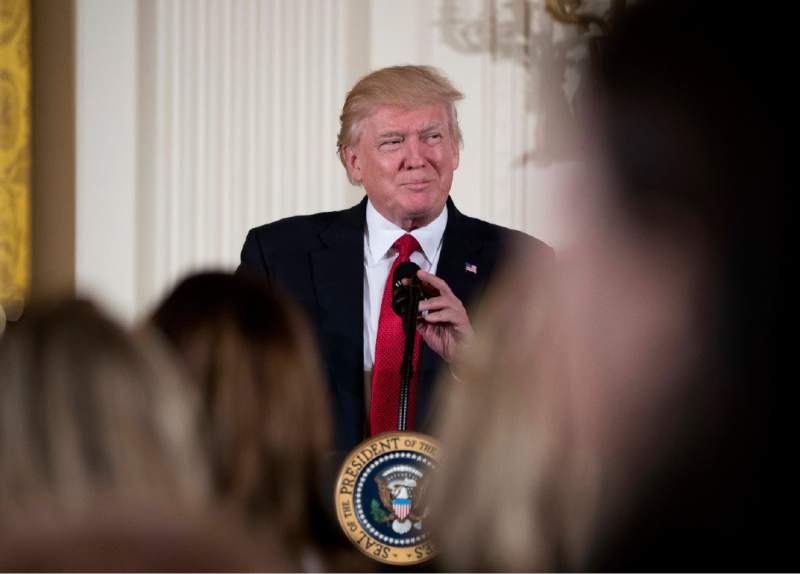 Most Americans disapprove of Donald Trump‘s overall performance two months into his presidency. But they’re more upbeat about at least one critical area: his handling of the economy.

Nearly 6 in 10 Americans disapprove of Trump’s overall performance, and about the same percentage say the country is headed in the wrong direction, according to a new poll by the Associated Press-NORC Center for Public Affairs Research. It was conducted amid the collapse of the GOP’s health care overhaul.

But the poll also found a brighter spot for the businessman-politician on the economy, often a major driver of presidential success or failure. There, Americans split about evenly, with 50 percent approving and 48 percent disapproving of Trump’s efforts.

“He’s driving the car off the cliff in every other kind of policy and executive action he’s trying to push through, but (not) the economy,” said Ryan Mills, a 27-year-old tobacco company chemist from Greensboro, North Carolina.

Overall, just 42 percent of Americans approve and 58 percent disapprove of the job Trump is doing as president. That’s an unusually poor rating by historical standards for a still-young administration.

By contrast, at this point in their presidencies, Barack Obama‘s approval rating was above 60 percent in Gallup polling and George W. Bush‘s was above 50 percent. Gallup’s own measure of Trump’s approval has dipped below 40 percent.

Trump has suffered defeats in the federal courts, which twice temporarily halted his travel ban on some foreigners, and in Congress, where discord among Republicans has stymied legislation to up-end Obama’s signature health care law. The FBI, along with Congress, is probing Russia’s meddling in the 2016 election and any possible coordination with the Trump campaign.

The president has responded in public with belligerent tweets often blaming the media, Democrats, conservative Republicans and others.

The AP-NORC poll did show Republicans still far more likely to approve than disapprove of Trump, a fifth of GOP respondents said they don’t approve of his performance. Among independents, six in 10 disapprove.

Notably, whites — who formed an important chunk of Trump’s political base during the election — divide about evenly on the approval question, 53 percent approving and 47 percent disapproving.

But there are signs in the poll that Trump’s base is holding and that people are willing to give him a chance on the still-strong economy.

Fifty-eight percent of whites without a college degree — who were especially likely to vote for Trump — approve of the job he’s doing overall.

The current majority extends across party lines, with 63 percent of Republicans, 54 percent of independents and 53 percent of Democrats describing the national economy as good.

Trump voter Joshlyn Smith, a Riverside County, California, law enforcement officer, said the president needs to move past “the Twitter stuff” that often mires him in social media spats — and focus instead on the nation’s policy.

“I feel like I want to give him a fair shot, especially in terms of helping on taxes and the economy,” said Smith, 38. “On a personal level, I think he’s too involved with how he’s portrayed in the media. I want him to have a little bit tougher skin.”

The approval ratings of many presidents through history are linked to the economy, with several — including Harry Truman, Jimmy Carter, Ronald Reagan and Barack Obama — suffering politically for downturns during their first year in the White House, according to a project by the Miller Center at The University of Virginia.

Trump inherited a strong economy, which might be leading people to give him a chance to maintain it, said Barbara Perry, director of presidential studies at the Miller Center.

“It starts with how they’re feeling about their pocketbooks and their family budget,” Perry said. For presidents, “if you can keep the economy going well and having people feel good about (it), good about their lives and therefore good about the country, that can cover a multitude of sins.”

The poll, conducted over five days preceding and following last Friday’s collapse of the GOP health care bill, suggests the political damage could be hard for Trump to leave behind even if the economy stays strong.

It was a galling setback for the president and the Republicans who control Congress. Speaker Paul Ryan of Wisconsin canceled a House vote that would have spelled defeat for the legislation because too many Republicans opposed it.

— More than 6 in 10 Americans disapprove of Trump’s handling of health care, the worst of seven issues tested in the poll. Three in 10 Republicans feel that way, as do 6 in 10 independents and 90 percent of Democrats.

— Eighty-six percent call health care a very or extremely important issue to them personally, nearly as many as the 87 percent who say the same about the economy.

— Along with health care, majorities of Americans also disapprove of Trump’s handling of foreign policy, immigration, the budget deficit and taxes. Half approve of how he is handling Supreme Court appointments.

The AP-NORC poll of 1,110 adults was conducted March 23-27 using a sample drawn from NORC’s probability-based AmeriSpeak panel, which is designed to be representative of the U.S. population. The margin of sampling error for all respondents is plus or minus 4.0 percentage points.

Interviews were conducted online and using landlines and cellphones.