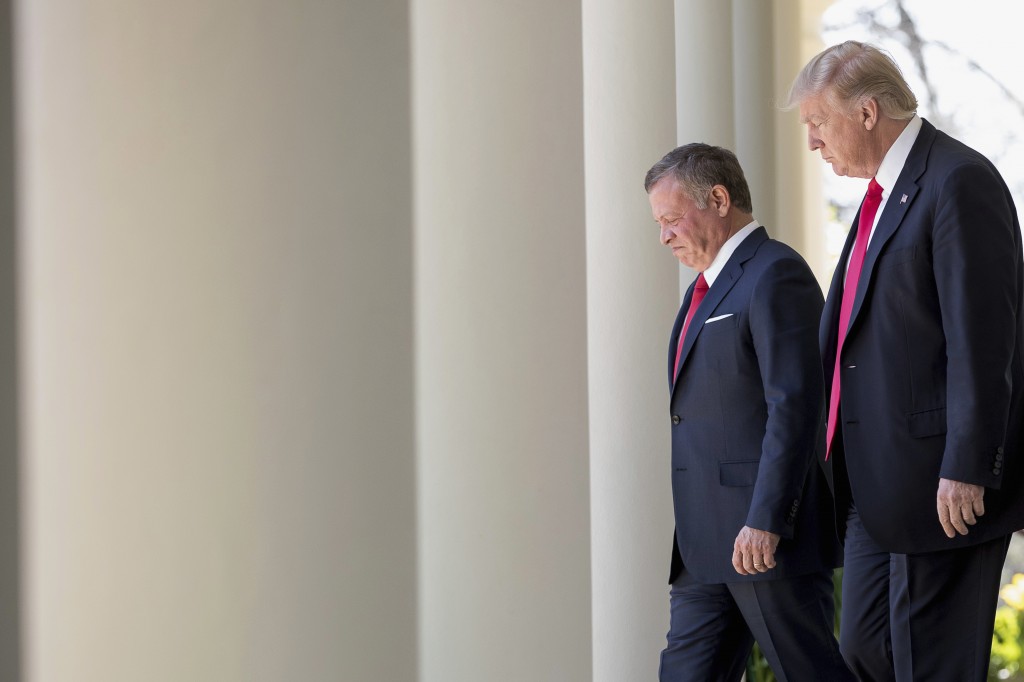 For Donald Trump, the reality of the world’s problems may be starting to sink in.

Standing in the sunny White House Rose Garden, the president said Wednesday that the gruesome chemical weapons attack in Syria had changed his views on the quagmire of a conflict that he’d previously indicated he wanted to steer clear of. He mourned the deaths of the youngest victims — “innocent children, innocent babies” — and said brutality had “crossed a lot of lines for me.”

“It is now my responsibility,” he declared.

The president’s words were far from a declaration that he intends to act, and he notably avoided discussing what retaliatory options he would be willing to consider. Ultimately, his rhetoric may well land among the litany of harsh condemnations of Syrian President Bashar Assad by Barack Obama and other world leaders that did little to quell the six-year civil war.

Yet Trump’s willingness to accept that he now bears some responsibility for a far-away conflict marked a significant moment for an “America First” president who has vowed to focus narrowly on U.S. interests. His comments also suggested a growing awareness that an American president — even an unconventional one like him — is looked to as defender of human rights and a barometer of when nations have violated international norms.

The bloodshed in Syria is just one of the intractable international problems piling up around Trump. North Korea appears intent on building up its nuclear program, despite vague threats from his administration. The Islamic State group is still wreaking havoc in Iraq and Syria, while a Pentagon review of U.S. strategy sits on his desk.

Trump conceded Wednesday that of all the world’s problems, the Middle East is one area he would rather avoid. His decision to at least rhetorically take a measure of responsibility was all the more striking given his frequent shoveling of blame for problems big and small onto anyone but himself.

In public, he faults Obama for leaving him “a mess” and says his campaign opponent Hillary Clinton is behind the flood of revelations possibly linking his campaign to Russia. In private, he berates his staff for failing to fix the self-made crises that have battered the White House, including his pair of travel bans blocked by the courts and the failure to pass health care legislation.

Trump initially took the same blame-shifting approach in addressing the deadly attack in Syria. In a short written statement Tuesday, he said the carnage was “a consequence of the past administration’s weakness and irresolution.”

In 2013, Obama pulled back from planned airstrikes against Syria following a chemical weapons attack, despite having declared that the deployment of deadly gases would cross a “red line” for him. Obama’s decision was widely criticized in the U.S. and by Middle Eastern allies, and undermined later attempts to compel Assad to leave office.

“The regrettable failure to take military action in 2013 to prevent Assad’s use of chemical weapons remains a blight on the Western world,” said Sen. Bob Corker, R-Tenn., the chairman of the Senate Foreign Relations Committee.

Still, foreign policy officials within the Trump administration were irritated by the president’s eagerness to focus on his predecessor in his first reaction. Some wanted him to focus more on condemning Assad and highlighting U.S. resolve.

Their objections did little to sway the president at the time. But just a day later, Trump appeared more willing to embrace the gravity of the situation and his new role in it.

His posture may well have been impacted by the fact that his remarks in the Rose Garden came after meeting with Jordan’s King Abdullah, whose country has borne the brunt of the refugee crisis spurred by the Syrian war. Jordan is among Washington’s most important partners in the region and is significantly dependent on the United States.

Abdullah, who worked closely with Obama, enthusiastically embraced Trump’s condemnation of the chemical weapons attack. During a joint news conference, he said to Trump, “I believe under your leadership we will be able to unravel this very complicated situation.”

Eliot Cohen, a Trump critic who served in the State Department under President George W. Bush, said that whether Trump intended to or not, he now has put himself in the same position as Obama, raising the stakes for action in Syria, perhaps without having thought out whether he plans to follow through.

“The deep irony here is you may see a lot of the same failures that the Obama administration had except delivered with a different style,” Cohen said.

previousJoe Henderson: Lawmakers seizing chance to expand gun use under cover of "Stand Your Ground"