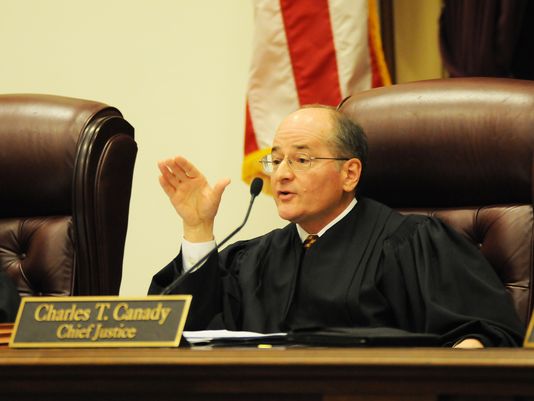 According to Sen. Charles Grassley, the U.S. Supreme Court may need to fill another opening this summer. The Iowa Republican, Chairman of the Senate Judiciary Committee, did not name names, but rumors are swirling it could be the Court’s swing vote, 80-year-old Anthony Kennedy.

If those rumors are true, will those three again go to the top? How about some of the others? Also on the Trump list are Florida Supreme Court Justice Charles Canady and Judge Federico Moreno from the Southern District of Florida.

The next nominee will be an appeals court judge or a state supreme court justice. Moreno and Utah Republican Senator Mike Lee are the only two not fitting that description. Moreno’s logical next step is a promotion to the court of appeals.

Will Canady receive serious consideration this time? He has similar educational training to the current Court.

All 9 current justices studied law at either Harvard or Yale (Ruth Bader Ginsburg started at Harvard, but earned her law degree from Columbia). Canady received his degree from Yale, while Pryor came from Tulane, Sykes from Marquette, and Hardiman from Georgetown. Gorsuch attended Harvard and Oxford.

As a former state legislator, four-term Congressman and General Counsel for Gov. Jeb Bush, Canady understands the separation of powers between the three branches of government. He was Chief Justice from 2010-2012 and along with Ricky Polston, comprise the Court’s reliable conservative minority.

If Gov. Rick Scott wanted to bend Trump’s ear about Canady, the President would certainly listen. There is no question Scott and Trump are of like minds on many topics in addition to jobs. Another Trump friend, Attorney General Pam Bondi, could do the same.

On the downside, Canady will be 63 years old in June. Next to Moreno (64) and Michigan Supreme Court Chief Justice Robert Young, who is 65, Canady is the oldest on the list.

Pryor is 55, Sykes 58 and Hardiman is 52. The thought of having someone on the bench for 30 years is an appealing quality for a sitting president.

Confirmation hearings would certainly be lively. Millennials will not likely recall the impeachment of President Bill Clinton, but Canady was one of the House prosecutors. Would Democrats have fun with that?

How about being questioned by Judiciary Committee member Lindsey Graham? The South Carolina Republican was also one of the impeachment prosecutors (known as House Managers).

How juicy would it be for Canady to be tapped and for Charlie Crist to receive some credit for raising Canady’s profile? It was then-Governor Crist who appointed Canady to the Florida Supreme Court.

Perhaps Canady wound up on Trump’s list as a favor to Scott, or the president will actually give him a serious look. No one has retired yet, but that doesn’t stop playing the “what ifs” game in the meantime.

Bob Sparks is a former political consultant who previously served as spokesman for the Republican Party of Florida, Department of Environmental Protection and the Florida Attorney General. He was a senior adviser to former Gov. Charlie Crist. Before entering politics, he spent nearly two decades in professional baseball administration. He can be reached at rjsparks24@gmail.com and Twitter @BobSparksFL.

nextGov. Scott delays trip to Argentina due to wildfires