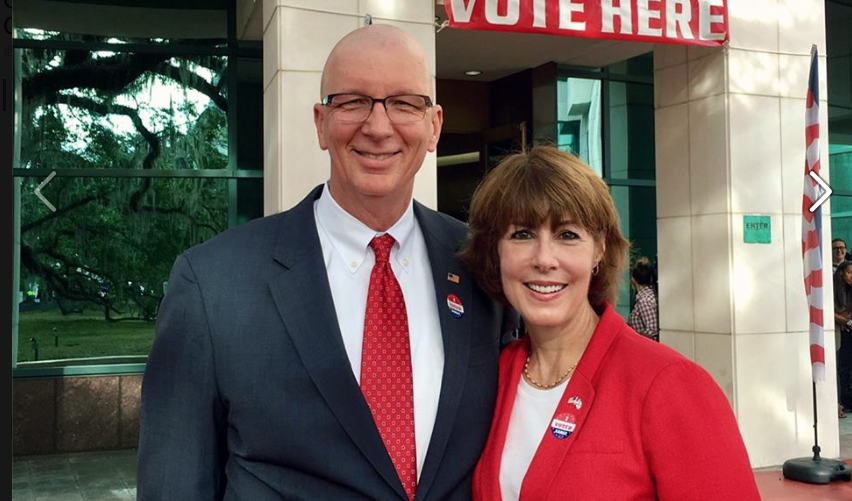 One thing distinguishes Gwen Graham from other candidates (and possible candidates) for Governor — she is a hugger.

Prepare to be hugged, Florida.

Graham, 54, the one-term former Democratic congresswoman from Tallahassee, has little professional political experience, having run for only one election. She won that one by barely a percentage point, taking Florida’s 2nd Congressional District away from Republican U.S. Rep. Steve Southerland, only to give it up when redistricting painted her district red.

Now Graham is entering a race that already has two major Democratic candidates, Tallahassee Mayor Andrew Gillum and Winter Park businessman Chris King, and appears wide-open for more, all seeking a shot at something her party hasn’t won in nearly a generation, the governor’s office.

Yet Graham is a woman who grew up in politics, daughter of legendary Democrat Bob Graham who served as governor when she was in junior high and high school, and as U.S. Senator through much of her adulthood.

It’s as close to Florida gets to a Democratic royal family: Her grandfather was a state senator; her uncle, publisher of The Washington Post. The Grahams have been established in South Florida for generations, though she has spent most of her life in Tallahassee.

From her father, she shares moderate positions on many economic issues and her deeply-held liberal viewpoints on Florida’s environment and justice, and a strong alliance with organized labor.

The National Journal rated her the most independent member of the Florida delegation.

Her voting record in Congress showed that mix of moderate economic and foreign affairs politics. And she cast some votes progressive Democrats hold against her, supporting new leadership against U.S. House Speaker. Nancy Pelosi, and for the Keystone XL Pipeline, keeping the military prison open at Guantánamo Bay, and for an attempt to suspend debt relief to Iran.

But on other issues such as her efforts to help restore Apalachicola Bay and the Everglades, to support veterans seeking jobs, women’s rights, children’s issues, she’s been reliable for Democrats.

Consequently, only a handful of the strongest right-wing or left-wing groups scored her exceptionally well or horribly bad on their respective political agendas, while others often crossed over to give her at least a little, but restrained love.

The U.S. Chamber of Commerce, typically reserving high marks for Republicans, scored her a 75, as did the Associated General Contractors of America. She received only a 39 from progressive Common Cause and just 64 from the American Civil Liberties Union.

Nevertheless, Defenders of Wildlife gave her an 83; the Human Rights Campaign, 100; Club For Growth, 7; and Freedom Works 16.

One issue she’s carved out clearly is support for women and women’s health. Planned Parenthood gave her 100, while National Right to Life, a 0. And last time she ran, Emily’s List backed her.

Gwen Graham also has inherited much of her father’s image and connections and is someone able to bring in a Bill Clinton or a Joe Biden to campaign for her, and able to attract some of the top mainstream Democratic political operatives to work with her.

While in office, she also picked up on her father’s “workday” events, regularly spending a day working someone else’s job in Florida, in a hotel, a textile factory and elsewhere.

But while her father’s calling card was his handshake, Gwen Graham’s is the hug. A self-professed serial hugger, Graham fashions a matronly image to governing.

Graham is twice-married, currently to Steve Hurm, general counsel to the Leon County Sheriff’s Office. She has three young-adult children, Sarah, Graham, and Mark, from her previous marriage, and spent several years as a stay-at-home mother before going to work at Leon County Public Schools as a chief labor negotiator. Previously she had briefly practiced law in both Tallahassee and Washington D.C.

Hurm, a career law enforcement officer, has been battling Stage 4 prostate cancer, and Graham, who first declared a strong interest in running for governor last summer, put off a final decision until he was able to progress through treatment.