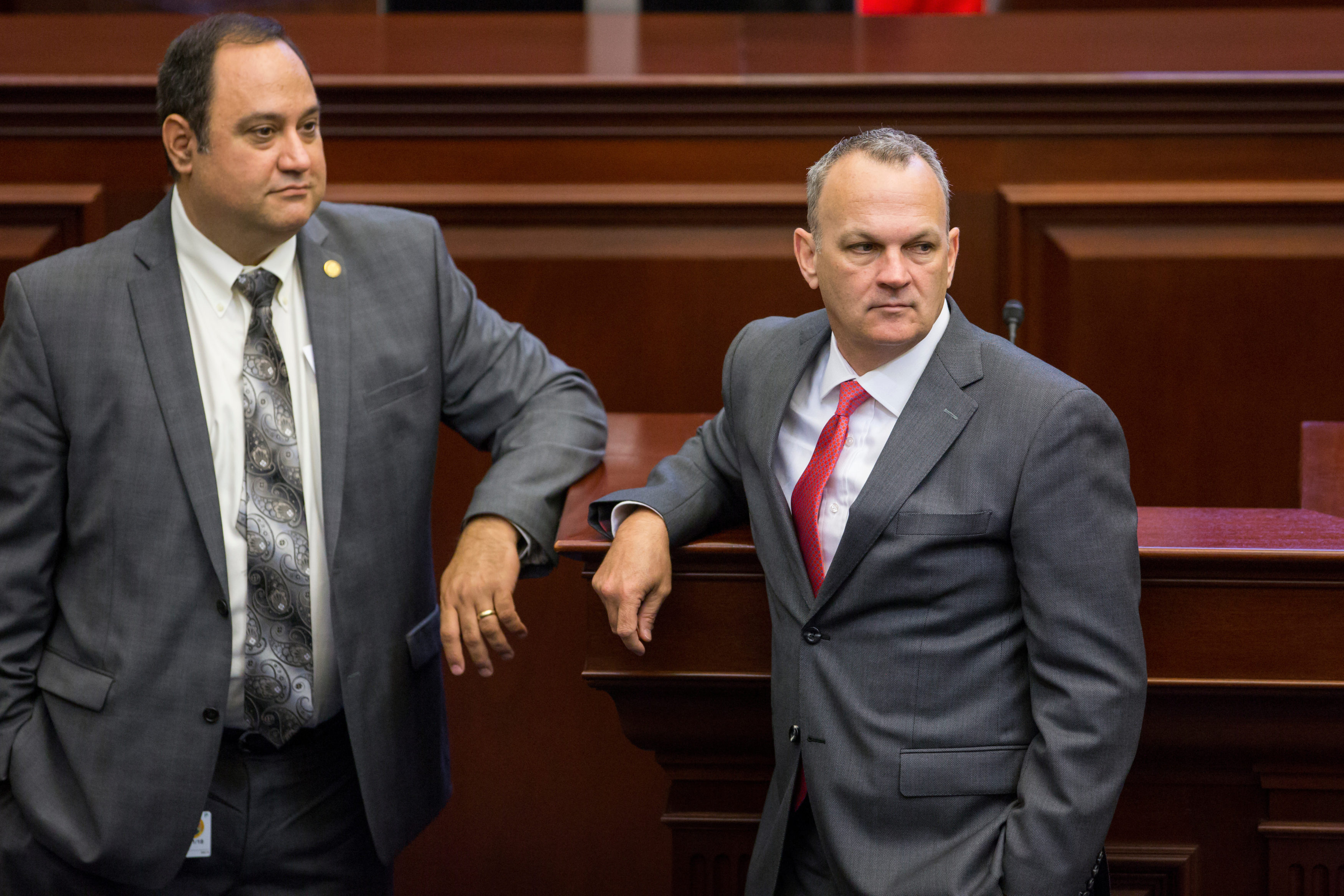 The Senate approved a roughly $83 billion state spending plan during a legislative overtime Monday, including a raft of conforming bills implementing House and Senate priorities on matters including public schools, colleges, and universities.

The 34-4 vote sent the General Appropriations Act to the House, which later approved it on a 98-14 vote. The annual ‘sine die’ ceremony, with the sergeants-at-arms for both chambers dropping handkerchiefs simultaneously, happened at 8:52 p.m.

The budget now heads to Gov. Rick Scott, who was at a “Freedom Rally for Venezuela” in Miami Monday night and did not attend the hanky-drop ceremony as he has in previous years.

It remains whether Scott will veto some or all the budget, which guts his favored tourism marketing and business incentive programs. His office did not issue a statement late Monday.

The budget gives $25 million — down from around $75 million — in recurring operating funds for VISIT FLORIDA, the state’s tourism marketing arm, and only $16 million to Enterprise Florida, the economic development organization.

The sine die ceremony was more subdued than earlier years, with far less than the usual complement of lobbyists and staffers hoisting red cups to toast the end of another Legislative Session.

The final Senate vote came at about 8:30 p.m. without debate, following a day spent in extensive debate over the budget package. The chamber sent the usual implementing bill over by the same margin, then paused to give the House time to act.

House Democrats debated the budget only briefly before Speaker Richard Corcoran dimmed the lights in the chamber, joking “We don’t want you to see the (budget) so we’re gonna vote on it blindly.” He actually was getting ready to show a House-produced video.

Corcoran, who is rumored to be eyeing the Governor’s Office in 2018, called the session’s work “bold and transformative,” mentioning the nearly 100 votes the budget got in the House.

With the Senate’s vote, “that’s way more than two-thirds,” he said — the margin needed to override the governor’s veto legislatively. “I think it’s more likely that (Scott) will veto (member) projects, and I have always told you that my encouragement to the governor is, ‘ go ahead and veto all the pork you can.’ “

Senate President Joe Negron also told reporters that policies in the budget “are things that this governor supports … I think that all of us will spend some time over the next week to 10 days to make our case. We have the burden of proof.”

House Democratic Leader Janet Cruz, however, said she didn’t “feel all the transparency that people professed” — a shot at Corcoran.

“We sat outside,” she said, referring to House Democrats in the budget process. “If Floridians who elected us really understood what was happening here, they would quite frankly be surprised at how few people make the decisions.”

Appropriations Chair Jack Latvala, a Clearwater Republican, warned earlier in the day that failure to adopt any of those bills could sink the entire budget.

“From a real-life perspective, if we fail to adopt one of the priorities of the other House, that’s going to have an impact on the whole process, and probably the budget as a whole. You know that as well as I do,” he said.

Nevertheless, there were bipartisan protests by senators who warned of the potential to sink bad policy into these must-pass bills without scrutiny by substantive committees.

“It’s easy for us to say, well, there’s good policy in here, and so that’s why we should do it,” Democrat Jeff Clemens argued. “Well, sometimes there’s bad policy in conforming bills, and we don’t get a chance to amend that here. All we can do is vote yes or no.”

There were protests about trade-offs. Sen. Bill Montford asked a series of questions about language providing defined contribution retirement plans to state workers, which the Senate agreed to in exchange for state workers raises.

“If we want the pay raise … we had to bite the insurance and the pension changes,” Latvala finally told Montford. “If you don’t think they’re worth the pay raise, vote against the bill.”

Thirteen senators took that advice, against 24 who voted for that conforming bill.

The budget act and conforming bills contain the first across-the-board salary increase for state workers in 11 years — with the biggest increase for people paid $40,000 per year and less. It would steer extra money to corrections officers and other positions plagued by high turnover.

The budget for PreK-12 would grow by $241 million but, because Florida will have 24,000 more students, the base per-student allocation would actually shrink by $27. But there’s $140 million for a Schools of Hope program, to lure charter schools to replace failing public schools, and $234 million for the Best and Brightest bonuses.

In companion legislation, the Legislature would require state universities to charge students per semester, so they could load up on courses and perhaps graduate sooner. There would be no tuition increases, but there would be increases in aid and scholarships.

Support foundations would open more of their books to public scrutiny. State colleges would get a new governing structure and limits on upper-level enrollment.

The state would spend $3.6 billion for agriculture and environmental programs. Some $13.3 million are for beach recovery and $39.9 million for beach projects, on top of the $10 million base budget. But the offer zeroed out funding for land acquisition under the Florida Forever program — sacrificed for a $1.2 billion rainy day fund.

“There’s nobody in this chamber that regrets that more than I do,” Latvala said. “But when you put that up against all that we did for the environment … we’ve had quite a year.”

The budget would allow the state to get cracking on Negron’s $1.5 billion Lake Okeechobee plan, designed to stop discharges of toxic algae-infused overflow into streams and estuaries to the east and west by storing 78 billion gallons of water in a reservoir to the south, with treatment and ultimate discharge into the Everglades and Florida Bay.

Total spending on the Everglades next year would total $274 million.

Plans for substantial cuts to hospitals were mitigated by a Trump administration offer of as much as $1.5 billion for charity care — although the conditions on that aid would restrict the amount to about $1 billion, according to Anitere Flores, who chairs the relevant Appropriations subcommittee.

The legislation would allow the county clerks of the courts to keep $10.4 million in court fees they otherwise would send to the Legislature, plus another $11.7 million from the state for jury-related costs.

That deal almost hit a snag when the House added two last-minute amendments. Senate bill manager Kelli Stargel wasn’t having it. She urged senators to say “No” to the House.

“It’s not about the policy. It’s about at the last minute of the last hour of the last day of what has been a very difficult session that we do an amendment that we were not prepared to do,” Stargel said.

The House accepted the trimmed version.