Florida leaders react to the bombing at a concert in Manchester 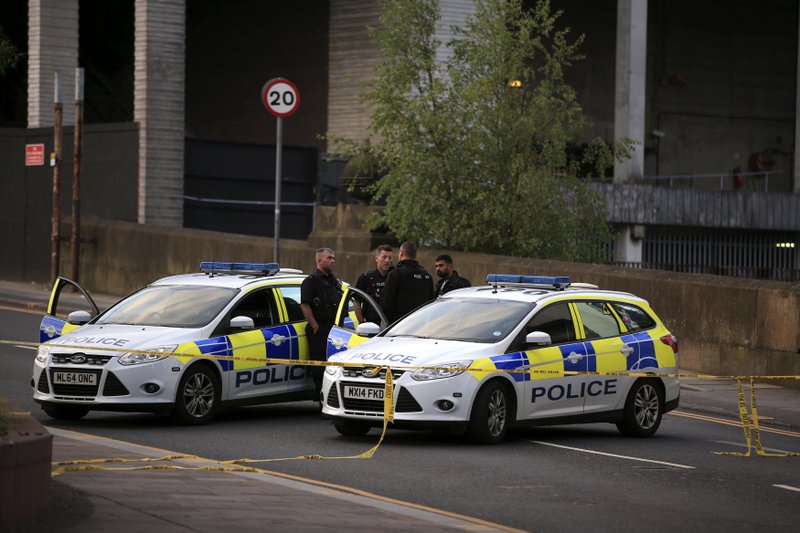 Police officers stand next to their vehicles near the Manchester Arena after a blast at Ariana Grande concert Tuesday May 23, 2017. An explosion struck the concert attended by thousands of young music fans in northern England, killing more than a dozen of people and injuring dozens in what police said Tuesday was being treated as a terrorist attack. (Peter Byrne/PA via AP)

The Islamic State group claimed responsibility Tuesday for the suicide bombing at an Ariana Grande concert in Manchester that left 22 people dead and sparked a stampede of young concertgoers.

The attack was the deadliest in Britain since four suicide bombers killed 52 London commuters on subway trains and a bus in July 2005.

Here is a compilation of reaction from Florida’s elected officials and leaders about the tragedy:

— Sen. Marco Rubio on Twitter: “Our prayers are with the people of Manchester.”

— U.S. Rep. Charlie Crist on Twitter: “My thoughts and prayers are with Britain and the families impacted by this horrific act in Manchester.”

— U.S. Rep. Carlos Curbelo on Twitter: “Praying for the people of Manchester.”

— U.S. Rep. Val Demings on Twitter : “Standing with and praying for Manchester today.  Another cowardly attack against innocent people.”

— U.S. Rep. Ted Deutch on Twitter: “Tonight in #Manchester, enormous amounts of horror, grief, and pain. From America and beyond, we join you in sympathy, outrage and resolve.”

— U.S. Rep. Neal Dunn on Facebook: “Leah and I send our sincere condolences to the British people as they respond to another heinous act of terrorism. The events in Manchester remind us again that these vicious killers will consider any target, even a crowd of teenagers and children at a music concert. We stand with resolve alongside our British friends in the face of this threat.”

— U.S. Rep. Alcee Hastings: “I offer my deepest sympathies to the families of the victims of yesterday’s terror attack in Manchester. As England’s law enforcement continues working to establish the full details of this horrific attack against innocent children and families, the American people stand side-by-side in grief, anger, and resolve. My thoughts and prayers continue to be with the city of Manchester and all of England as they come to terms with this terrible atrocity.”

— U.S. Rep. Al Lawson on Twitter: “Our thoughts and prayers are with #Manchester and the United Kingdom for all the victims of tonight’s attack. Such sad news.”

— U.S. Rep. Debbie Wasserman Schultz: “As I am writing yet another statement expressing horror and condolences after another inexplicable terror attack, I feel the angst and anger of a mother who has sent my children off to a concert just like last night’s in Manchester.

The terror attack that apparently targeted innocent young people was a truly despicable act committed by cowards. As Americans, we are heartbroken and horrified by this mass murder of young adults and even children, but make no mistake: our resolve to make our world a safer one for our children is only strengthened, and our commitment to working with our British ally in pursuit of that goal remains unshakeable.

Our thoughts are now with the victims, their families and all the people of Manchester. And while many facts are still unknown, Americans will not waver in seeking justice and standing up against the hate that motivates such heinous crimes. And we will never let these pretenders who hold themselves out as the only true defenders of Islam to be recognized as anything more than what they are: murderers.”

— Gov. Rick Scott on Twitter: “Praying for everyone in Manchester tonight. This is an absolute tragedy and our hearts are with those who were harmed and their loved ones. Also praying for the safety and security of Manchester of law enforcement and first responders during this unimaginably challenging time.”

On Tuesday morning, the governor tweeted: “(First Lady Ann Scott) and I continue to pray for the 22 innocent lives lost in the senseless act of hate and terror in Manchester last night. Florida stands with the British people.”

— Lt. Gov. Carlos Lopez-Cantera on Twitter: “Horrible and senseless. We mourn those lost and pray for swift justice.”

— Agriculture Commissioner Adam Putnam on Twitter: “Terrorists who take the lives of innocent people are nothing but cowards & they must be brought to justice. My prayers to Manchester.”

— Democrat Gwen Graham on Twitter: “As a mom, my heart breaks. Praying for the children and families, parents and grandparents in Manchester.”

— House Speaker Richard Corcoran on Twitter: “My deepest sympathies and prayers for strength go out to the victims, parents, & families of the terror attack in the U.K.”

— Sen. Lizbeth Benacquisto on Twitter: “Prayers to our British friends this evening. What a horrible tragedy.”

— Sen. Debbie Mayfield on Twitter: “My heart goes out to those in Manchester, especially to the families and first responders. Our prayers are with you and the United States of America will always stand by you.”

— Rep. Chris Sprowls on Twitter: “Our hearts are with the families of those killed in #ManchesterArena last night. May we unite together to eliminate terror.”

— Tampa Mayor Bob Buckhorn on Twitter: “My prayers go out to those in Manchester, as a Father of 2 little girls, I can’t imagine what these families are going through.”

— State Attorney Melissa Nelson: “We’re all grieving for the victims and those affected by yesterday’s bombing in Manchester.