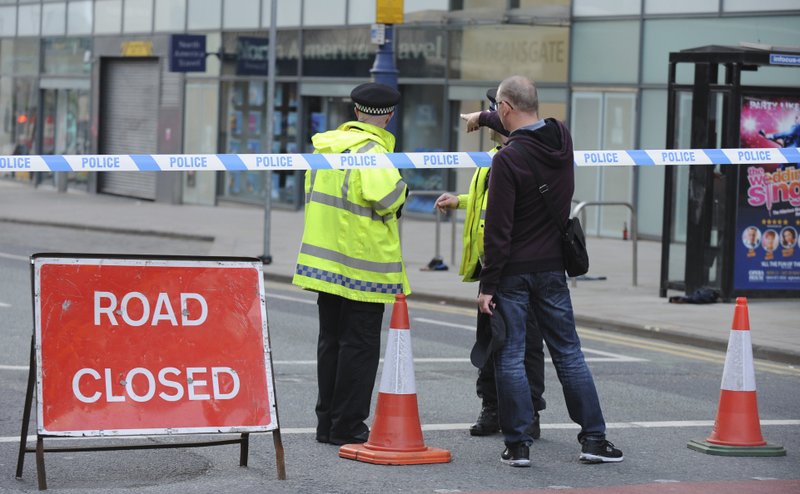 The Islamic State group claimed responsibility Tuesday for the suicide bombing at an Ariana Grande concert in Manchester that left 22 people dead and sparked a stampede of young concertgoers, some still wearing the American pop star’s trademark kitten ears and holding pink balloons.

Teenage screams filled Manchester Arena just after the explosion Monday night, and members of the audience tumbled over guardrails and each other to escape.

An 8-year-old girl was among the dead — the youngest known victim — and the child’s mother and sister were among 59 people wounded in what British Prime Minister Theresa May called “a callous terrorist attack.” The wounded included 12 children under 16.

“We struggle to comprehend the warped and twisted mind that sees a room packed with young children not as a scene to cherish but as an opportunity for carnage,” May said as campaigning for Britain’s June 8 national election was suspended.

May and police said the bomber died in the attack — something that went unmentioned in Islamic State’s claim of responsibility, which gave no name for the attacker. British police announced Tuesday they had arrested a 23-year-old man in connection with the bombing and raided two locations, carrying out a controlled explosion at one of them.

The attack was the deadliest in Britain since four suicide bombers killed 52 London commuters on subway trains and a bus in July 2005.

The attack sparked a nightlong search for loved-ones — parents for the children they had accompanied or had been waiting to pick up, and friends for each other after groups were scattered by the blast. Twitter and Facebook lit up with heartbreaking appeals for the missing.

Some concert-goers said security was haphazard before the show, with some people being searched and others allowed inside unhindered. The bombing took place at the end of the concert, when the audience was streaming toward the exits of Manchester Arena, one of the largest indoor concert venues in the world.

Witnesses said the blast scattered bolts and other bits of metal, indicating the bomb may have contained shrapnel intended to maximize injuries and deaths.

“There was this massive bang. And then everyone just went really quiet. And that’s when the screaming started,” said 25-year-old Ryan Molloy. “As we came outside to Victoria Station, there were just people all over the floor covered in blood. My partner was helping to try to stem the blood from this one person … they were pouring blood from their leg. It was just awful.”

Grande, who was not injured in the blast, tweeted hours later: “broken. from the bottom of my heart, i am so so sorry. i don’t have words.”

Hayley Lunt was staying at a hotel nearby and had taken her 10-year-old daughter Abigail to her first concert at Manchester Arena on Monday evening. She said the explosions rang out as soon as Grande left the stage.

“It was almost like they waited for her to go,” she said.

“We just ran as fast as we could to get away from that area,” Lunt said. “What should have been a superb evening is now just horrible.”

Police cars, bomb-disposal units and 60 ambulances raced to the scene as the scale of the carnage became clear.

“A huge bomb-like bang went off that hugely panicked everyone and we were all trying to flee the arena,” said 22-year-old concertgoer Majid Khan. “Everyone from the other side of the arena where the bang was heard from suddenly came running towards us as they were trying to exit.”

The city’s regional government and its mayor, Andy Burnham, were among scores of Twitter users who circulated the MissinginManchester hashtag, used by people looking for family members and friends.

The first confirmed victim was Georgina Callander, whose death was reported by her former school.

Bishop Rawstorne Church of England Academy in Croston, northwest of Manchester, posted a photo of Georgina on its website, smiling and looking smart in her school uniform. It described her as “a lovely young student who was very popular with her peers and the staff.”

Saffie Roussas, aged 8, was the youngest of the 22 victims identified so far. The head teacher of the Tarleton Community Primary School that she attended in the village of Tarleton, Lancashire, described Saffie as “simply a beautiful little girl in every aspect of the word. She was loved by everyone and her warmth and kindness will be remembered fondly. Saffie was quiet and unassuming with a creative flair.”

U.S. President Donald Trump, in Bethlehem, said the attack preyed upon children and described those responsible as “evil losers.”

“This wicked ideology must be obliterated. And I mean completely obliterated,” he added.

Islamic State’s claim of responsibility echoed others the group has made for attacks in the West, on an established communications channel but with vague details that leave room for an opportunistic attempt at propaganda.

The Dangerous Woman tour is the third concert tour by 23-year-old Grande and supports her album of the same name.

After Manchester, Grande was due to perform in London on Thursday and Friday, and later at venues in Europe, including Belgium, Poland, Germany, Switzerland and France, with concerts in Latin America and Asia to follow.

Pop concerts and nightclubs have been a terrorism target before. Most of the 130 dead in the November 2015 attacks in Paris were at the Bataclan concert hall, which gunman struck during a performance by Eagles of Death Metal.

In Turkey, 39 people died when a gunman attacked New Year’s revelers at the Reina nightclub in Istanbul.

Manchester, 160 miles (260 kilometers) northwest of London, was hit by a huge Irish Republican Army bomb in 1996 that leveled a swath of the city center. More than 200 people were injured, though no one was killed.

Reprinted with the permission of the Associated Press.