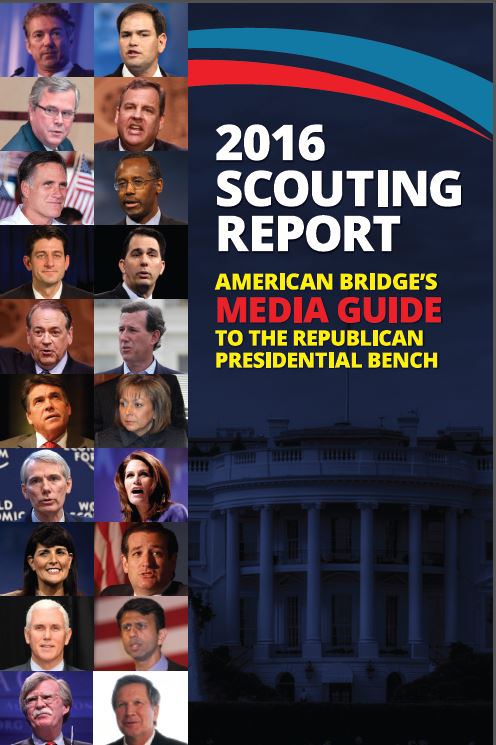 Opposition research generally involves a campaign gathering up as many facts as publicly (or privately) available on another candidate, preferably negative, in order to use against that candidate at an opportune time.

Describing itself as “The Most Comprehensive Early Look Ever at a Presidential Field,” the D.C.-based Democratic Party group American Bridge 21st Century has released their own oppo research paper for the masses on Monday. It includes anything even remotely embarrassing about a number of the Republicans who may enter the presidential sweepstakes next year.

Called the 2016 Scouting Report, the document includes key data points about the prospective contenders, such as Florida’s Jeb Bush and Marco Rubio—including an estimate of their wealth, a roundup of their stances on various issues and their career highlights—as well as a section on possible problems with their candidacy and “what to watch.

In the case of Rubio, here’s some information back when he was House Speaker in Florida:

One of the most nagging controversies from Rubio’s tenure as speaker stemmed from his decision to spend $2.5 million on renovations to his office and expanding his roster of staffers. This sum, more than $2 million higher than his predecessor spent, included staff salaries characterized as unusually high. Rubio’s chief of staff was hired with about three years of legislative experience and was paid more than his counterpart in the state senate who had more than 30 years of experience.

Rubio’s spending also funded the construction of a members-only dining room for state legislators. The construction drew significant criticism because a members-only facility was in contradiction to Florida’s sunshine laws encouraging legislative business to be conducted transparently and in the open. Rubio faced a litany of questions about the spending, and during one round of questioning responded by saying, “[The media are] treating me like O.J. or something.”

Also listed is the criticism that Tampa GOP political consultant Chris Ingram once made of Rubio – that he used a Republican Party of Florida credit card to make some home improvements:

In Rubio’s hands, the party’s card was used to charge more than $10,000 for his own family reunion. Rubio blamed his travel agent for the mistake and said that he repaid the charge. Rubio also used the card to charge more than $4,000 to pay for flooring renovations in his own home. He claimed he repaid this charge as well, but he has dodged direct questions about the incident.

Rubio also used the party credit card to pay for thousands of dollars of meals and car repairs,  as well as a haircut costing $134. In addition, Rubio faced criticism for double-billing the Republican Party of Florida and Florida taxpayers for plane tickets costing nearly $3,000.He again blamed his travel agency, but defended not personally paying for his wife’s tickets, calling her the “first lady of the Florida house.”

Though he repeatedly claimed to reimburse the party for his personal expenses, PolitiFact has rated his claim that the charges on the party’s credit card were made with “my money” as “Mostly False.”

Everyone in the national political press is waiting to hear if former Florida Governor Jeb Bush will make a run for the White House. But the American Bridge take on Jeb is pretty weak tea. For example, under the category of Disaster Relief Funds, we’re informed that Bush was criticized over disaster relief in the wake of Hurricane Wilma back in 2005, which like many if not most of the seven hurricanes that occurred in 2004-2005, left many Floridians without water, ice food or electricity. “Bush callously blamed Floridians stuck in hours-long lines for supplies for their fate, saying that they had “ample time” to prepare themselves for the disaster.”

Yeah, I can just see Rand Paul pulling that one out during one of the debates.

Other familiar categories include “Bush v. Gore” from the 2000 presidential election, and “Problems with the Base,’ where American Bridge reminds us that Bush’s stance on Common Core standards and immigration separates himself from many other conservatives. As if that isn’t mentioned in every newspaper story regarding the former governor’s potential candidacy.

How about some of the other national candidates?

This may be old news from New Jerseyites, but there’s some fun facts unearthed about Chris Christie (though many of these made New Yorker reporter Ryan Lizza’s profile of Christie earlier this year), none of them having to do with “Bridge-Gate.”

Under “Traffic Incidents,” there’s this:

Christie has a record of using his position as leverage, and as U.S. attorney, he avoided being ticketed and prosecuted to the full extent of the law in multiple traffic incidents.

In 2002, Christie drove the wrong way down a street and hit a motorcyclist. The officer who arrived on the scene declined to write Christie a ticket after Christie revealed his title and that he was on his way to a county prosecutor’s swearing-in ceremony. The victim, who was injured in the accident, sued Christie and the case was settled out of court in 2004.

In 2005, Christie was pulled over for speeding and for driving an unregistered and uninsured vehicle. He was issued tickets on which the officer wrote “no deal,” however Christie later talked with the prosecutor and, once again, his position as U.S. attorney came up and Christie was offered a reduced charge.

You may have heard how Christie has had trouble with the state’s economic performance, as well as issues with the state’s pension program. They’re all carefully laid out here. If the New Jersey Governor is serious about a run for the nomination (and all indications are that he is), he’ll have a lot of ‘splainin’ to do, and none of it has to be about his temperament or the so-called scandal that at one point earlier this year appeared to doom his chances.

Rand Paul is surely going to run next year, and his candidacy has turned on many members of the national media, since he’s gone out of his way to try to appeal to centrists and anti-war liberals. Some embarrassing details on Rand’s earlier pre-politician life (he’s only been in politics since 2010) have already been written about in GQ; But there is this interesting tidbit in the category under “Medical Career.”

Over the years, Paul has had issues with his medical board certification. He claimed to be a “board-certified” ophthalmologist, but the American Board of Medical Specialties, which “works with the American Medical Association to approve specialty boards,” reported that Paul was not certified. Paul was only certified, in fact, by a board that he created and led – the National Board of Ophthalmology, which was not recognized as legitimate. Paul’s National Ophthalmology Board “has been out of business since 2011,” and “does not under Kentucky law permit him to advertise as ‘board certified.’” Paul has avoided discussing why he felt comfortable claiming to be a “board-certified” ophthalmologist.

Louisiana Governor Bobby Jindal made an appearance on Fox News Sunday this weekend. He looks primed for a 2015-2016 run. Nothing in his file is earth shattering, but there is this unusual passage about an exorcism:

Jindal has written in great detail about participating in an exorcism of a female friend while studying at Brown. Jindal and the woman in question had an “intimate” relationship,944 but Jindal said he was “careful to avoid any form of physical contact.” He would later speculate on the reasons why he assumed his friend to be demonically possessed, including her “intense flirting with guys.” He also conjectured that she may have been affected by her mother having “offered a sacrifice at a pagan altar in the Far East.”

American Bridge writes about 20 potential candidates in all, though one of them, Ohio Senator Rob Portman, has already announced that he’s not a candidate for president. And one would have to classify Susana Martinez, Nikki Haley, and former U.N. Ambassador John Bolton as distinct long-shots. Others profiled include Ted Cruz, Dr. Ben Carson, Michelle Bachmann, Nikki Haley, Mike Pence, Rick Santorum, Rick Perry, Scott Walker, Paul Ryan, Mike Huckabee, and for the heck of it, Mitt Romney.