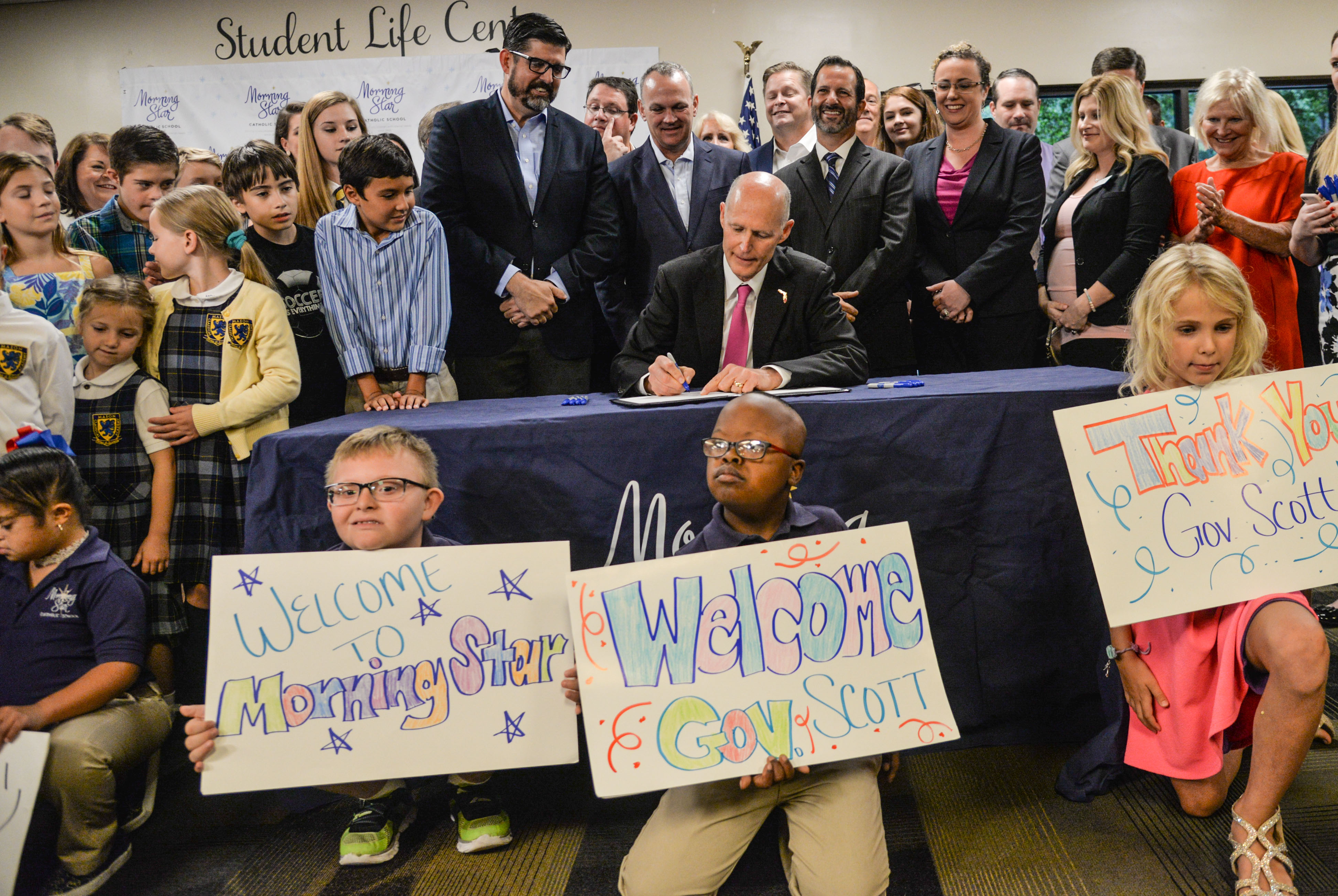 While the education omnibus bill offers changes for all kinds of schools in Florida, from requiring recess to reducing mandatory testing, it accelerates state tax dollar funding for-profit and nonprofit charter and private schools, expands parents’ abilities to chose schools, and tightens Tallahassee’s controls over what local school boards can and cannot do.

Democrats almost universally opposed HB 7069, to the point of declaring it to be sabotage of Florida’s public school system. Joined by public school teachers, parents, PTAs, administrators and many school board members, they had urged for weeks that Scott veto the bill.

“What this legislation does today is it helps all students, which is important,” Scott declared, a few moments before signing HB 7069, ending weeks of speculation of whether he would sign or veto the controversial measure since Corcoran and his team pushed through a dramatic rewrite on the last day of the Legislation Session.

For Scott and Corcoran, the architect, the bill declares a major shift from continuing reliance on what Republican state Rep. Michael Bileca of Miami described as continuously-failing “traditional public schools.” If Corcoran is the architect of HB 7069, he credited Bileca and Republican state Rep. Manny Diaz Jr. of Hialeah for being the engineers, finding the ways to make it work.

The supporters of traditional public education put up an almost universal opposition.

But Scott, Corcoran and others called the bill Florida’s best hope.

“It is the greatest pro-family, pro-parent, pro-teacher session that we have had in the history of the state of Florida,” Corcoran said. All those things that we had listened to and heard, whether it is too much testing, whether we’re testing too much, whether it’s recess for kids in K-5, whether its pay raises for our highly-effective and effective teachers, whether it’s taking care of children with disabilities and giving them those funds to make those decisions themselves.

“We finally went in and said, ‘Hey, we’re the third-largest state, in the richest country in the world, and we have 195 failure factories, 340 if you just count a single year, the year we’re in right now, those are kids who are being robbed of dignity and hope, and a chance at a world-class education and a future in this world,” Corcoran said. “We go in there, and we address it, and we allow those kids an opportunity to come in go to a school, regardless of ZIP code, regardless of where they fall on the wealth scale.”

Little was said of the critics who say the bill will drain more away from the traditional public schools, including control. But Scott and the others have heard the criticism for weeks, since Corcoran unveiled the massive HB 7069 on May 9.

“If we didn’t have any critics, if we didn’t have people fighting back against us, we weren’t doing anything. This really does something to change the status quo,” Diaz said.