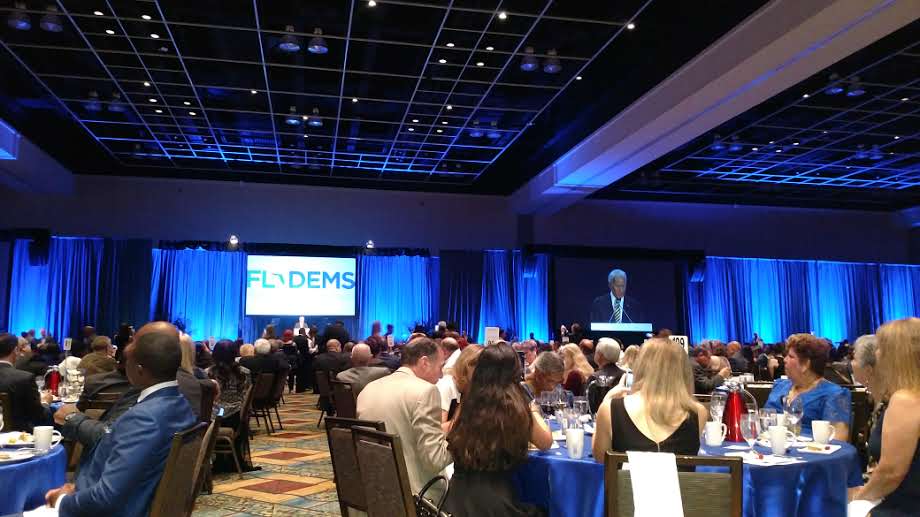 Questions like: Was it too much of “identity politics”? Were they too elitist?

Joe Biden has heard and read about those discussions, and he’s sick of them.

“This phony debate going on in the Democratic Party, the Hobbesian choice that we’re given — we either become less progressive, and focus on working folks, or forget about working folk and become more progressive,” he said while giving the keynote speech to more than 1,200 Democrats at the party’s Leadership Blue Gala at the Diplomat Hotel in Hollywood.

“There is no need to choose, they are not inconsistent,” he said to a cheering crowd.

That’s easy for Biden to say. Biden’s unique political persona as a longtime member of the U.S. Senate representing Delaware has been one of representing the working class whites that Clinton lost to Trump last fall.

Biden himself thought hard about running for president, but with no clear daylight and so much of the Democratic Party establishment supporting Clinton (including President Barack Obama), he opted to stand down, but made the case on Saturday that the party could win back those voters, with an obvious inference being that he could be that candidate to do so in 2020.

Citing congressional ratings that showed him to be among the top ten liberal senators in the nation in his 36-year career, Biden said he has been a progressive and someone who could capture the working class vote, so Democrats should know that they could get those votes as well.

“These folks we’re talking about who left us — they voted for a black man named Barack Obama!”

In fact, exit polls show that approximately 12 percent of voters who supported Obama turned around and chose Trump in 2012.

The former Vice President talked about the working class voters that the Democratic lost in the crucial Rust Belt states of Michigan, Wisconsin and Pennsylvania. He said it was things like digitalization and automation that are putting people out of work, in what he called “this fourth industrial revolution” which is causing real anxiety and fear among many Americans.

“They’re worried that they won’t be able to keep up,” he said. “So we saw of playing to their fears, their lesser angels, their basic instincts, rather than their better angels can still have a powerful impact as a political tool.”

He then dug deep into what he said was the “hopelessness” of some of these Americans, mentioning the statistic that white men aged 45-54 who are dying at a quicker rate than any other demographic right now.

“Highest rate of drug abuse. Not the ‘hood. There,” he barked.

And Biden talked about how that anxiety can play out by lashing out at “the others,” such as undocumented immigrants, Muslims and the transgendered. “Anyone not like you can become the scapegoat.”

It was a compelling speech, marred only by a detour into how cutting tax loopholes could free up money to pay for the community college being the only soft spots in the 51-minute address.

He also chastised Democrats for failing to think big, going for an incremental change instead.

“What the hell is happening?!” he asked. “We build new things by breaking old things.”

“No, no. I’m being deadly earnest,” he followed up, one of half-dozen times he would point out his previous comment, making sure everyone knew he wasn’t joking.

While his intensity came close to yelling at the audience at points, a few times he dropped down to a whisper, where the audience had to literally lean in to hear him, such as when he described a conversation with his father, who once told him: “Joey, I don’t expect government to be able to solve our problems, but I do expect them to understand them. Just understand them.”

Remaining sotto voce, Biden admitted: “That slice of people that Barack and I had, Democrats have always had, that don’t think we understand them anymore. It’s not a lot, but it was the difference in the election.”

The former VP also asked for more civility in our politics, without mentioning the current president’s name. “We have to treat the opposition with more dignity,” he said, then boasted that there wasn’t a single Republican on Capitol Hill who doesn’t trust him or won’t talk to him.

The 74-year-old Biden recently launched “American Possibilities PAC,” a political-action committee that will keep him engaged to help other Democrats, but immediately sparked more discussion about a possible 2020 run, when he would be 77.

Then again, Donald Trump is already the oldest president in our history, having turned 71 last week.

Though there will be plenty of other Democrats in the mix, two of the leading lights — Bernie Sanders and Elizabeth Warren — will also be in their 70s in three years. Sanders would be 78; Warren would be 71.

previousAlex Sink: Anger over HB 7069 could be Dems winning issue in 2018

nextRick Kriseman: As a father, an obligation to support climate action