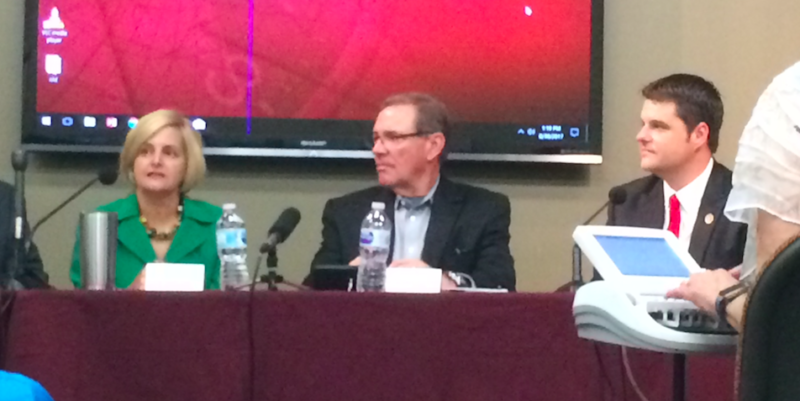 China wants “information dominance” and is willing to engage in “political warfare” to get it, an expert said Wednesday at a Tallahassee town hall on the communist country’s theft of intellectual property, or IP.

The hour-and-a-half event on the Florida State University campus was billed as a Congressional “field hearing” by Republican Congressmen Matt Gaetz and Neal Dunn, both of whom represent Florida Panhandle districts. State Rep. Loranne Ausley, a Tallahassee Democrat and IP attorney, also attended the event.

Dean Cheng, Senior Research Fellow for Asian Studies at the conservative Heritage Foundation, told an audience of about 50 that China seeks “comprehensive national power,” and stealing IP is one means to get it.

“One Chinese observation is: ‘Before the soldiers march and the bugles sound, information warfare is already underway,’ ” he said.

As a June report by CyberScoop explained, “Hackers working for the Chinese government again appear to be conducting economic espionage against private U.S. companies and other American organizations, experts told lawmakers during an open Senate Committee on Foreign Relations hearing.”

He signed an executive memo asking the Office of the U.S. Trade Representative to “determine whether to investigate state-backed theft by China of intellectual property from American technology and defense companies,” the Times reported.

Derek Scissors, an expert on the Chinese economy at the conservative American Enterprise Institute, explained that China knows how to innovate—it just doesn’t like the idea of competition.

If a Chinese company, many of which are state owned, sees an idea it likes, “they’ll steal it,” he said.

The panel included Dean Minardi, CEO of Tallahassee-based Bing Energy, which is embroiled in federal litigation against its sister Chinese company, Nantong Bing Energy, over the alleged theft of hydrogen fuel cell technology.

It’s “not just an accusation: It is very real and it hurts very real people,” Minardi said, calling it “breathtaking thievery on a grand, international scale.”

China engages in an “outright pattern of stolen ideas,” the “immoral equivalent of an act of war,” he added. Some of the ideas were developed by FSU researchers.

Yung Chen, Nantong Bing Energy’s CEO who attended the hearing, called Minardi’s side of the story “made-up … it’s a lot of conspiracy behind it.”

Gaetz, of Fort Walton Beach, said after the hearing “the United States government does not have the sufficient tools to be able to curb China’s intellectual property theft.”

Congress “has an obligation to develop to develop better tools and work with the (Trump) administration to stop the theft of American ideas,” Gaetz said.