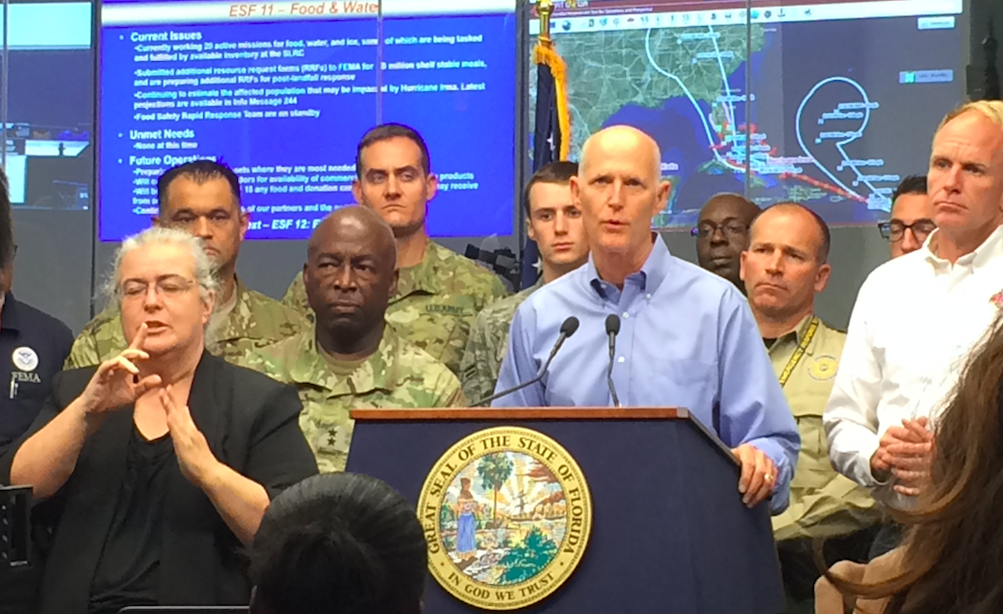 “Our state has never seen anything like this before,” he said. The governor spoke at an evening news briefing from the state’s Emergency Operations Center in Tallahassee.

“Think about that: It could cover your house,” Scott told reporters. “This storm surge will rush in; it could kill you.”

The governor said that residents who have been ordered to evacuate should leave immediately: “Leave now. Not tonight, not in an hour. Now.” An official said later that about 5.6 million of the state’s 20.6 million residents are under evacuation orders.

Lee and Collier residents should be on the road by midnight, he added. “After that, do not get on the road … please go to a shelter.” Scott is from Naples.

“This storm is wider than our entire state; it is life threatening (from) coast to coast,” he said, mentioning 1992’s category 5 Hurricane Andrew, which caused $26.5 billion in damage and killed 65 people.

“Irma is more devastating,” Scott said. “Possessions can be replaced. Your family cannot.”

“Every time the track shifts, it creates a hazard for a different part of the state,” he said.

The governor, a former private hospital-chain CEO, also asked the state’s businesses to “be compassionate” with employees, allowing them time to prepare for the storm or leave, as needed.

He also said traffic jams “are getting cleared,” but evacuations are “not meant to be convenient; they’re meant to be safe.”

About 1,700 Florida Highway Patrol troopers are working 12-hour shifts, and state and local officials are coordinating to make sure gasoline is available and power can be restored as quickly as possible, he said.

Scott thanked the 75,000 people who have signed up as post-storm volunteers, but said more are needed: “Let’s stay together and help each other.”

nextTakeaways from Tallahassee — Be safe, everyone