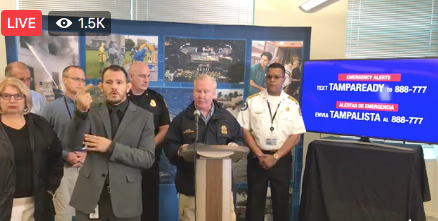 Tampa Mayor Bob Buckhorn declared Sunday morning that a curfew will begin tonight at 6 p.m. in Tampa, and will not be lifted until he and other city officials deem it safe after Hurricane Irma passes.

“I’m serious about that and Tampa Police is serious about that,” Buckhorn said, adding, “We will be very aggressive with anybody we find looting. There is nothing worse than taking advantage of your fellow citizens at a time like this. We will not tolerate in any way shape or form, anyone we catch, engaged in criminal behavior, particularly in the areas that have been hardest hit by this hurricane.”

The mayor added that the curfew needs to be in place to allow crews to remove damaged power lines and/or downed trees.

“If you are out on the streets after six o’clock, we are going to challenge you and find out what you’re doing out there,” said Tampa interim Police Chief Brian Dugan, calling on people to show patience and compassion. “We are relying on the good people of Tampa to tell us what’s going on in their neighborhoods, and to point out who doesn’t belong in their neighborhoods.”

It will be a misdemeanor offense if a citizen is cited for violating the curfew. Dugan said he has already spoken with Hillsborough County State Attorney Andrew Warren about the city’s intentions. “We’re going to do our job and then assess everything in the end,” Dugan said.

Buckhorn says that some parts of Tampa will probably be less deleteriously affected than others after the storm passes, and those areas of the city could have the curfew lifted first.

Dugan said the curfew could possibly last two days, adding that it was difficult to predict without knowing how much damage Irma inflicts on the city.  “They need to stay inside until we give the all clear,” the chief said of his expectations of the public.

Dugan also said that Tampa Police officers have been working with the homeless in Tampa over the past few days to advise them to go to a shelter.

The mayor also had chilling news regarding electricity that is expected to get knocked out at some point tonight.

“We can expect to have days, if not weeks without power,” he said. “We just gotta hang in there and bear with each other and rise to the occasion.”

Buckhorn said that Tampa is about to take a solid whacking from the coming storm.

The city of St. Petersburg is placing a curfew as well, beginning at 5 p.m. this afternoon. Mayor Rick Kriseman said this morning that the city would not be citing offenders, but simply wanted to get everybody off the roads.

previous'Pray for us': Hurricane Irma begins its assault on Florida