Gwen Graham: Hurricane Irma showed Florida isn't as prepared as it should be 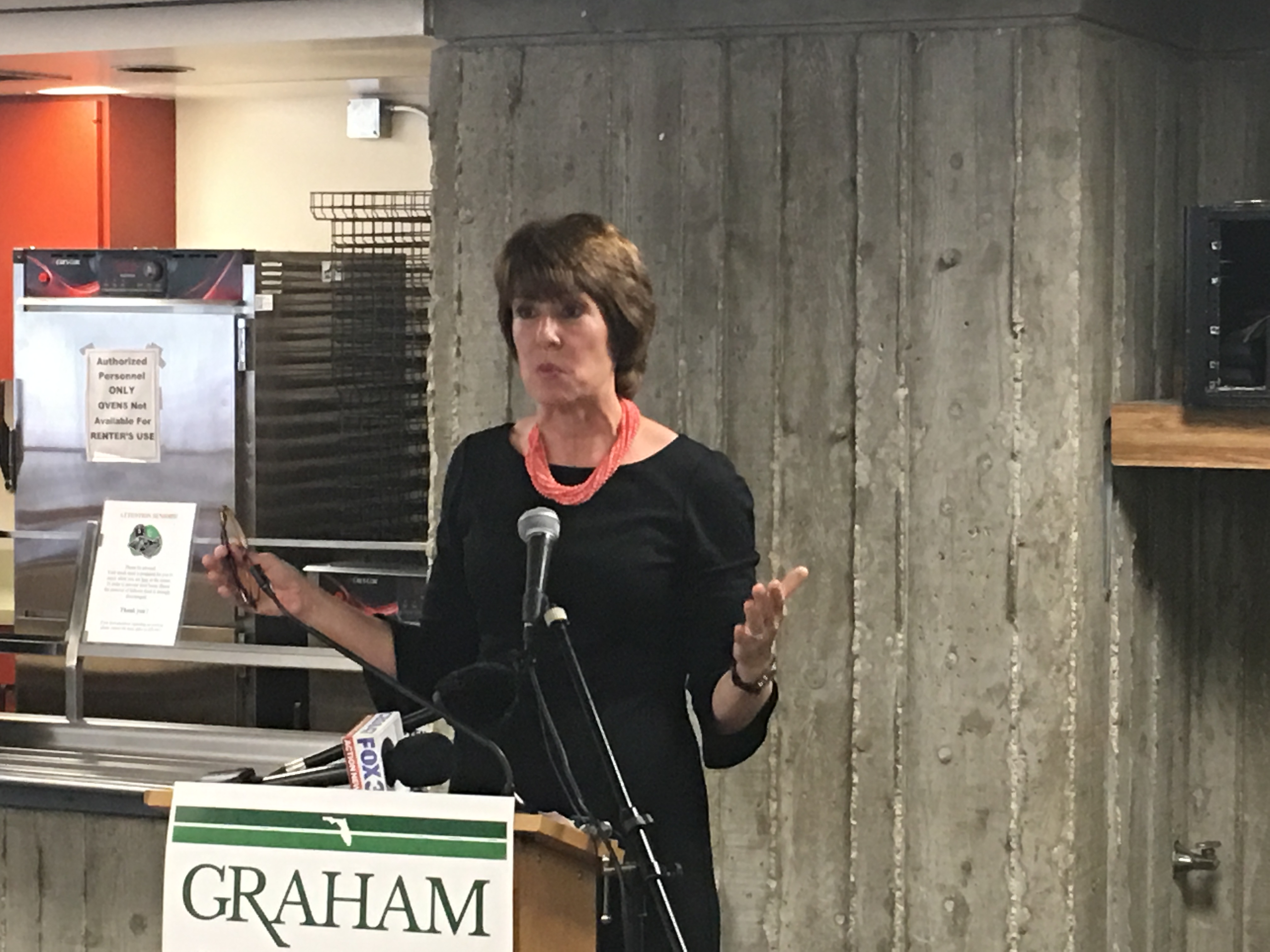 Democratic gubernatorial candidate Gwen Graham believes Florida should have been better prepared to handle the impact of Hurricane Irma.

“The state of Florida was not ready for this storm,” Graham declared Saturday night. The 54-year-old attorney and former Tallahassee-area congresswoman made the comments while delivering the keynote address before a record crowd at the Hillsborough County Democratic Executive Committee’s annual Kennedy-King Dinner in downtown Tampa.

Graham said the destructive storm – which hit the Florida Keys as a Category 4 hurricane last Sunday morning before moving its way through the state, proves that state lawmakers need to address climate change and comprehensive hurricane preparedness.

Considered the establishment favorite, Graham began her 19-minute speech by talking about the selfless acts performed by Floridians throughout the state during what was an excruciatingly stressful time.

Graham’s Hurricane Irma experience involved setting up and supervising a shelter at Richards High School in Tallahassee. She said that all the preparations had been done correctly at that shelter, “but when the power went out across the state of Florida, it became clear that we were not as ready as we needed to be.”

Governor Rick Scott has received mostly laudatory reviews, even from Democrats, for his handling of the storm. But Graham didn’t go there. She insisted that her criticisms weren’t political , but practical, saying that the state has to be better prepared for when the next major hurricane comes Florida’s way.

“They have been decades in the making,” she said about the lack of proper preparation. “Hurricanes have grown stronger, but the state has not done nearly enough to prepare us for the changes we’re witnessing.”

Graham blasted Scott for prohibiting state agencies for even using the words “climate change,” and said she would act in a completely different and proactive way in trying to reduce greenhouse gas emissions in Florida. Those measures would include joining states like California and New York in what is being called the U.S. Climate Alliance, a coalition of U.S. states committed to upholding the Paris Climate Agreement and taking aggressive action on climate change. She also said she would ban oil drilling off Florida beaches and ban fracking throughout the state.

Referring to how the roads running to North Florida were clogged for days as people evacuated before Irma’s arrival, Graham criticized Scott for not reversing southbound traffic on the major interstates and state roads. But she said the state wasn’t prepared to do that because that would have cut off gas and emergency crews from reaching South Florida.

“Supplying every community is vital, which is why the state must develop a plan before the storm, capable of reversing highway lanes and also allowing for providing crucial needs for those south,” she said. “The day will come when we must reverse traffic to once again evacuate major cities, and the state must have a plan and a willingness to do that.”

Graham then spoke about the biggest tragedy connected to the storm – the news that eight elderly patients died at the Rehabilitation Center at Hollywood Hills after the nursing home lost power. Democrats have seized on the incident, with U.S. Senator Bill Nelson calling it “an emerging scandal of gargantuan proportions.” Graham has called for an investigation and made a public information request for Scott’s cellphone records shortly after a CBS affiliate in Miami reported Friday that the executives at that nursing home called Scott’s cell phone asking for help getting their power back on.

Graham cited legislation proposed in 2004 that would have considered safety measures to protect seniors in nursing homes — legislation that she said was stopped by industry lobbyists who said it was “too expensive.”

“Eight Florida seniors died because our system failed them,” she said. “They died, in part, because elected leaders failed to see the real cost, the human cost.”

Graham then threw a jab at House Speaker Richard Corcoran, saying that an hour after the media first broke the news about the deaths in Hollywood, Corcoran was tweeting about tax rates. “It’s a sickening example of how the politicians in Tallahassee have the wrong priorities for the wrong people,” she said.

Corcoran is contemplating a run governor; Adam Putnam and Jack Latvala are the only two major Republicans to have entered the race to date.

The other two Democrats in the race are Orlando-area businessman Chris King and Tallahassee Mayor Andrew Gillum, who showed up to the VIP party before the dinner began and earlier spoke to more than 100 people at a Tampa craft brewing pub.

Still lurking in the shadows are two Democrats who bring tremendous financial resources to the race if they opt to enter it – Miami Beach Mayor Philip Levine and attorney/entrepreneur John Morgan.

DEC officials said 450 tickets were sold to the event, the most in the history of the Hillsborough County Democratic Party.

Local Democrats Karen Clay, Betty Castor and Tom Scarritt were all given awards earlier in the evening.