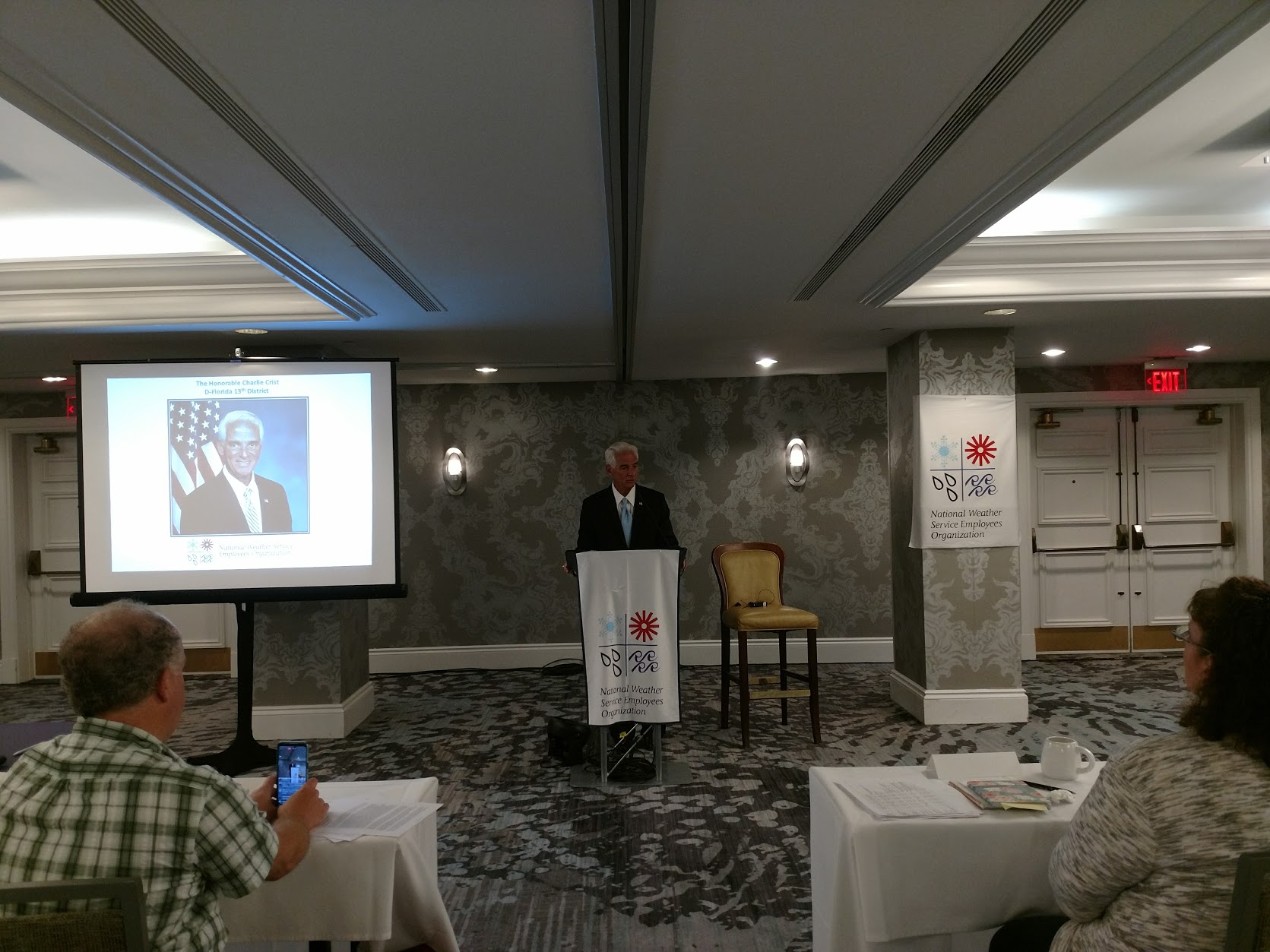 Charlie Crist was already well aware of how unhappy National Weather Service (NWS) employees were about budget cuts proposed by the Trump administration.

But the St. Petersburg Democrat learned a whole lot more Monday about the concerns of career agency staffers over personnel reductions — specifically in Alaska. They say such cuts could damage the accuracy in forecasting storms and other major weather events.

“I’ve noticed that it’s under attack, but sadly a lot of things that make a lot of good sense are under attack in the recommendations from the administration,” Crist told members of the National Weather Service Employees Organization.

The group was holding its annual convention this week at the Vinoy Hotel in St. Petersburg.

Crist said that while the president can propose, it’s Congress that has the power to appropriate, and he predicted that the agency wouldn’t get the proposed five percent budget cut proposed by the Trump administration.

The former Florida governor said that in all of his decades living in the Sunshine State, he’s never seen federal, state and local officials work better in preparing for Hurricane Irma last week, and he said that much of that credit has to go to the NWS and their colleagues. “You are heroes to an awful lot of my fellow Floridians from this past week,” Crist told the attendee. “People are watching your colleagues on television, practically 24/7.”

But the employees with the National Weather Service don’t feel very appreciated these days.

“In Alaska, we have something like a 23 percent vacancy rate,” said Jim Brader, the Alaska Regional Chair with the NWSEO. “Positions aren’t being filled. Some offices have no employees, and so there’s other people filling in.”

Brader added that in one case, a reduction in personnel forced one employee in his office to work 145 days in a row, and some of those were double shifts. He said such reductions in Alaska impact weather forecasting for the rest of the country.

While there are staffing issues in other NWS offices, other employees also noted the significance of downgrading the Alaskan office.

“If you don’t get the critical data into our models, the forecasts are going to deteriorate,” warned Surranjana Saha, who works at the National Weather Service in Maryland. She said that the Alaska region is critical to read out climate forecasts.

“It’s a data void region and whatever radars you get are so precious because this affects the upper stratospheric winds and the wintertime flow over these areas,” Saha said, calling it “gold” to have such information.

“What causes it to make that turn was a mild attitude system was dropping down into the continent, but the information from Alaska is the information that we use to determine where that mid-latitude thing is going to come down so when that storm is going to turn,” he said.

Sobien also said that the NWS has also stopped sending up balloons to get the weather information needed to feed the models that are used to forecast hurricane.

“They just stopped doing that,” he said.

The problems with the National Weather Service aren’t exclusive to the Alaska, however. Brandon Dunston is with the NWS forecast office in Raleigh, North Carolina. He said that his office has lost five operational forecasters in recent years, approximately 40 percent of their meteorologists’ staff.

Although Trump has proposed a budget cut of five percent to the NWS, officials with the agency say the reduction in hiring additional staffers goes back a decade, and they’re still not certain why.

Some NWS employees said they want to have Crist push the chairman of the Subcommittee on Environment on the House Science, Space, and Technology Committee, Arizona Republican Andy Biggs, to call for holding a hearing based on the study the Government Accounting Office has released that confirms the  confirms the vacancy rate in NWS operational units has reached a point where NWS employees are “unable at times to perform key tasks.”

The GAO also found that NWS “staff experienced stress, fatigue and reduced morale resulting from their efforts to cover for vacancies” due to lack of time off and a loss of training.

According to the GAO, NWS managers admit “that employees are fatigued and morale is low” and that employees “were demoralized because they had to cover the workload for multiple vacancies.”