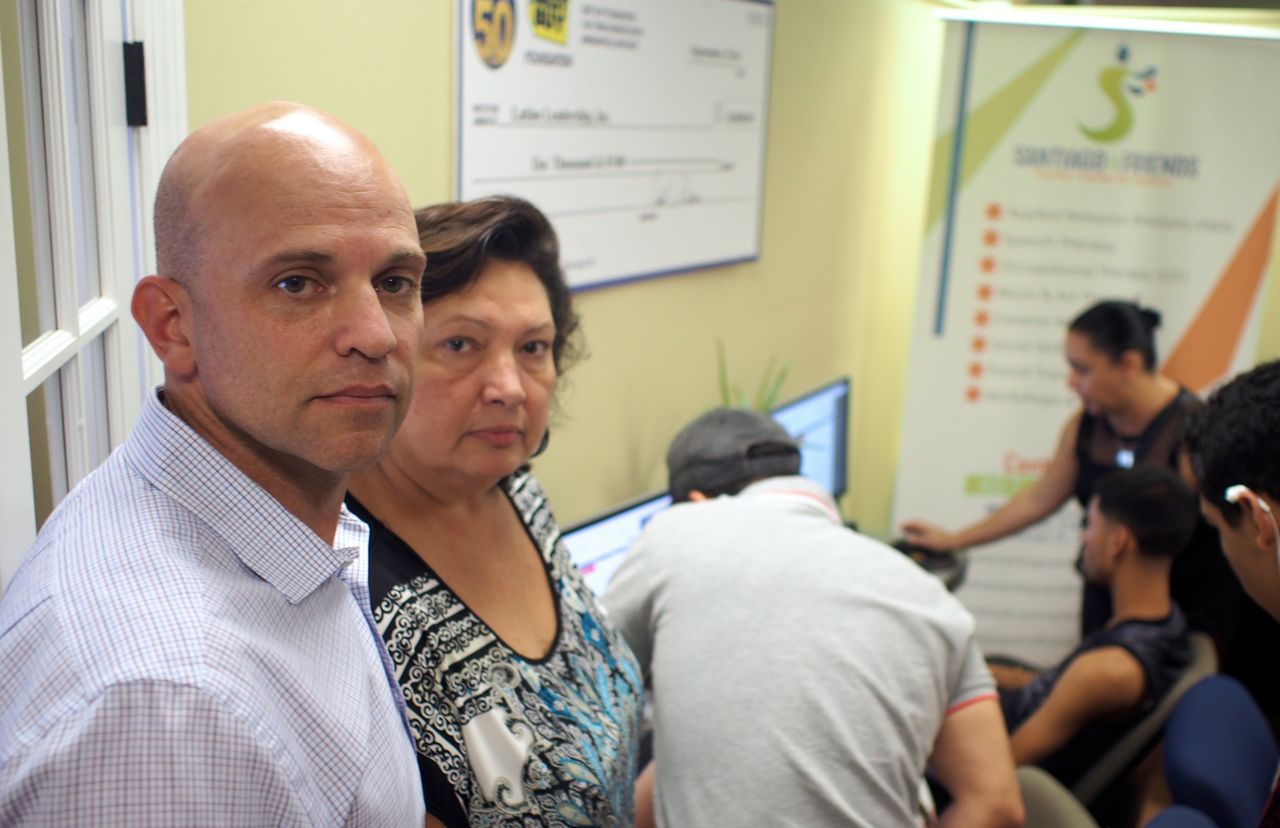 Monday morning there was a line through the parking lot at the Puerto Rico Family Response Center in Orlando: Puerto Rican families waiting for it to open to offer relocation help in Florida, and LatinoLeadership Inc. President Marytza Senz, who is running the ad-hoc center, said she also took 40 calls by 7:30 a.m.

That’s in addition to the 150 or more calls that came in over the weekend, she said.

“We are overwhelmed,” Senz said, though the center, a crowded bustle of activity on Orange County‘s east side, was successfully helping Puerto Ricans evacuating from the devastation of Hurricane Maria with everything from places to stay to enrollment of children in Orange schools, and from job placement to obtaining prescriptions.

On Monday Gov. Rick Scott announced the state would open Puerto Rico disaster relief centers at Orlando International Airport and in Miami to help the still-unknown number of islanders who are, or will be, fleeing to Florida because they have nothing left at home.

He also declared a state of emergency in Florida, freeing up officials to provide a variety of help.

Other agencies are gearing up too, along with various churches and civic groups. Yet coordination and red-tape management already are adding to more fundamental problems, like families who once had decent lives showing up in the Sunshine State without paperwork and, in some cases, without an extra set of clothes.

LatinoLeadership and the Florida Hispanic Chamber of Commerce have established the Puerto Rico Family Response Center at LatinoLeadership’s modest and hard-to-find center at 8617 E. Colonial Dr. They also have another advantage: Senz’ son-in-law is state Rep. Rene Plasencia of Orlando, who, since returning from Puerto Rico himself over the weekend, is lending a full-time hand there. He’s using his connections to reach into local and state bureaucracies, even Scott’s executive office, to get help.

They’re planning to move some of the program soon to the Azalea Park United Methodist Church, which is not far from Orlando International Airport. Other issues are more complicated and specific to unique needs, with some groups beginning to step up. The Puerto Rican Bar Association of Florida, for example, recognized that all three law schools in Puerto Rico are shut down indefinitely. Two of them, and their deans, cannot even be reached. So the group, led by Anthony Suarez of Orlando and Marie Masson of Clermont, is arranging to get Puerto Rican law students admitted to stateside law schools on an emergency, temporary basis. Already 51 are in the process of transferring, and more are expected as word somehow gets to them on an island where almost no one has electricity or phone service.

No one is certain how many Puerto Ricans might be coming to Florida, and transportation off the island still is limited, booked up for weeks. Plasencia said he supposed 50,000-100,000 may be coming. Other estimates have exceeded 100,000, and he said he heard that while he was on the island caring for family over the weekend.

Clearly, as evidenced by the crowds at the newly-named Puerto Rico Family Response Center, the flow has begun.

About half of those showing up now have family or friends in Central Florida, but many do not, Senz said.

“They are homeless,” she said. “Families are showing up homeless.”

Some have health crises. One cruise ship came into Miami filled with hospital patients. One woman from that ship arrived at the center this morning in the midst of cancer treatment. She had nothing, and no idea where to go. Another family showed up that had been on a pleasure cruise when the hurricane hit, and rather than return to Puerto Rico, the ship dropped everyone in Fort Lauderdale. The family made their way to Orlando, and to the center, where they said their 11-year-old son has diabetes and needs insulin.

They’re working on it, she said.

LatinoLeadership had run a pantry, and had filled it with goods in the previous week to send to Puerto Rico, but now has decided to hand it out to evacuees instead, because they are arriving with nothing. Even those with families and friends locally, many times those families already are struggling financially themselves, so adding four, five, six new family members is almost impossible. The center also has to deal with landlords reluctant to waive lease conditions limiting how many people can sleep in an apartment.

One thing the center can provide, that Senz and others worry the official state centers might neglect, are people from Puerto Rico, who speak the language, who know the towns, who’ve made the transition.

“They need everything. The most important thing is the guidance, somebody who knows the culture really makes a difference,” Senz said.

“What I’ve seen today, some of them, Orlando is going to be home, permanently. Other ones are here here saying, ‘I want to go back.’ But they are crying, because they feel they left their country, they left those they love,” she said. “But what I am saying is they did the right thing for the security of their family.”

Others are finding bureaucratic nightmares, such as the families applying for food stamps but being told they need permanent addresses.

Of the promises from state and local officials to offer whatever they can, “Right now, if it’s happening, it’s a quiet initiative, and nobody knows,” Senz said. “When you see everybody coming here from Puerto Rico, that means people don’t know.”

Plasencia said he’s made those calls and sees the state and local officials mobilizing, but added, “I don’t know if we’ve made the right adjustments already. With the influx of people coming, you just can’t anticipate some of these kinks that are happening. And that’s what we’re dealing with right now.”

One woman in the office Monday said she’s trying to enroll her young brother from Puerto Rico in an Orange County school, but was told she couldn’t without his transcripts. Plasencia assured her that Orange County Public Schools has waived those requirements.

But the school she contacted apparently hadn’t read that memo.

It was another call to make Monday.