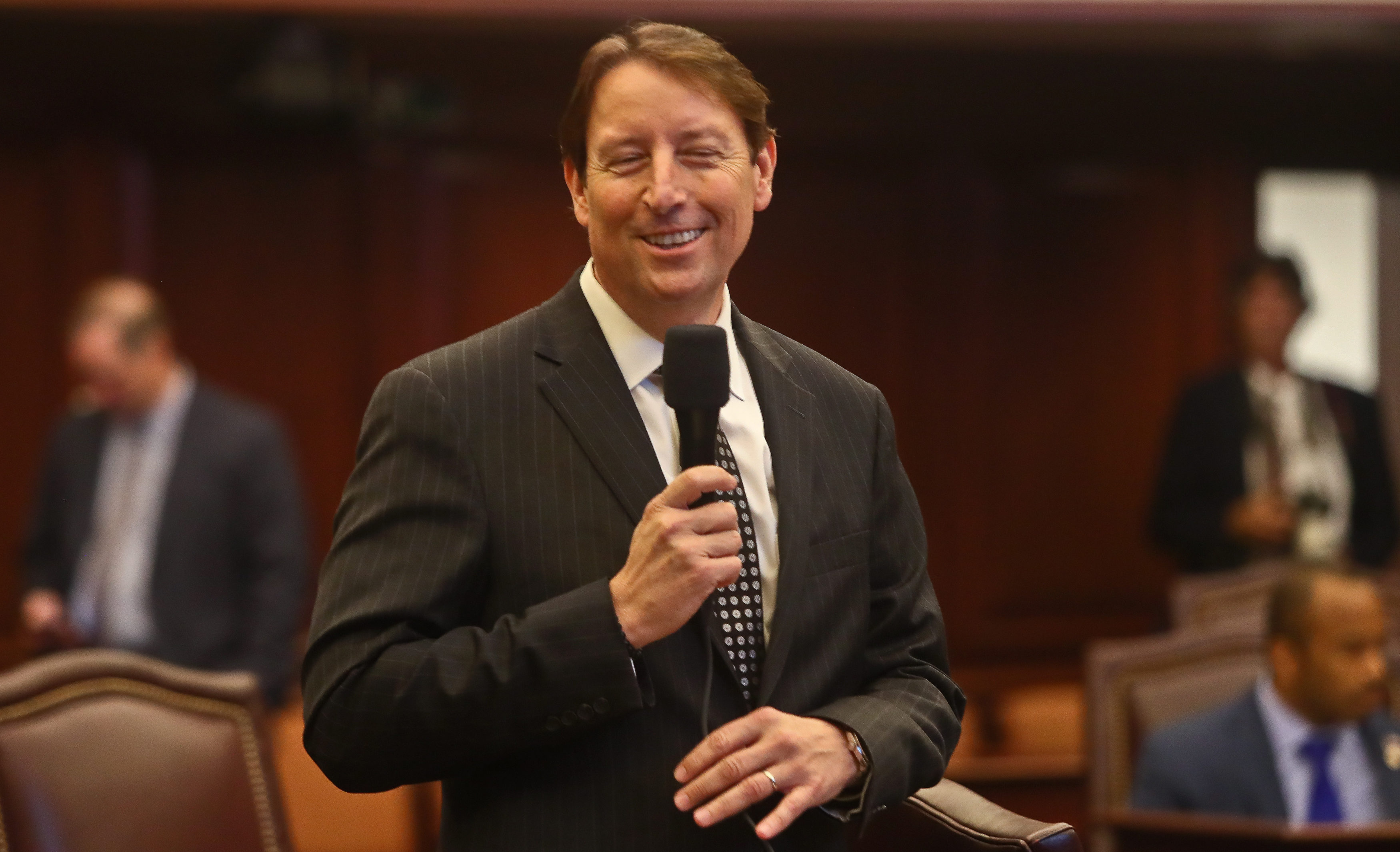 Sen. Bill Galvano, a 51-year-old lawyer from Bradenton, will be designated Tuesday by Senate Republicans as the next president of the Florida Senate.

The Republican lawmaker will lead the 40-member Senate for two years after the November 2018 general elections, assuming the Republicans hold their majority — now at a 24-16 margin — in the chamber.

Over the course of his 13-year legislative career in the House and Senate, Galvano has handled complex issues, including the investigation of a House speaker, a gambling agreement with the Seminole Tribe and, most recently, a major higher-education initiative.

“It’s not accidental that I entrusted one of my top legislative priorities to him,” said Senate President Joe Negron, a Stuart Republican, referring to Galvano’s handling of the Senate’s higher-education legislation.

Negron met Galvano when he was assigned to help the Manatee County lawmaker in his first campaign for the House in 2002. They had a common background as lawyers from medium-sized communities.

“He approaches legislative issues like you prepare for a trial,” said Negron, who has been Galvano’s Tallahassee roommate for about nine years.

Negron said Galvano is also strong in building long-term relationships in Tallahassee, which is important in passing legislation as well as rising in the legislative leadership.

“Bill is unique in that he is equally adept in the policy part of the political process as well as the social component,” Negron said.

Earlier in his legislative career, Galvano focused on health care, chairing a House committee. He later became the chamber’s Rules Committee chairman and then led a special committee investigating the conduct of House Speaker Ray Sansom, who resigned.

In his last year in the House, Galvano was one of the key architects of a major gambling agreement with the Seminole Tribe in 2010.

After brief hiatus from the Legislature, Galvano won election to the Senate, where President Don Gaetz, a Niceville Republican, tapped him to oversee the $20-billion-plus public-school budget. It was Galvano’s first foray as a budget leader.

In 2015, Galvano led the Senate effort to resolve a redistricting challenge to the 40 Senate seats, after a court ruled the 2012 redistricting map had violated the state Constitution.

During Negron’s presidency, Galvano has led the chamber’s higher-education budget panel and is the sponsor of a Senate bill (SB 4) this year that seeks to expand and make permanent changes to Florida’s Bright Futures merit scholarship program.

“It’s made my career more interesting to be able to focus on these areas,” Galvano said in an interview. “And I think it will help give me some depth going forward.”

Major influences in Galvano’s life were his parents, Phil and Betty Galvano.

Galvano’s father, the son of Sicilian immigrants, was a self-made man who became one of the nation’s top golf professionals, claiming a list of clients that included celebrities like Johnny Carson and Perry Como.

Galvano said his father was also a strong believer in self-learning and education. In his honor, Galvano hosts an annual golf tournament each spring and has raised more than $3 million for Manatee County schools.

But Galvano said it was his 82-year-old mother, Betty, who helped guide him into a career of law and politics. He said she has always had an active civic life, evidenced recently when Galvano called her to ask how she was doing during Hurricane Irma and found out she was on her way to Moore Haven as a Red Cross volunteer.

“I really got involved in a lot of different issues through her and it piqued my interest in politics at a young age,” Galvano said.

Galvano’s wife, Julie, is an administrator at Blake Medical Center in Bradenton. The couple are parents of two sons and a 13-year-old daughter, Jacqueline, who is a budding actress and singer. Jacqueline, who keeps up with classes through the Florida Virtual School, recently completed a national tour in the musical “Annie.”

Asked about his legislative priorities as the next Senate leader, Galvano said he is looking to the Senate membership to develop ideas reflecting the scope and diversity of the nation’s third-largest state.

“I want to make sure my message is one of recognizing that everyone can contribute to the process, the empowerment of the members,” Galvano said about his agenda. “And most of all to be a facilitator of their ideas and their opportunities.”

Galvano said he knows the state will face budget challenges in the next few years, including dealing with the aftermath of Hurricane Irma.

He also said he wants to help the state’s citrus industry, which lost crops in the hurricane and has a long-term challenge from citrus greening disease.

Galvano said he would also like to encourage more international trade and continue efforts to diversify the state’s economy, with the aim of creating more homegrown businesses rather than trying to attract businesses from outside the state.

Miami Lakes Republican Rep. Jose Oliva, who was recently designated by the House Republicans as their next speaker, and Galvano will preside over the Legislature in the 2019 and 2020 regular sessions.

Galvano said while he and Oliva may not always agree, they have already established a solid working relationship.

“I think whether it’s known or not, we have been able to resolve and work together on issues far more often than not,” Galvano said. “I don’t perceive that his and mine relationship will be one steeped in gamesmanship, but more based on how we as one team get things accomplished.”

Galvano also said since he began working with Oliva, whose family owns a cigar company, they have found another area of agreement.

“I have to say his cigars are the best I’ve had,” Galvano said.