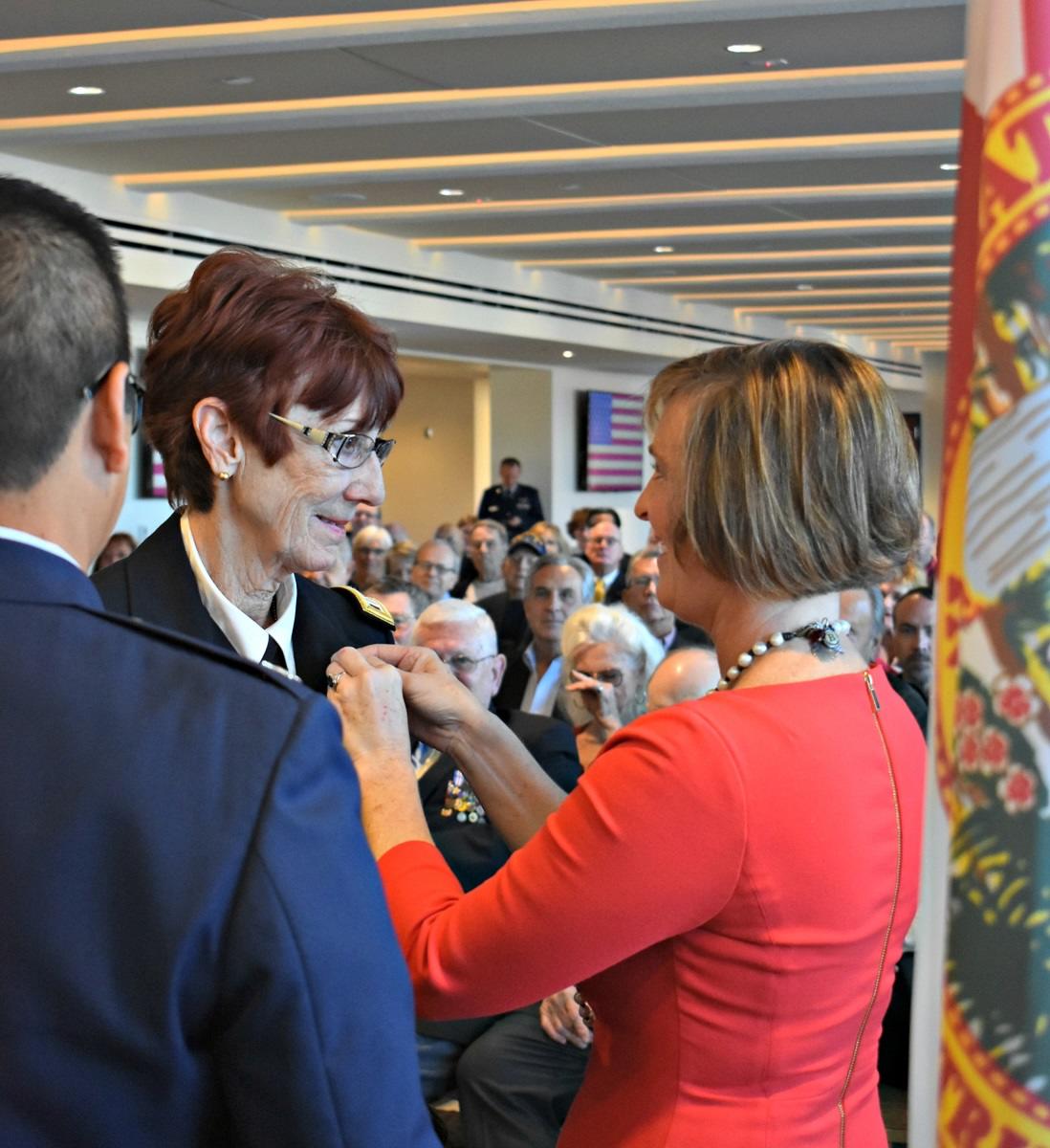 As Veterans Day approaches, more than 40 local members of the armed forces were honored Monday for service during the Vietnam War at a pinning ceremony at Tampa’s Bryan Glazer Family Jewish Community Center.

“Some of you were not welcomed home with open arms — many were — but if you were not … we’re going to rectify that today because you’re all American heroes,” Kathy Castor said in addressing the veterans. “We salute you, love you, and honor you.”

The Tampa-area congresswoman was part of the 50th anniversary Vietnam War Commemoration event, which locally also included the placement of the Vietnam Traveling Memorial Wall on display this weekend at Hillsborough County’s Veterans Memorial Park.

The intensity and tragedy of that war were brought home to Americans again last month with the broadcast of “The Vietnam War,” the 18-hour PBS documentary by Ken Burns and Lynn Novick.

Castor said the series brought back her own memories as a youth about that war, saying, “Walter Cronkite‘s tone changed when we realized, ‘gosh our elected leaders have not been as straightforward as they should during that time.’ Kind of bursting that bubble of idealism …”

Historian and former director of the Florida Studies Program at USF – St. Petersburg Gary Mormino gave a brief recap of Tampa’s history with war, leading up to the social tumult of the 1960s when the war was at its peak.

The 70-year-old academic was in college during that period, and he said there wasn’t a single day then when he didn’t think of Vietnam.

He said the military draft held at that time was unfair and that if the country were ever to employ such a draft in the future, it can’t allow the same type of deferments that allowed many Americans to get out of serving at that time.  Students enrolled in college then could receive draft deferments each year they were in school.

Married men of draft age also could get deferments and were totally out of the draft if they had children.

“Most of my college professors were World War II vets,” he recounted. “Almost none of my colleagues were Vietnam vets.”

“I’d like to think that one of those dogs to sniff our landmines maybe saved someone in this audience,” he said before thanking the soldiers for their service.

Colonel Troy Pananon, vice wing commander 5th Mobility Wing, MacDill Air Force Base, is a veteran of Operation Desert Storm in Iraq. That war was wrapped up within 100 days and was highly popular in the U.S., as it achieved its mission of moving Saddam Hussein and his Iraqi troops out of Kuwait. It was the country’s first major military action since Vietnam ended in the mid-1970s, and led many analysts to say it ended the “Post-Vietnam Syndrome” that the county and military had been under.

Pananon said he and his fellow soldiers received a “hero’s welcome.”

“I think America learned a hard lesson,” he said in contrast to the welcome that Vietnam vets received in America following that war.

The event was moderated by WFLA TV’s Leslee Lacey, a military veteran herself who served in Operation Iraqi Freedom. Lacey got extremely emotional early on in the proceedings, talking about how divided America was during that time.

“It was a difficult war. It was a misunderstood war,” she said, before breaking down and stopping for several moments.

“There’s no choice for a military member except to follow orders, and Americans who didn’t understand that, I believe understand that now,” she said, adding that most Americans believe it’s of “vital importance” to support veterans.

“Especially you. And if we didn’t do it right back then, we’re going to do it now, and we’ll continue to do it throughout American history,” Lacey added.

Castor said what stood out more than anything from the PBS documentary was the patriotism and love of country from so many Americans.

“The bravery of all of you shone through,” she told a crowd of Vietnam veterans and their friends and family on Monday morning.

Castor said every day was Veterans Day in her local congressional office in west Tampa. “If you have the need for a VA claim or appeal, please do not be shy about it,” adding that her office recovered more than $700,000 in benefits owed to veterans in her district.

“That’s the least we can do for your service,” she said.

previousClay County Sheriff latest to back Ashley Moody for AG

nextDarden Rice, Ken Welch give to both sides in St. Pete District 2 race