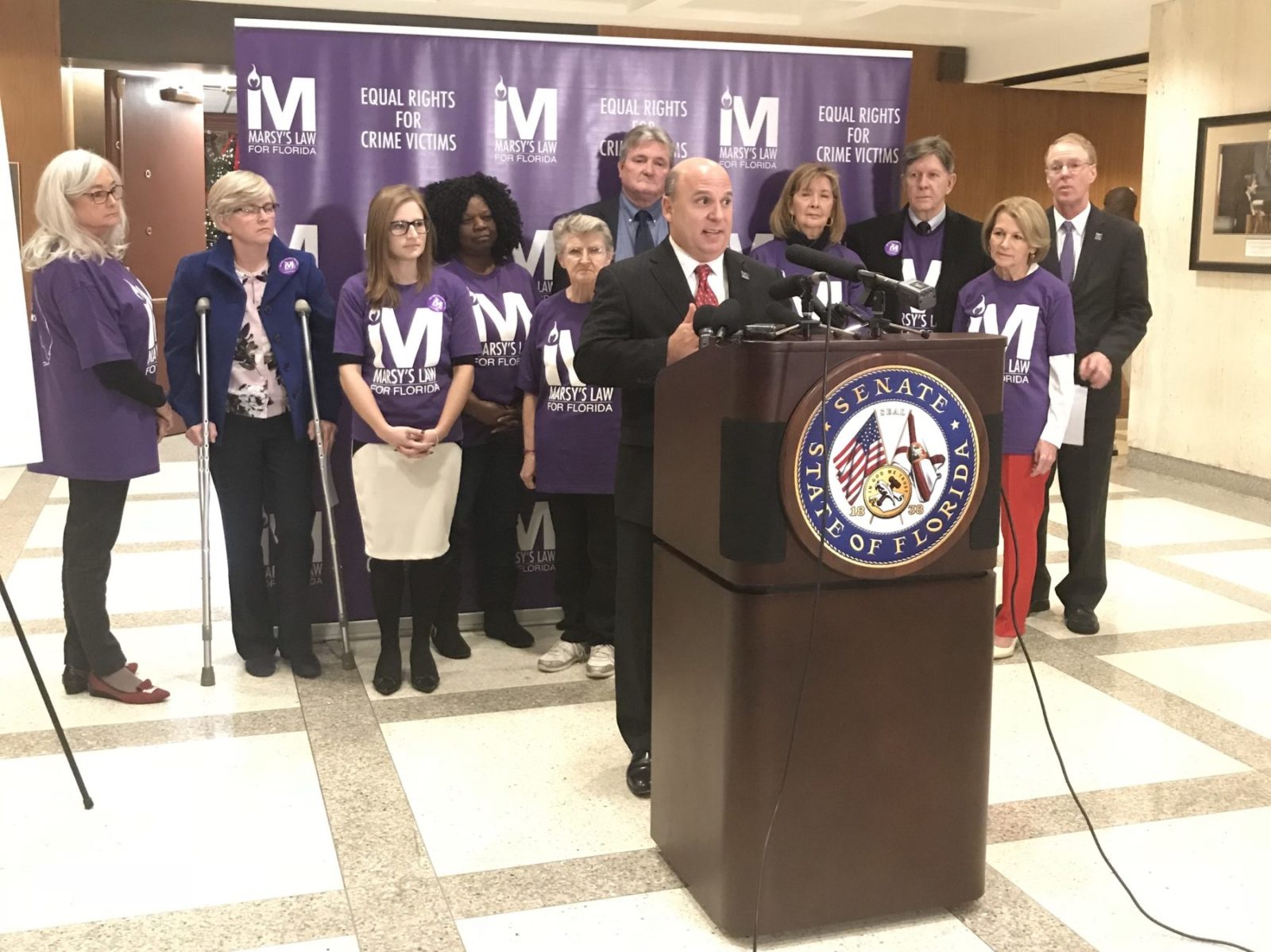 Crime victims and family members are not given the same rights as those of the accused and convicted criminals.

A member of a group charged with amending Florida’s constitution is trying to change that.

Tim Cerio, a commissioner on Florida’s Constitution Revision Commission, is pushing a proposal that would equate rights of victims and their family members with those of defendants and convicted criminals — provisions commonly know as Marsy’s Law.

“The United States Constitution enumerates 20 distinct rights that are afforded to those accused or convicted of crimes,” Cerio said at a press conference on the proposal. “The victims themselves, family members they leave behind when a tragic loss occurs have absolutely no rights in our great document.

“Those who are thrust into the criminal justice system by the actions of others have (no rights).”

Cerio said that most states — all but 15, including Florida — have taken steps to amend their constitutions to enumerate victims’ rights.

Marys’s Law takes its namesake from Marsalee “Marsy” Nicholas of California, who was stalked and killed by her ex-boyfriend in 1983. Marsy’s brother and mother were confronted by the accused murderer in a grocery store. The two family members were not aware the ex-boyfriend was released on bail because they were not notified.

Part of Marsy’s Law stipulates the welfare of a victim’s family and the victim must be considered when setting bail for the accused.

There are other unique provisions in Cerio’s proposal, including protection of the victim’s dignity.

Michael Liles, executive director of the Jacksonville-based Justice Coalition, spoke in support of Marsy’s Law provisions. Liles’ wife was murdered in March, and he shared how victims’ rights provisions could have helped him throughout the process.

“I’d have had the ability to say ‘let’s not have a hearing on the day I’d rather be spending time thinking about my wife,’” Liles said. “They’ve scheduled hearings on anniversaries, birthdays — things that are difficult.”

Cerio’s proposal also includes provisions for victims to be free of harassment, abuse and intimidation, and a right for reasonable protection from the accused — so long as the rights do not interfere with the those of the accused.

Though Plantation Democratic Sen. Lauren Book does not have a vote on the proposal, she made a point of expressing her early support of the measure in a statement. A survivor of sexual violence, she said victims and their families “should not fear that they will go unheard or that the criminal justice process will cause them additional trauma or revictimization… That’s why we need Marsy’s Law for Florida.”

Cerio, an appointee of Gov. Rick Scott, repeatedly explained that his proposal does not seek to limit rights of the accused.

“There should be no takeaway from the important constitutional rights both granted by our federal government and our state constitution to the accused,” Cerio said. “That’s a really important point and its a point that we need to keep stressing.”

Enumerating victims’ rights has polled well in Florida, with one survey finding 85 percent of 700 likely voters agreed with the idea for Marsy’s Law protections.

Still, there is some pushback.

The Florida Public Defender Association provided comments on the proposal at its CRC workshop Tuesday morning, criticizing it on many fronts.

The advocacy arm for public defenders said that a portion of the proposal conflicts with the U.S. Constitution, which provides for a defendant to have a right “to be confronted with the witnesses against him, to have compulsory process for obtaining witnesses in his favor, and to have assistance of counsel for his defence.”

Public comments from the association said, “The longstanding federal rights of defendants and the proposed state constitutional rights for victims are largely incompatible.” It said that’s because Cerio’s proposal would allow witnesses to refuse interviews, depositions and other discovery requests of the defense. The association also is concerned over changes to defendant payments and speedy trial provisions.

The Florida Association of Criminal Defense Lawyers also provided public criticism. The group said some of the provisions would prevent “meaningful discovery,” which could lead to more trials and an in turn an increased burden on taxpayers.

The group also argued that more trials would lead to more exposure of the victim and that some of the provisions in Marsy’s Law would interfere with the rights of the accused.

A letter from Amy Mercer, executive director of the Florida Police Chiefs Association, to the Commission raised concerns over how some of the provisions would be enforced, should Cerio’s proposal pass. Among them: how to “reasonably protect” a victim. Mercer questioned whether that requires effort from law enforcement.

If cleared by the CRC, Marsy’s Law would move to the 2018 ballot, where it must receive 60 percent approval from Florida voters to become a part of the constitution.