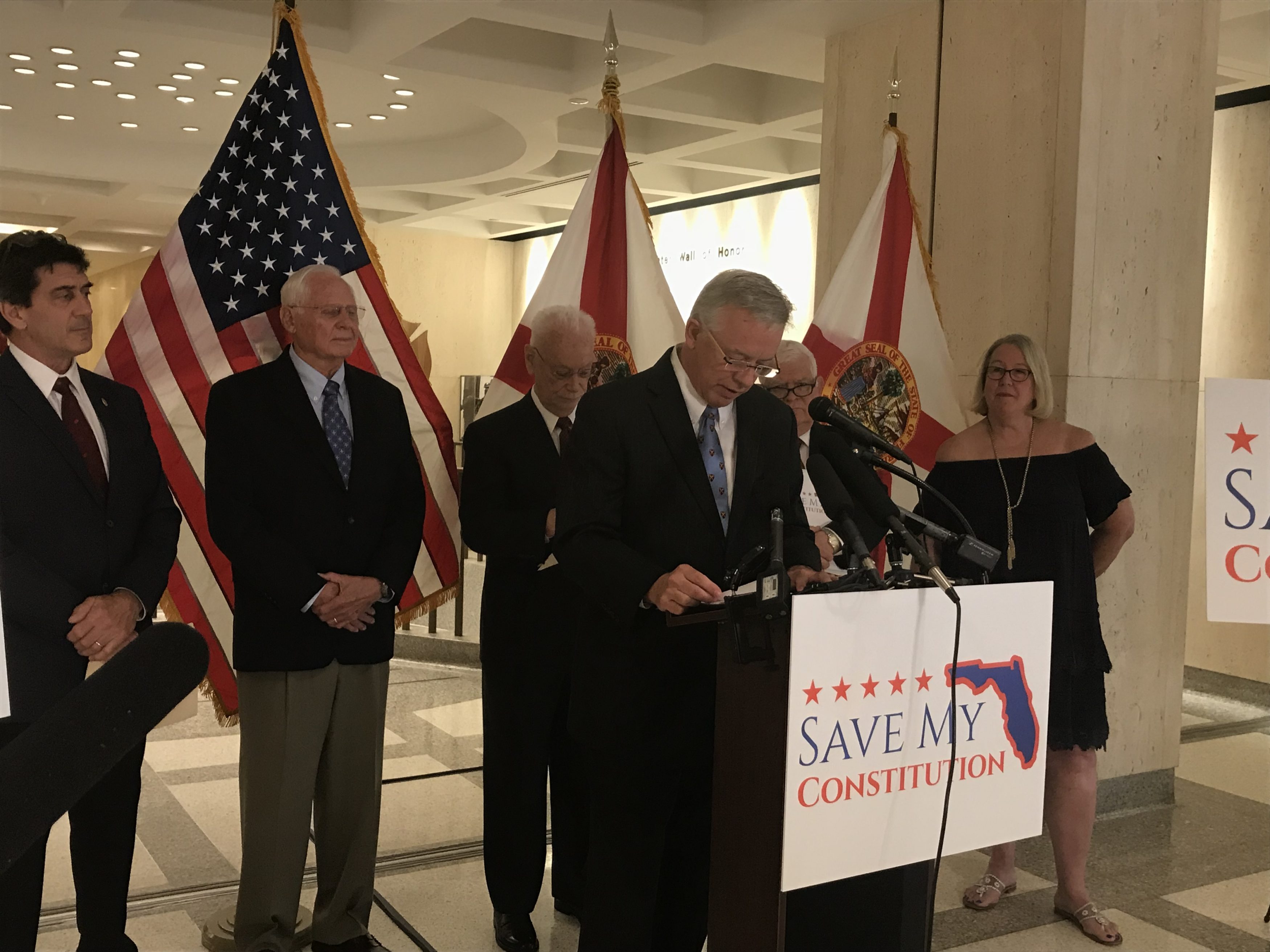 The all-Republican group, “Save My Constitution,” said voting against Amendments 6-13 will help resolve “serious objections” about the CRC process. Members said that could pave the way to “significantly reform” – even “abolish”– the panel itself, which convenes every 20 years to make changes to the state’s chief governing document.

“Our coalition will be earnestly working with our colleagues currently serving in the Florida House and Senate,” said former state Rep. Don Brown. The group also intends to spend money on advertising with its message ahead of November.

Leading the group’s Capitol news conference was former Lt. Gov. Jeff Kottkamp, who served under former Gov. Charlie Crist. He was joined by 15 other former lawmakers, former Lieutenant Governors and former members of Congress as part of the coalition.

“We understand the game of politics, and the influence of special interest groups,” Kottkamp said, calling the CRC “an unelected body that frankly doesn’t represent anybody and is not accountable to anybody.”

Thirty-six members of the CRC are appointed by others in state government, the Governor, House Speaker, Senate President and Chief Justice. The sitting Attorney General, the only elected member of the panel, serves ex officio.

Kottkamp said its proposed amendments represent work conducted “well beyond the scope” of its duties.

The group is primarily concerned with the issue of “bundling” issues in amendments, saying members were compromised by outside interests to “logroll” issues together in the hopes of sweetening the deal for voters to approve the changes. Amendments need at least 60 percent approval to pass.

Amendment 9, for example, would prohibit offshore oil drilling and ban vaping in the workplace. But Amendment 6 is a less-overt example of bundling. It would establish a series of rights for crime victims, known as Marsy’s Law, but would also raise the mandatory retirement age of justices and judges.

“The bottom line is the CRC and their proposals simply cannot be trusted,” former state Rep. Jim Kallinger said.

In a May letter, CRC member Brecht Heuchan, who led the panel’s style and drafting committee, defended the practice of lumping separate changes into one amendment.

“Grouping some ideas together keeps the ballot from becoming too lengthy to complete,” Heuchan wrote. “If all of the CRC proposals were left as single amendments, there would be 25 questions on the ballot instead of 13; and in some areas of our state, each of those measures would be translated into multiple languages.”

Kallinger said some instances of bundling indicate the use of “decoys, exploiting groups like our veterans and law enforcement … to hoodwink voters into supporting a more-controversial issue embedded in that same proposal.”

Take Amendment 7, which would extend benefits to survivors of military and law enforcement members killed while on duty, but would also make changes to the state’s higher education system, including a supermajority requirement to approve certain fees.

One hot-button measure, a proposed ban on betting on live dog racing, is the sole change proposed in Amendment 13, however.

Coincidentally, Kottkamp also represents the Florida Greyhound Association, which won the first round in a legal battle over Amendment 13 by convincing a Tallahassee judge to order it knocked off the ballot. That’s now being appealed in the state Supreme Court.

When asked why it’s encouraging voters to opt for a blanket ‘no’ to each amendment, instead of just the ones that are bundled, Kallinger said it’s because the process itself was “suspect”: “It’s been done so poorly that we can’t not suspect everything else being handled in a deceptive way.”

He added: “The fact that we’re asking the questions, the fact that a lot of this stuff is blatant … I think we’re safe to say, ‘no on everything.’ ”