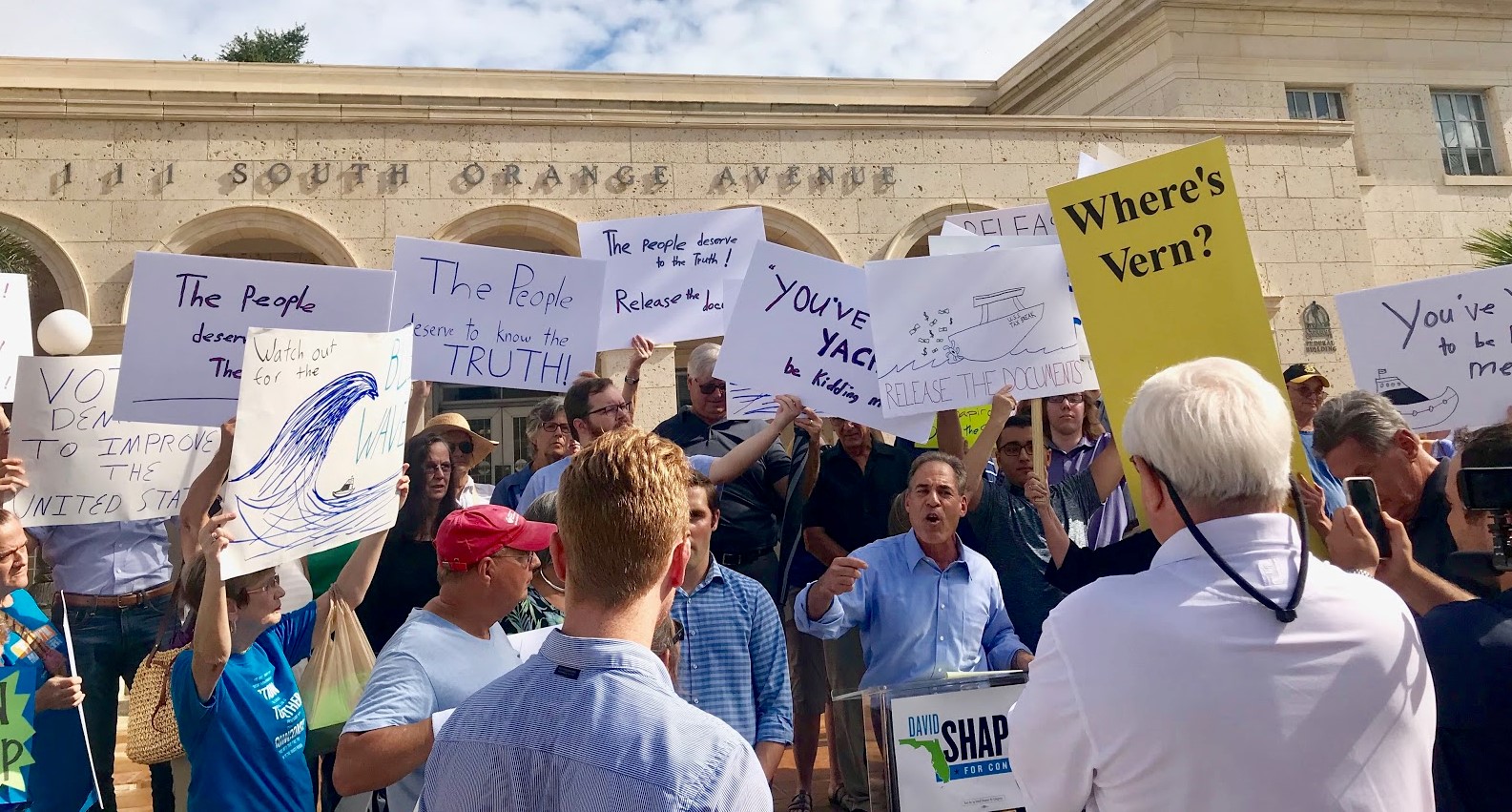 Namely, he led a protest against Vern Buchanan‘s receipt of a foreign loan to help him buy a yacht.

However, Shapiro also faced some criticism of his own from counter-protesters raising questions about Shapiro’s stock portfolio.

A story by the Florida Center for Investigative Reporting showed BMO Harris Bank, the American subsidiary of the Bank of Montreal, issued Buchanan a $5 million loan to help make that yacht purchase.

Buchanan bought the yacht on the same day he and other Republicans voted on the initial version of the GOP tax cut bill late last year. It just so happens BMO Harris also lobbied lawmakers in support of that bill.

At today’s protest outside Buchanan’s Sarasota office, Shapiro called for the public release of the terms of that loan.

“When was that loan negotiated?” Shapiro asked. “What are the terms of that loan?”

While the loan was listed on Buchanan’s financial statements, the terms of the loan were not, making it impossible to know at what rate Buchanan received the loan.

As a member of the House Ways and Means Committee, Buchanan had a high level of influence over the Tax Cuts and Jobs Act of 2017. The Buchanan campaign has said there was nothing improper about the transaction and that representatives of BMO Harris never met with Buchanan one-on-one while they were lobbying for changes in the tax bill.

“It’s deeply concerning that Vern Buchanan would take a $5 million loan for a luxury yacht just as he was writing a tax law that gives huge handouts to the foreign bank that gave him that loan,” Shapiro added in a statement following the protest.

“The people of Southwest Florida deserve to know whether Mr. Buchanan got a sweetheart deal on his loan in exchange for favors in the tax bill. He should answer the call of residents and release the terms of his deal at once. Our community is tired of pay-to-play Washington politician who line their own pockets while Florida families are left to sink or swim, and we are demanding better.”

Late in Shapiro’s remarks this morning, a counter-protester could be heard grilling Shapiro over his ownership of several stocks the protester called “dirty.”

“Shapiro says one thing publicly but does another privately. Just like his investments in drug companies, assault weapons manufacturers, and greenhouse gas polluters.”

Shapiro’s campaign says these stocks were purchased as part of a retirement fund, and were not selected by Shapiro individually.

Maritime purchases and stock portfolios have dominated the Buchanan vs. Shapiro contest for weeks, with progressive advocacy group Floridians for a Fair Shake amplifying the yacht onslaught with a boatload of negative ads.

Goodman left the door open to ending the Mexican standoff between the two campaigns, so long as Shapiro lowers his guard first.

“We’ll talk about [the loan] after Shapiro sells his dirty stocks,” he said.

A video showing the portion of Shapiro’s protest where counter-protesters harangued him is below.