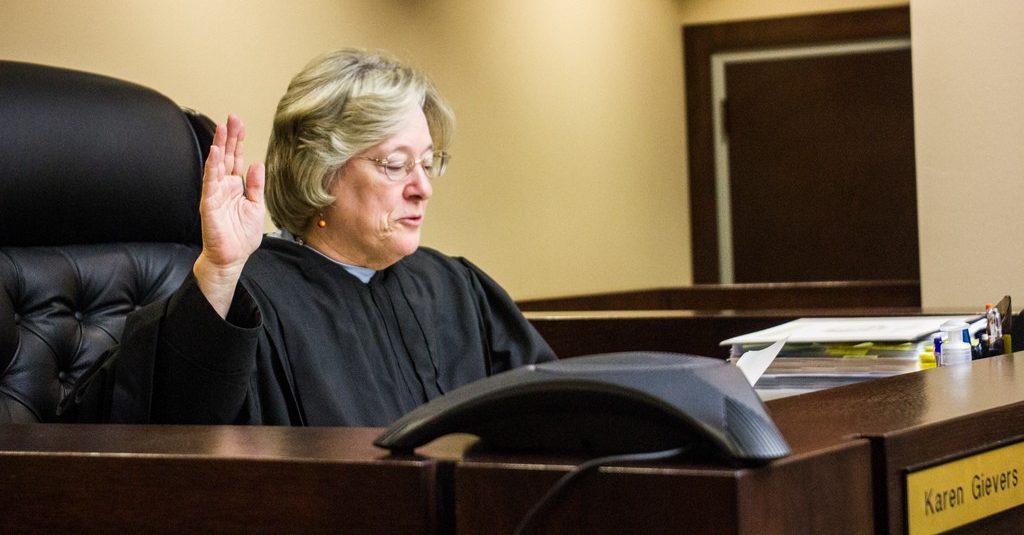 A Tallahassee judge made clear Friday that she’ll hold the Constitution Revision Commission (CRC) to a high standard for straightforwardness when deciding whether its victims-rights proposal deserves a place on the fall ballot.

CRC members understand their responsibility to give voters “full, accurate information, letting the voters know if the Constitution is being significantly affected by proposals,” Circuit Judge Karen Gievers said during a bench trial over the proposed Amendment 6.

“So that the ball isn’t being hidden, and there won’t be ambiguities that can be clarified in later court proceedings,” she said.

“It’s about letting the voters know from the title and the summary that the voters will see when they go into the voting place, or vote by mail in the general election, that we’re giving them truth in packaging of the changes to our state Constitution.”

Gievers heard two separate legal challenges to the title and ballot summary for Amendment 6, which would boost victims’ right to be notified of developments in criminal proceedings and to be heard, among other things.

It also is referred to as “Marsy’s Law,” after a murdered California college student.

In addition, the amendment would also raise judges’ retirement age from 70 to 75, and limit the deference courts give to government agencies’ interpretations of laws and regulations.

Gievers didn’t say when she would rule, but acknowledged time is limited, given that general election ballot language is supposed to go to the printer no later than Sept. 4.

The plaintiffs, including Lee Hollander, a southwest Florida attorney, and Amy Knowles, described by lawyer Harvey Sepler as a private citizen, argue that the title and summary fail to meet the test of clarity.

For example, their attorneys said the language doesn’t convey the extent of the proposed restrictions on defendants’ rights; is ambiguous as to how victims would exert their new rights; and is unclear as to corporations’ standing as crime victims.

The effect, said Mark Herron, Hollander’s attorney, is to “affirmatively hide the ball.”

Defending the language were Karen Borden of the Office of the Attorney General and Greenberg Traurig legal legend Barry Richard, representing Marsy’s Law for Florida, a victims’ rights group supporting the proposal.

They said the language is clear enough to be understood by voters.

“It’s supposed to make a voter want to vote for it if it accurately states what’s in the amendment and the voter believes in it. And is it accurate,” Richard said.

He cited “pretty tough language” from the Florida Supreme Court that such ballot titles and summaries may be rejected only if “clearly and conclusively defective.”

That goes especially for measures proposed by the Constitution Revision Commission, which meets only every 20 years, he said: “If the public is denied the right to vote on a proposal that this group makes, then there is no opportunity to fix it again” for another two decades.

“Of course there is, Mr. Richard. Every year the Legislature can propose new constitutional amendments, put them on the ballot at the next general election. Citizens can step forward,” she said.

“The Constitution Revision Commission knows it meets once every 20 years. They are aware, because they’re very bright people, very educated. And they understand what the rules are that the courts must use to interpret, to make sure that there’s truth in packaging.

“And bundling things together in ways that leave questions and arguably are not accurate or complete raises questions.”

She continued that there have been multiple challenges to CRC-proposed amendments based on grouping, or title and summary challenges. And she acknowledged the question won’t be settled in her courtroom, but rather by the Supreme Court.

“That’s why everyone is working so hard, to make sure we get our parts of this right,” Gievers said.