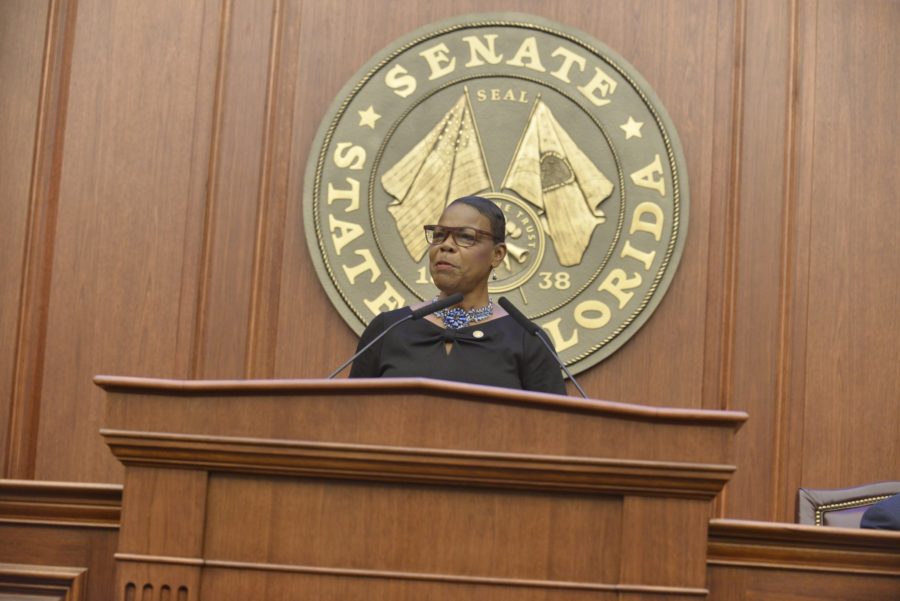 Gibson told the caucus she considers “the role more as a bridge builder, for purposes so much larger.”

She is now only the third woman to serve in the position, and the second African-American woman to do so, after Arthenia Joyner in 2014-16.

The caucus is growing with Janet Cruz‘s win after two recounts in Senate District 18.

Absent from the ceremony, however, was any drama over Gary Farmer being tapped early as Gibson’s successor.

The Lighthouse Point Democrat created a ruckus earlier this year at what was supposed to be a routine vote for the next Democratic leaders.

“At that point, Randolph Bracy unexpectedly nominated Lauren Book. After she accepted the nomination, that’s when things got heated. In an effort to calm down and unify the caucus, Oscar Braynon pulled both Farmer and Book into a private meeting.

“… During the negotiations, Farmer mansplained to Book that she could not possibly fulfill the duties of Leader-designate because she has two young children.”

Gibson graduated from Florida State University with a degree in criminology, and works as a paralegal and community liaison with the Terrell Hogan law firm, according to a bio.

In the Senate, she most recently chaired the Military and Veterans Affairs, Space and Domestic Security Committee.

“She is the mother of three adult children: Kwanzaa Spells, Amar Madyum and Jamaal Madyun,” the bio says. “A devotee of both NASCAR and Formula 1, in her off-time, Gibson can also be found at other sporting events, watching period movies, or tending to her flower garden.”

nextLast Call for 11.19.18 — A prime-time read of what's going down in Florida politics