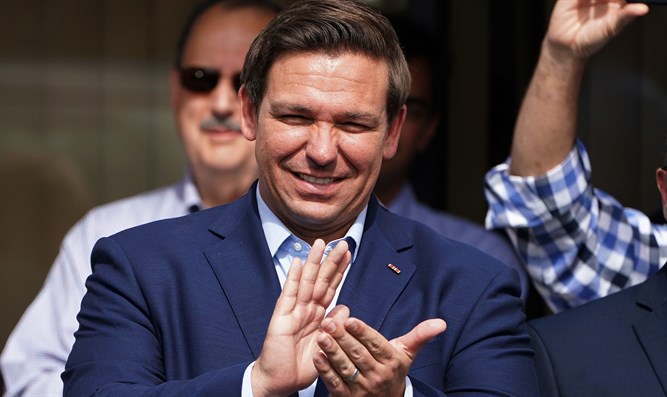 Shane Strum will be Republican Ron DeSantis‘ chief of staff when he takes office in January, the Governor-elect announced Monday.

“I am very pleased to announce that Shane is returning to public service and bringing his expertise to our administration,” said DeSantis in a prepared statement.

“Having spent many years in both the private and public sector, and previously serving two Florida Governors, Shane will be a great addition to our team.”

CFO Jimmy Patronis soon tweeted in response: “Huge congratulations to Shane and to our Governor-elect on an amazing hire. Shane’s public and private sector experiences will be an asset to our great state.”

Strum also was vice chancellor of business development for Keiser University after serving as a 2010 transition adviser to outgoing Gov. Rick Scott.

He’s no stranger to being a chief of staff: He had that position for former Republican Gov. Charlie Crist.

Strum also has been director of corporate and government affairs for Nova Southeastern University’s Huizenga School of Business and Entrepreneurship, and he’s directed Business Development for Blue Frog Solutions, Inc.

Heralded by supporters as a competent and loyal strategist, Strum also brings a strength as a relationship-builder to the inner sanctum of the newly minted governor. DeSantis, a former congressman, was a virtual unknown to most state lawmakers until his primary-election victory over Agriculture Commissioner Adam Putnam in August.

“The first chief of staff for a new Governor, or a Governor who is coming to Tallahassee with a fresh start or a fresh face, you need somebody who’s a steady hand. You need somebody who’s loyal, who’s going to be driving your agenda. And there’s nobody better for taking the reins of the executive office of the governor and doing it in a way that’s going to have Gov. DeSantis be positioned to succeed,” Everglades Foundation CEO Eric Eikenberg, who was Strum’s boss and preceded him as Crist’s chief of staff, told The News Service of Florida on Monday.

The selection of Strum — a onetime head of the Broward County Young Republicans and a familiar entity to many legislative leaders and Capitol insiders, aides and lobbyists — could help the incoming governor establish a rapport with House and Senate members and build on relationships already developed by Lt. Gov.-elect Jeanette Nuñez, a former state representative.

“He’s very strategic and smart about how to get things done and also forms great relationships with people. He’s able to use those relationships to achieve his principal’s goals,” former U.S. Sen. George LeMieux, who served as Crist’s chief of staff prior to Eikenberg, said in an interview Monday. “I really don’t think you will find anybody who has a bad word to say about Shane.”

While DeSantis may be a relative stranger to legislators, Strum, 49, already has a decade-old bond with Senate President Bill Galvano. In the waning days of the Crist administration, Galvano worked to seal a gambling deal between the Legislature, the Governor’s Office and the Seminole Tribe of Florida.

“I always found him to be extremely competent,” Galvano, a Bradenton Republican, said in a telephone interview Monday. “He has a great demeanor. We developed a friendship at that time that has remained strong through the years. I think the governor-elect made a good choice. What it signals is that Gov.-elect DeSantis sees competence and he realizes that a competent chief of staff is going to help him carry out his agenda.”

But newcomers might not want to misconstrue Strum’s mild-mannered demeanor.

“He’s a nice guy, but there’s a lot of nice guys. You also have to be able to carry out objectives and be stern when you need to be. He’s got all of that,” Eikenberg said.

Strum is known for “integrity and loyalty,” Eikenberg said.

“That’s missing in today’s body politics. That’s missing in Tallahassee. And to have Gov.-elect DeSantis have a fresh start and have himself surrounded by a guy like Shane Strum, it’s a great choice,” he said.

Strum’s expertise in health care, expected to be a prominent issue in the upcoming legislative session, includes an eight-year stint — from 2001 to 2009 — on the South Broward Hospital District Board of Commissioners, which he also chaired. The hospital district, which operates under the Memorial Healthcare System moniker, is an independent special taxing district that includes hospitals across southern Broward County. Strum is now a senior vice president for the system.

“South Broward has been thinking out of the box for a while,” said Jan Gorrie, a hospital lobbyist who is the managing partner of the Ballard Partners lobbying firm’s Tampa office. “I think if you want to get ahead of the curve on health care, then the South Broward Hospital District is the poster child.”

After the federal government pared the amount of money it was sending to Florida to offset uncompensated care costs, Gorrie said it was Strum who helped blunt the impact of reductions to large safety-net providers, such as the hospitals in the Memorial system. She also said Strum was influential in the establishment of programs in southern Broward County to help treat opioid-addicted mothers.

Strum is an “excellent public servant” and “real professional” who will help DeSantis achieve his goals as governor without drawing attention to himself, said LeMieux.

“He’s liked by and respected by everybody that he works with,” LeMieux said. “He’s tremendously effective, but he’s not there to raise his own flag. He’s there to help his principal.”

Some material republished with permission from The News Service of Florida.

nextLast Call for 11.26.18 — A prime-time read of what’s going down in Florida politics