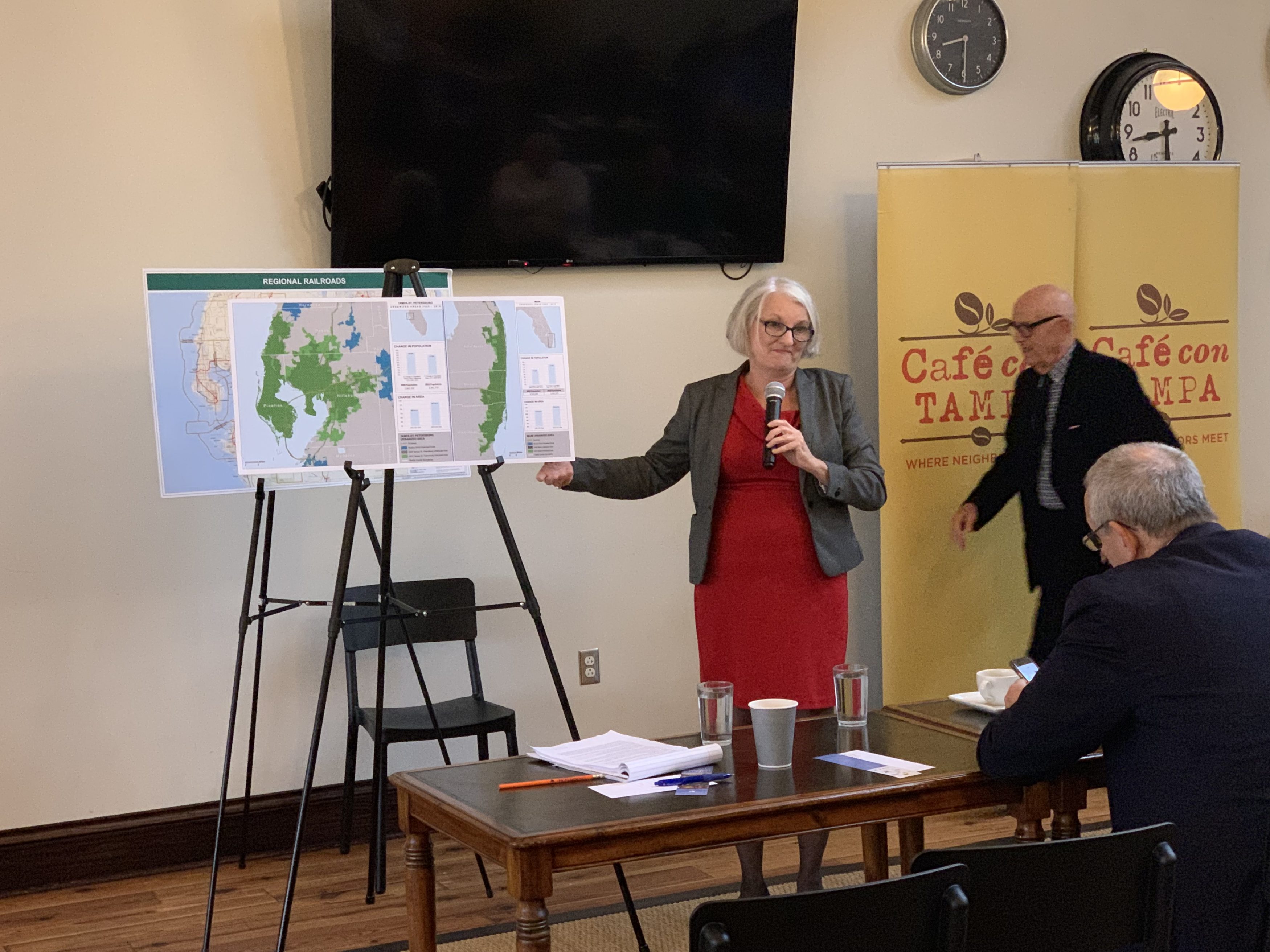 Hillsborough County Commissioner Pat Kemp is warning constituents not to buy into claims that merging local Metropolitan Planning Organizations is a good idea.

Kemp described the concept as an attack on local power on Friday during Cafe Con Tampa, a community forum held at the Oxford Exchange to inform residents of issues facing their communities.

Metropolitan Planning Organizations, or MPOs, were established in the 1960s after the Federal Highway Act of 1962. Spawned during the proliferation of interstates nationwide, the Act requires local organizations in urban areas with populations above 50,000 to ensure communities are represented.

“Highways ripped through the communities significantly destroying neighborhoods,” Kemp said. “[They provided] great ways for cars to bet back and forth but [are] doing a lot of damage to communities.”

Currently, Hillsborough, Pinellas and Pasco counties each have their own MPOs, but there has been a push in recent years to consolidate in order to promote better regional connectivity throughout the Bay area.

“Lack of local control tends to give more power to Tallahassee and the Florida Department of Transportation,” Kemp said. “That’s what they’re trying to do.

“There has to be a strong ability locally to push back at times and temper FDOT.”

She referenced specific projects FDOT is backing, including the Tampa Bay Next process that’s likely to include billions of dollars in highway widening projects and a 41-mile express bus route on Interstate 275.

Hillsborough should have its own local representation through its MPO, on which Kemp serves as its vice chair, she said.

“Hillsborough County is more diverse than Pinellas and Pasco,” Kemp added. “Combining our MPOs would muffle the voices of our population.”

She also said Hillsborough County’s population is significantly younger than that of Pinellas and Pasco.

“Young people want different things for transportation and we need to be responsive to that,” she said.

Kemp listed several transit options for Hillsborough that she thinks would meet the needs of both diverse populations and young residents.

That includes dozens of miles of CSX rail corridors. Kemp’s top priority is one running from the University of South Florida to Ybor City and downtown Tampa. Another links Pinellas and Hillsborough through Oldsmar. That route also connects Safety Harbor, Clearwater and downtown St. Petersburg.

Those routes, she estimates, would cost about $12 million per mile to convert from cargo rail to commuter rail and would stem potentially billions of dollars in future investment around rail stops — something known in the urban planning world as transit-oriented development.

“It’s amazing what SunRail has done,” Kemp said of the new passenger-rail service in the Orlando area.

She said the portions of track that have been open for two years now have spurred $2 billion in investment near the routes.

Interstate projects in Tampa cost about $120 million per mile.

Speaking as a lone member of the Hillsborough County Commission, Kemp’s talking points got a lot of nods. But her ideas aren’t necessarily popular enough among her colleagues to move forward.

Kemp has been a vocal opponent of the 41-mile I-275 bus route, calling instead for dedicated transit corridors that are not on the highway. But her opposition has been met at times by either silence or outright annoyance.

She’s also opposed to highway-widening proposals under FDOT’s Tampa Bay Next. Both projects have widespread support from Tampa’s business community and elected leadership.

Still, with a seat at the table as a County Commissioner and with what will be about $280 million more annually to spend on transportation as a result of the voter-approved sales tax, Kemp’s long-pushed transit solutions could begin to inch closer to reality.

previousDelegation for 12.14.18 — Insights from the Beltway to the Sunshine State