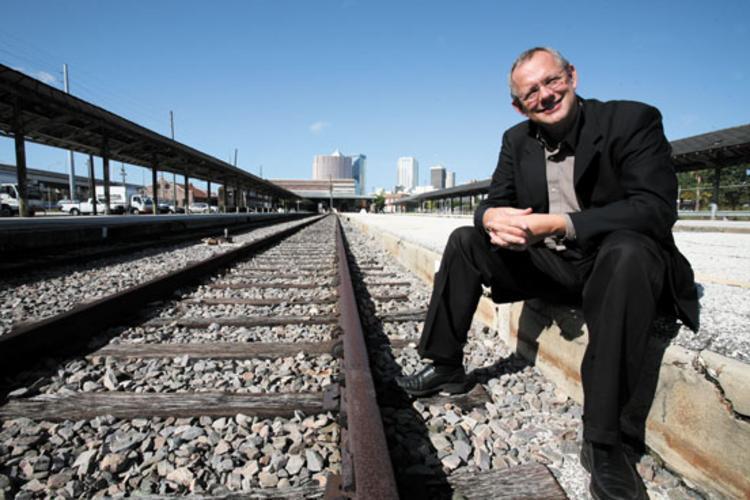 All seven Tampa mayoral candidates shared ideas with business leaders Tuesday at the Five Labs training facility. The Tampa Bay Business Journal hosted a private breakfast and forum and focused on issues that affect the local business community and economy.

Despite its specific content, candidates touched on many of the same issues they’ve been campaigning on including transportation, climate resiliency, economic development and affordable housing.

Candidates stuck to the usual talking points on all of those issues – more transit oriented development, reduce traffic congestion, increase transit access, make affordable housing cheaper and easier to develop. Of course, each candidate reiterated their own ideas on how to make all of those things happen.

But there were some new takeaways.

Some might say he had it coming. Turanchik’s bravado on stage teetered on insulting toward some of the candidates and, in at least one instance, all of them.

When asked how to keep housing in downtown affordable each candidate shared ideas. Topher Morrison, a small business consultant, and philanthropist David Straz each said affordable housing should be a priority throughout the city, not just in downtown. Former Police Chief Jane Castor and Tampa City Councilmember Mike Suarez each shared points about utilizing city-owned land to lower development costs to drive housing prices down. Harry Cohen, also a City Council member, brought up creative solutions like tiny houses and container homes.

Turanchik lambasted every single one of them.

“When I listen to everyone up here it makes me cringe,” Turanchik said.

He then went on to explain how he knew better. Behind him, candidates kept a straight face, but they didn’t stay silent.

Turanchik took shots from Castor, Cohen and Morrison with Morrison offering perhaps the most scorching burn.

“It’s not that there’s not any good ideas Ed,” Morrison said – hissed, almost. “It’s just it doesn’t sound good unless it comes out of your mouth.”

Cohen fired back at Turanchik for criticizing his tiny houses and container housing ideas. Turanchik said low-income people shouldn’t have to live in 300 square-foot homes or storage units.

Most people now know many younger professionals actually quite like the idea.

“I really think you’re not with the times,” Cohen said looking directly at Turanchik.

In another slay, Castor called Turanchik out for what some might see as a touch of hypocrisy. He criticized other candidates for not doing anything to follow through with light rail plans using CSX corridors – plans Turanchik championed in the early 90s. She reminded Turanchik that the plans never moved forward because there wasn’t funding for it, but now there is.

Except, the 1 percent sales tax that could actually fund Turanchik’s rail vision (folks used to call him Choo Choo Turanchik) wouldn’t be available had he had his way. Turanchik voted against the tax – the only mayoral candidate to do so.

Dick Greco Jr.’s plan is to have no plan

Greco hasn’t been on the trail long, so his talking points are relatively fresh compared to the rest of the field of candidates, who have mostly been saying the same thing since last Fall.

But that doesn’t mean they have much substance – a fact that Greco chose intentionally.

“I don’t have a Dick Greco plan that I’m going to cram down your throat,” Greco said answering a question about transportation. “The city of Tampa doesn’t own a bus, HART Line does. We have to have someone who will bring together all of these parties. It’s not the plan, it’s the implementation.”

Greco is instead focusing on concepts, ones that mostly align with his competitors. But to get to the solutions, Greco dismisses the idea of having a named and marketed plan like Turanchik’s “Go Plan” or Morrison’s “Green City Plan” and instead wants to work with all of Tampa’s neighborhoods to establish community plans.

He’s not alone in leaving policy details idle until after the election. Straz’s answer to most policy issues facing the city is to utilize his proposed “Quality of Life Council,” a group he says would meet every Monday in his office at 8 am to discuss any issues that might affect quality of life, which by Straz’s definition, is just about everything.

We still haven’t figured out whether it’s “Tampeño” or “Tampanian,” though, “Tampan” seems to be out.

In a previous debate Morrison and Suarez got into a bit of a verbal altercation over whether or not Morrison was a “Tampeño.” That in turn sparked a debate about whether people from Tampa are called “Tampeños,” “Tampanians” or “Tampans.”

“Tampans” got cut straight away – sounds too much like a female sanitary product, local social media feeds will inform.

But there was a twist in Tuesday’s debate. Where Suarez previously stuck with “Tampeño,” said with a near perfect Cuban pizazz, Morrison went with “Tampanian.”

The two swapped at the TBBJ forum.

So, which is it guys?

Most of the hour and a half long forum was congenial. Candidates cracked jokes and laughed playfully at one another. They shared microphones when it seemed like none but one were working.

But during the heated moments – those when candidates were battering Turanchik, mostly – Castor was the only one to never blink.

Question after question, she stayed out of the limelight. She was a candidate who was skillfully answering questions when they were asked of her, but then nonchalantly faded into the background when fireworks started to fly.

Meanwhile, every other candidate was doing his best to outshine the rest of the men in the race.

Why? Because Castor is probably pretty confidently sitting on the No. 1 throne in this race while the rest of the pack is duking it out for the wild card. They don’t need to beat her, not yet anyway, they just have to beat everyone else.

A candidate would never admit to that level of confidence – it’s campaigning 101 to run every campaign as if it’s a tight race – but if what appeared to be Castor enjoying a comfortable lead is true, it comes with some pretty solid evidence.

A St. Pete Polls survey out the same day as the TBBJ forum put Castor at 45 percent support. Straz was behind her … by more than 30 points. And no other candidate even got into double digits.

That’s where the competition is right now.

Greco said “trickle down,” an automatic bad word for Democrats who are instantly reminded of Ronald Reagan.

Cohen likes Morrison’s urban aerial gondolas and people laughed when he said so, which is the typical response anytime someone suggests them.