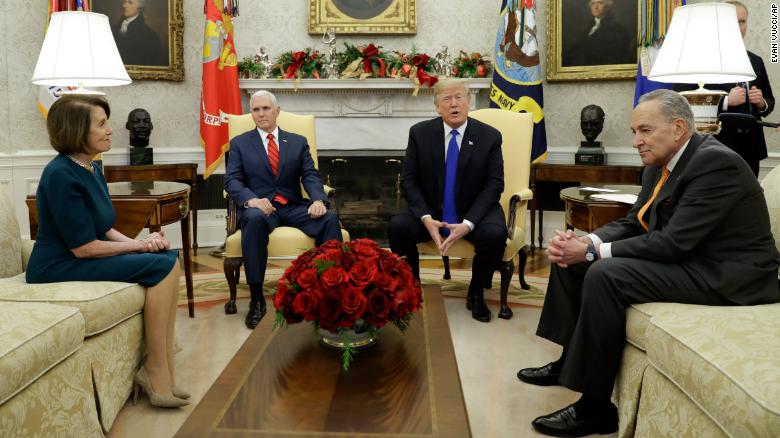 Word of the day: 'Shutdown.' (Image via AP Photo/Evan Vucci)

New polling data from the Florida Atlantic University Business and Economics Polling Initiative (FAU BEPI) shows Floridians, much like the rest of the country, aren’t too thrilled with current party leadership in Washington, D.C.

Trump’s minus-5 approval is just slightly worse than Democratic House Speaker Nancy Pelosi, who earned a minus-4 approval rating. Only 40 percent of voters approve of Pelosi’s work as Speaker, while 44 percent disapprove and 16 percent are unsure.

The poll was conducted from Feb. 7-9 and has a margin of error of plus or minus 4.3 percentage points. A total of 500 registered voters from Florida were surveyed in the sample.

Trump and Pelosi went head-to-head for weeks over Trump’s demand for border funding, resulting in the longest government shutdown in U.S. history. Many government workers missed multiple paychecks as a result of the breakdown.

Reports late Monday night showed lawmakers have agreed to a potential package on border funding. It’s not clear yet whether the President would sign that legislation by Friday’s deadline to avoid another shutdown.

The protracted battle doesn’t seem to have helped the views of either party leader in the eyes of Floridians. That’s clearest when it comes to Trump, whose net approval is down 8 percentage points from the last version of the poll from the FAU BEPI.

However, Trump’s minus-5 approval rating isn’t close to the lowest captured by the survey, with previous polls showing Trump faring worse.