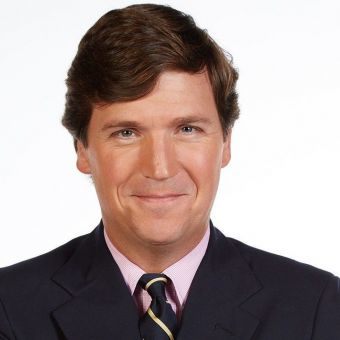 Tucker Carlson has made a career out of firing insults and excrement from his pie hole, and it certainly pays well. Enough people tune in to watch Tucker Carlson Tonight on Fox News that he earns a reported $4 million salary.

He wants the image of a tough guy who stands up to the godless liberals out to destroy America, and a lot of people are content to buy that. Not me. He’s nothing more than a well-compensated bully who figured a way to stand out in the crowd of TV screamers.

He gets more viewers by using his national platform to mock and humiliate people who think differently. He calls it candor, and here’s one of many examples. Fourteen advertisers pulled their spots from his show in December after Carlson said immigration makes the U.S. “poorer, dirtier, and more divided.”

But it really hit the fan after Media Matters released transcripts and tapes of radio segments dating from 2006-2011. They detailed banter between Carlson and Tampa shock jock Bubba The Love Sponge and surely you know the story by now.

I mean, sheesh. Bubba was involved, so there was a pretty good chance it would be raunchy, and it was.

Carlson called some women “extremely primitive” and others “whores” or “pigs.” He also defended the actions of convicted child sex offender Warren Jeffs, which prompted a rebuke from Bubba.

Think about that for a second. When Bubba says dude, you went too far there, wow.

Twitter melted down, which was predictable, and I’m sure Carlson loved every bit of that. And he loved even more that it gave him a chance to double down on the loathed left that doesn’t find his type of candor acceptable. 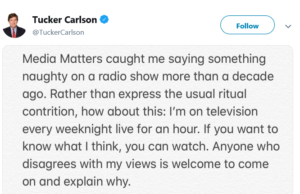 “Since the day we went on the air, they’ve been working hard to kill this show. We haven’t said much about it in public; it seemed too self- referential. The point of this show has never been us,” he said after the controversy broke.

“But now, it’s obvious to everybody. There is no pretending that it is not happening. It is happening, and so, going forward, we’ll be covering their efforts to make us be quiet.“

Catch the smokescreen there?

Nowhere in his self-righteous, snow-flakey anger is there a hint that he doesn’t feel the same now as he did during those Bubba sessions. Didn’t that possibility ever cross the minds of those who rushed to defend Carlson?

That group, by the way, includes Donald Trump Jr.

“This is how to handle the outrage mob,” he tweeted. “Remember, even the most sincere apology means nothing to them. They want to break and ruin you. That’s their end goal.”

Other Carlson defenders called the original story a “hit piece” and a coordinated attack by the “outrage machine” that demands conformity of thought. They’ve said everything except that his remarks were reprehensible.

All the arguments making Carlson out to be the victim are crap.

Decrying thought control is fine when talking about taxes, the national debt, gun control, and even building a border wall.

But that’s not what is happening here.

Carlson painted himself as the victim and built a false narrative that anything he says, no matter how personally insulting or crude, is in-bounds. Those offended are the real losers because, like Jack Nicholson once said in the movies, they can’t handle the truth.

Neither can Tucker Carlson, and it’s not that complicated.

He hasn’t said his comments to Bubba were inappropriate at best, so I have to assume he thinks the same way now as he did then. And if that’s his attitude, why would anyone support him?

That is the real truth here.