Breaking: Randy Maggard is winning the GOP primary special election in HD 38, the seat vacated by Danny Burgess. For full election results, be sure to check FloridaPolitics.com.

Good Tuesday evening. We veer from strictly legislative goings-on for good cause. Of course, Sunburn readers knew this was in the works as far back as March 26, but Gov. Ron DeSantis made it official Tuesday: the next Florida Cabinet meeting will happen in the Holy Land. DeSantis announced the Israel meeting during an appearance at Temple Kol Ami Emanu-El in Plantation. DeSantis said a weeklong trade mission will begin May 25. The sojourn will be DeSantis’ first official trip abroad since he was sworn in this January. “I think it’s a really unprecedented effort to strengthen the ties between Florida and Israel,” he said. Sixty Days is packing its bags — assuming we end on time. Here’s your nightly rundown.

‘Bad science’ wins: A measure to limit one of the main active ingredients in smokable medical marijuana is headed to the House floor.

Criminal justice reform: A Senate bill that would increase felony theft limits for the first time in over three decades cleared its last committee.

Dead again: A red light camera ban again fizzled in the Legislature, as it has for years.

‘Hold her accountable’: Rep. Randy Fine calls on Senate Democrats to repudiate Leader Audrey Gibson over her comments on his anti-Semitism bill.

Stay away from my genes: A bill moving through the Senate would block DNA testing companies such as 23andMe from selling customers’ genetic info.

No more ‘butcher shops’: A bill to tighten restrictions on cosmetic surgery centers is on its way to its final House committee.

“You can have a seat … Sit down. You’re done. You’re done … Personal insults are not going to be tolerated here, folks. I don’t care what side you’re on.” — Rep. Travis Cummings, chair of the Appropriations Committee, responding to a CBD shop operator who was criticizing Rep. Cary Pigman for walking out during his testimony on a bill capping THC in smokable marijuana at 10 percent.

Which Florida Governor was the first to ride in an automobile during his inaugural parade?

Last time, we asked: Where are Florida’s famous sponge docks?

Congrats to Geoffrey Becker (@geoffreyb89) who was the first to tweet the correct answer! 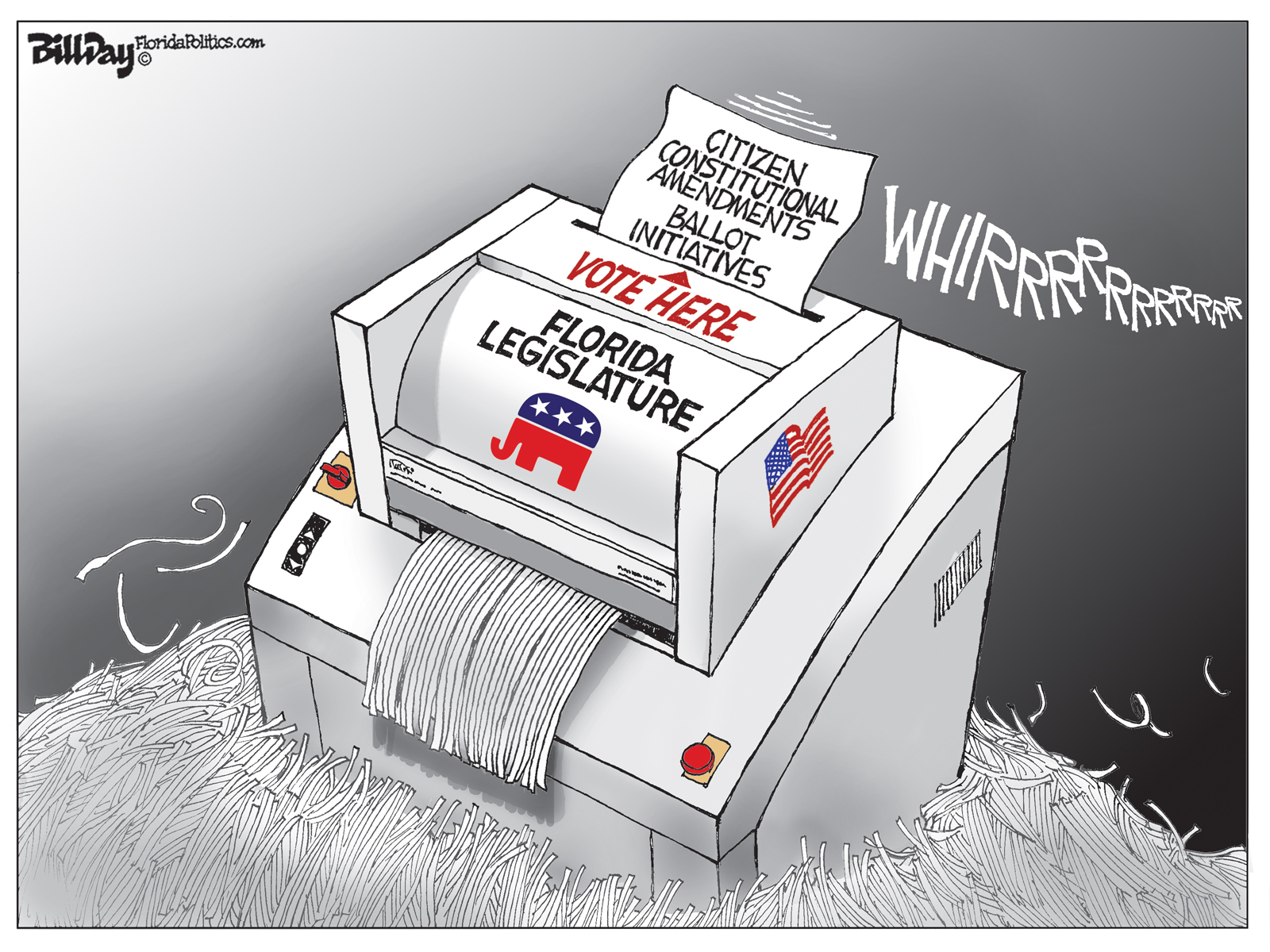 DeSantis announced Tuesday that he will be leading a cross-section of leaders to Israel in May for his administration’s first business development mission. Shortly after announcing the plan, DeSantis took friendly questions about the trip from a rabbi in South Florida. (Responses have been edited for clarity and brevity.)

Q: What do you hope to accomplish in Israel?

DeSantis: We have a lot of opportunities by strengthening the relationship between Florida and Israel. One is increasing tourism from Israel to here. We already have that teed up with flights into Central Florida. I want to build off that and make sure people can go direct to and from Israel to different places in Florida. Miami, Orlando.

In terms of investment, we want to drive investment into Florida from Israeli companies. There are a host of things that they’re doing over there that are really cutting edge. We want to be a part of that. With our universities, partnering with Israeli researchers. Water quality was mentioned earlier. We’re doing a lot at the state level, record funding this year. But if you look at what Israel has been able to do. They made the desert bloom over there. I want to have relationships between a number of universities because I think that will put us in a position to tackle some of these problems.

Q: What prompted your actions against Airbnb?

DeSantis: After the election, I started reading about how Airbnb has delisted all Jewish-owned properties in the West Bank. I’m thinking like, “OK, why?” They claimed it was because of a disputed territory policy. But it only applied to Jews; it didn’t apply to anybody else. To me, that was a pretty obvious example of a company running afoul to our anti-BDS rules. So we decided to take action. We had our State Board of Administration look at it. They obviously recommended that it violated the law. So we proceeded with that.

DeSantis: I’ve been able to see almost everything really. Not just in Jerusalem and surrounding areas. We’ve been to Hebron. We’ve been to Shiloh, a lot of places. So we want to provide many the opportunity to do that. When I first came to Israel, I was representing a district in Congress that contained St. Augustine, which was coming up on its 450th anniversary of continuous existence … The oldest city in the United States. … You go to Israel, 450 years is like nothing. We’re walking around the ruins of Shiloh and I’m picking up stuff and asking the guy, “Hey, what’s this?” He’s like, “Eh, Byzantine Empire.”

Tuesday was FSU Day and Wednesday is Gator Day, wrapping up a one-two punch of Capitol visits from the state’s most prominent universities — or a two-one punch depending where you stand.

Gator Day kicks off at 7:30 a.m. with a breakfast at the Governor’s Club attended by UF President Kent Fuchs. He and students will walk the halls meeting with legislators before an 11:30 a.m. UF Alumni Association Luncheon.

Students are also set to meet with Cabinet members and agency heads, including Attorney General Ashley Moody and Agriculture Commissioner Nikki Fried, both of whom are triple Gators. A Florida Blue Key networking event will be held at Andrew’s starting at 4:30 p.m. followed by a Florida Blue Key Alumni Association reception at 6 p.m.

While Gator Day is only one day on the Capitol calendar, it’s every day for several lobbyists. Among the many advocates lobbying for UF are Brian Ballard and Monica Rodriguez of Ballard Partners; Matt Bryan, Daniel David, Lisa Hurley, Jeff Hartley, Thomas Griffin and Teye Reeves of Smith Bryan & Myers; and David Childs and Eileen Stuart, of Hopping Green & Sams. 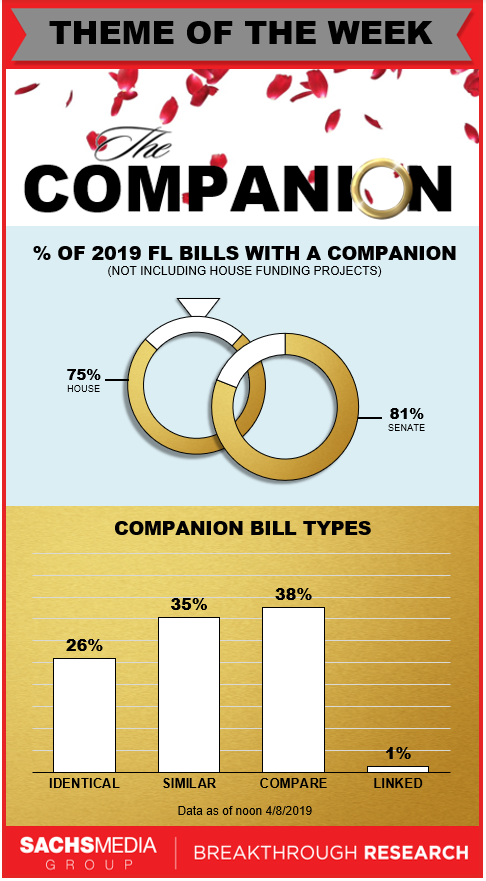 The Marjory Stoneman Douglas High School Public Safety Commission, which was created by the Legislature last year after the mass shooting at the Parkland school, will continue a two-day meeting in Broward County. That’s at 8:30 a.m., BB&T Center, Chairman’s Club, 1 Panther Parkway, Sunrise.

More than 100 long-term care professionals and advocates will rally in support of continued Medicaid funding for the state’s nursing homes. That’s at 9:15 a.m., Capitol courtyard.

The Senate Military and Veterans Affairs and Space Committee will consider a resolution that calls for a continued moratorium on oil drilling in the eastern Gulf of Mexico to help prevent conflicts with military training. That’s at 10 a.m., 37 Senate Office Building.

The Senate Rules Committee will take up a proposal to abolish the Florida Constitution Revision Commission. The 37-member commission meets every 20 years and has a unique power to place proposed constitutional amendments on the ballot. But it drew criticism last year, in part, because it “bundled” unrelated issues into single constitutional amendments. That’s at 10 a.m., 110 Senate Office Building.

The League of Women Voters of Florida and partner organizations will hold a news conference to oppose several bills, including measures to restrict felons from registering to vote. That’s at 11:30 a.m., Old Capitol steps, east side.

Members of “Our Neighborhoods,” a coalition of Florida child safety advocates, homeowners, parents and homeowner association presidents, will hold a news conference against state pre-emption of the “rights of local governments to regulate the growing number of short-term (vacation) rentals.” That’s at 12:30 p.m., 4th floor Rotunda.

The Florida House will hold a floor session and take up numerous issues, including a battle over the controversial insurance practice known as assignment of benefits and several health care bills, including one that seeks to clear the way for importing cheaper prescription drugs from Canada. That’s at 1:30 p.m., House Chamber.

The Senate Education Committee will take up a proposal that seeks to impose eight-year term limits on county school board members. The measure is a proposed constitutional amendment that would ask voters in 2020 to approve the term limits. That’s at 1:30 p.m., 412 Knott Building.

The Senate Governmental Oversight and Accountability Committee will consider a bill that calls for the state to draw up a plan for a strategic fuel reserve to help deal with hurricanes and other disasters. That’s at 1:30 p.m., 301 Senate Office Building.

The Senate Innovation, Industry and Technology Committee will take up a proposal that would give the state regulatory authority over vacation rental properties, pre-empting local regulation. That’s at 1:30 p.m., 110 Senate Office Building.

The Florida Senate is scheduled to hold a floor session and take up several measures, including one that would save VISIT FLORIDA, the state’s public-private tourism marketing agency, from repeal and disbanding Oct. 1. That’s at 4 p.m., Senate Chamber.