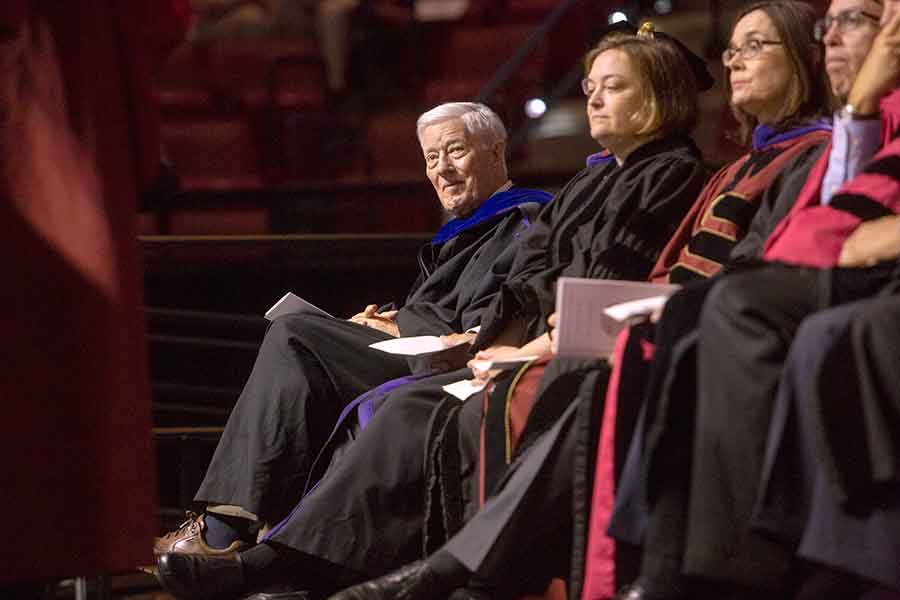 "He left a lasting legacy."

With the death of legal legend and past Florida State president Sandy D’Alemberte, those who knew him reflected Tuesday on his contributions to the community and his effect on the lives around him.

“I’ve known Sandy for more than 40 years. He’s been a friend, a mentor and an inspiration to me. He was a person of great integrity with an abiding sense of social justice who made a difference in people’s lives here and around the world through his defense of the First Amendment and advocacy of human rights. He loved Florida State University and left a lasting legacy through his dedication to academic excellence and research, diversity, campus beautification and historic preservation, and support for the arts and culture. I will miss him dearly.”

“I was so lucky in so many ways to have Sandy in my life — he was my dean at FSU Law, my teacher, and my friend. Sandy had a great influence not only on Florida but also our nation. As a teacher, Sandy was soft spoken and self-deprecating. As a lawyer, he was brilliant and fierce. Sandy’s passing is a huge loss, for his family, for Florida, for his colleagues, for me and all his many students. He was a great man — and great men are never forgotten.”

Daniel Uhlfelder, Santa Rosa Beach real estate attorney and son of Steven Uhlfelder, chair of the former Board of Regents and D’Alemberte’s friend:

“He was the best and touched my life to this day … In 1989, when I was in high school, Sandy was dean of FSU’s law school and Bill Clinton gave the commencement address. My dad, Sandy, Clinton and I had dinner (I was only 16), and afterwards, Clinton said he wanted to go out and see the town, so my dad and I took him around. Lo and behold, we went to Andrew’s and Clinton played saxophone (I went home because I had school the next day). Sandy was always exposing my family and me to interesting and influential people even when I was just a kid. I still communicated with him regularly. Just a few months ago we were discussing the beach access law that we are dealing with over here, sharing ideas and thoughts. He always took my calls and emails offering me advice or counsel when I knew he was the only lawyer who could answer my questions.”

“I am profoundly saddened by Sandy’s death on a personal and professional level. Sandy was a visionary leader who brought sunshine to our state’s judicial, political, and educational landscape. Justice was the North Star that guided Sandy through every station of his life. The pursuit of justice influenced his life’s work … not to mention, we owe a debt to Sandy for his leadership as a central architect in the construction of the constitutional framework for governance in today’s Florida. Sandy was a personal mentor to me, hiring me in 1984 as a legal research and writing instructor at the FSU College of Law. I know firsthand the positive influence he has had on countless students. Sandy had the awe-inspiring ability to make every project, institution, or initiative better, just by bringing his time or talent to it … He tackled every challenge placed before him like the true gentleman he was: With honor, strength, and dignity.”

Damien Filer of Progress Florida on behalf of the Florida Access to Justice Project:

“We are honored to join the loud chorus of Floridians who today are paying their respects to Sandy D’Alemberte, a great public servant. Our society is more just and the public good better served because of the life and career of this great Floridian.”

“Sandy was a voice for reason, the rule of law, decency and kindness – a ‘necessary man’ for all his time and certainly for these times … Sandy was indispensable in so many instances in Florida’s history – both the big moments and some moments that most of his fellow Floridians might never know about but which were just as grand. One of the latter was his embrace of Jose Godinez-Samperio and his fight to be admitted to the Florida Bar. Jose graduated valedictorian of his class at Armwood High School in Hillsborough County and went on to attend FSU College of Law. Jose made history when he graduated from FSU College of Law and passed the Florida Bar exam, but when he sought admittance to the Florida Bar as an undocumented immigrant, this great American Story almost came to an end. Sandy’s belief in the law, fair play and young people caused him to take on this injustice. He brought together a team, including me, past presidents of the ABA, bipartisan members of the Florida Legislature and others, to successfully confront this quiet individual inequity just as he had taken on more large and public challenges for all of Florida.”