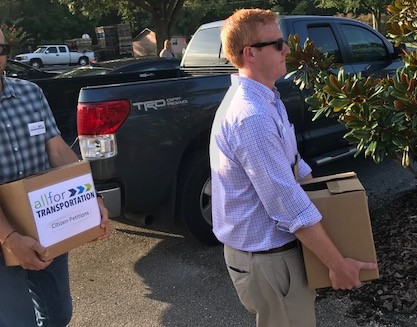 It's so far unclear how funds will be allocated.

The All For Transportation Group behind Hillsborough County’s voter-approved 1 percent sales tax for transportation and transit improvements is celebrating a judge’s ruling upholding the tax.

But provisions removing certain spending allocations and Independent Oversight Committee authority to cancel spending plans that don’t meet guidelines under the charter leave questions about how funds will now be allocated.

The biggest issue will be whether or not the county and cities will now be able to allocate out-sized funds for new roads and vehicle capacity projects.

Such projects were originally blocked under the charter amendment, but Hillsborough Circuit Judge Rex Barbas’ ruling in a lawsuit that strikes that provision, meaning funds can now be spent to widen roads and build new ones.

That’s a provision that was already in the charter, but it contained strict limits and required cities to only use a small portion of discretionary tax revenue on such projects.

The ruling also removes funding allocations for Hillsborough County, the Hillsborough Area Regional Transit Authority and the three cities in the county, meaning there is no longer a set guideline for how much those bodies will receive under the new tax.

She acknowledged she still has a lot to learn about what the latest ruling means and how to move forward. It’s still new and officials are still digesting it. But she’s worried the judge’s ruling waters down the voter-approved All For Transportation Tax and makes it more difficult to ensure spending meets voters’ original intent.

The All For Transportation group that pushed the referendum and defended it in court argues it is now the County Commission’s duty to pass an ordinance that allocates which agency or government gets what and on what projects they can spend it.

Kemp expects a majority of the current Hillsborough County Commission to go along with that plan and thinks they will likely enshrine into county ordinance the provisions in the charter stricken as part of the court ruling. But Kemp is concerned a future board could undo that progress.

“That’s not a permanent fix as far as I can tell. I don’t know that you can bind future commissions to this,” Kemp said.

Kemp is trying to find out whether or not the potential to repeal an ordinance setting spending priorities under the 30-year tax would cause problems for agencies seeking federal or state grants for projects.

“When you apply for federal dollars, the first thing they want to know is that you have a guaranteed source of revenue for operations for 20 years,” Kemp said.

If a future County Commission could undo ordinances guaranteeing revenue, would that leave Hillsborough unable to attract those dollars?

The answer to her question is largely unanswered.

The Hillsborough County attorney’s office declined to comment because, at least technically, the All For Transportation litigation is still pending. HART’s attorney has also not responded to a request for information, but is likely bound by the same prohibition.

The All For Transportation group, however, disagrees with Kemp’s concern.

Those taxes are used to secure bonding and grants, Barker said.

Still, that assumption requires action. Barker and other All For Transportation organizers plan to speak during public comment at the Board of County Commission’s Wednesday meeting.

They will ask commissioners to enshrine into ordinance the requirement that HART receive 45 percent of the new tax revenue with Hillsborough County and its three incorporated cities receiving the amounts previously allocated in the All For Transportation tax charter.

Under the court ruling though, commissioners don’t have to abide by those exact requirements.

“It is a possibility,” Barker said. “But voters voted on this because it was a balanced plan. They voted for it because it was going to touch every neighborhood. The only thing for the County Commission to do is ratify what the voters asked for.”

“This is a victory for All for Transportation and I’m confident the County Commission will do the right thing and restore the full ballot language and uphold the will of the people,” Castor wrote in a statement Monday after Barbas issued his ruling.

“Fifty-seven percent of the voters were very clear in their support of a transportation formula that would support the needs of a best-in-class transportation network,” HART CEO Ben Limmer wrote.

“We look forward to working with the Hillsborough County Board of County Commission to ensure the best use of the transformational investment that will the improve the transit experience for Hillsborough County; our goal is to partner with the BOCC to fulfill the taxpayers vision.”

“I will be making a motion to honor the existing interlocal agreements to ensure the specific allocation of funds is upheld, exactly as described in the charter amendment, and the Commission votes to enshrine and ensure the surtax monies are distributed per the will of the people,” Overman wrote.

previousHillsborough's 'All For Transportation' tax upheld by judge—with some tweaks