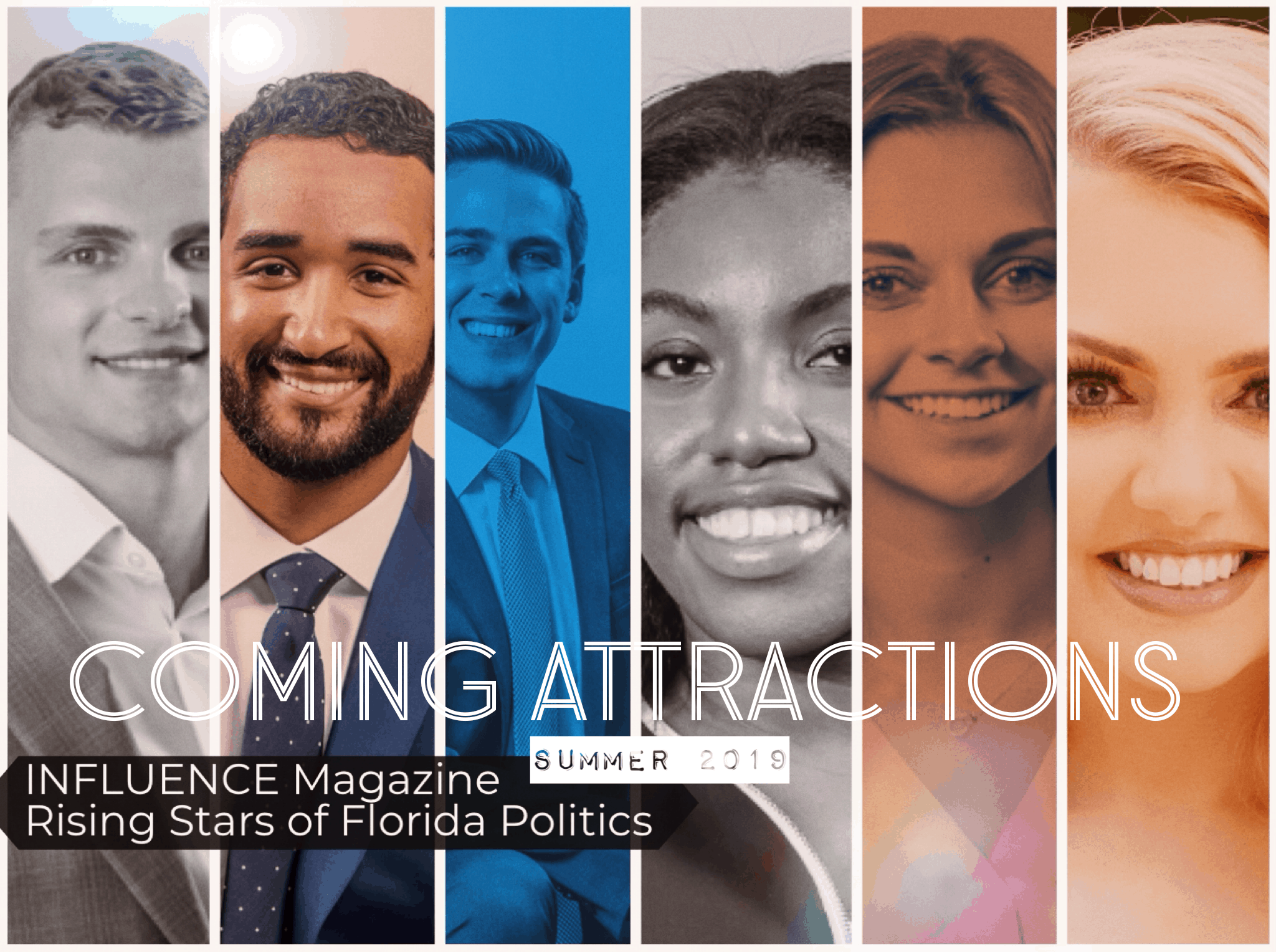 The latest edition of INFLUENCE Magazine invites readers to take a step back and look at the talent. By and large, each segment is an overdue gesture to the names and faces that have kept or continue to keep the political machine oiled and running smoothly.

Our Rising Star cover stories feature fresh, young subjects — aged 30 and under — who’ve already started imprinting a legacy in Florida’s political landscape. At 23 years old, I had the unique responsibility of profiling peers who, in many cases, evoked in me a bit of envy. By highlighting these Rising Stars, we hope to give readers a glimpse of what’s next, if not what’s now. Readers will soon discover, that more than anything else, hustle persists in Florida politics.

The Rising Star designation should come as a surprise to our subjects. We kept the purpose of the interview under wraps. Perhaps that’s why all were at least somewhat reluctant to indulge in themselves. Humility is an admirable trait and its frequency spoke to the characters of our subjects — but it’s a frustrating obstacle for someone tasked with touting another’s accomplishments.

Still, at the end of each interview, I felt acquainted. Some had never spoken on the record to a reporter — no easy task, I’m aware. And I’m sure that, for the most part, it will long be their easiest interaction with someone from the press. I imagine that most of this year’s cohort had not undergone traditional media training, but all spoke with careful deliberation and left little to interpretation. In the industry, we call these “great quotes,” treasured rarities for us scribes trying to make sense of it all. So, kudos — and don’t be afraid to help your bosses out next time a journo comes knocking.

READ THE LATEST EDTION OF INFLUENCE MAGAZINE BY CLICKING HERE.

Writers are told that everyone has a story and I’ve always been skeptical. But our Rising Stars persuaded me otherwise. I like to keep interviews reactive and unscripted, so each Rising Star fielded questions that I’m sure they weren’t expecting but performed nevertheless. Some discussed political losses or victories in depth and I was almost always told that the former were more memorable. Others opened up about personal tragedies and how they bounced back. All credited the folks who’ve helped them along the way. While each brief profile is distinct from the other, woven together this year’s Rising Stars is almost a catalog of glory, grief, conflict and camaraderie.

The summer spotlight also shines on familiars and newcomers, age notwithstanding. Inside INFLUENCE there are in-depth reflections from folks like former Sen. Arthenia Joyner, whose lasting impact on civil rights and the state Senate will not soon be forgotten. The edition also boasts helpful primers, such as interviews with the three — count ‘em — redshirt special election victors who were recently seated in the state House. And while we know Florida’s role in the presidential election can never be understated, reporter Scott Powers’ detailed list of operatives on the move nationally suggests the largest swing state also is a reservoir of expertise for presidential campaigns.

The Political Aficionado’s Guide, our recurring culture accessory in INFLUENCE Magazine, provides readers with books, movies, shows and even travel tips, bringing some color to life outside the office. As well, both Ryan Cohn of Sachs Media and veteran pollster Steve Vancore lend some tools of the trade as our “Insiders.”

It’s my hope that the reader can peel another layer off The Process with each feature. That’s what I found myself doing. I’ve covered two Legislative Sessions and a statewide election. But after writing about each subject and later reading the magazine in full, I understand it would take a lifetime to grasp the mechanics of it all. A car is powered by a combustion engine, sure. But only an expert can dismantle the vehicle, study each part, realize where it fits and what it does, and put it all back together. I encourage readers to focus on the talent — the parts of this machine — and maybe learn something. I know I did.

previousSunburn — The morning read of what’s hot in Florida politics — 8.12.19

nextDeborah Figgs-Sanders has the most cash on hand, but Beth Connor continues fundraising surge