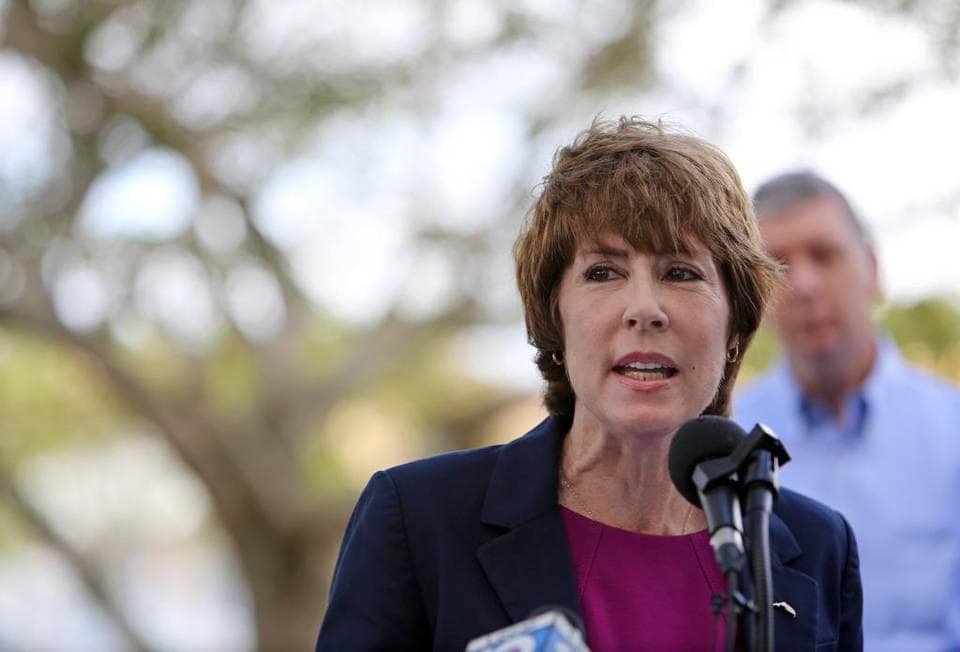 After a series of tweets highly critical of Republican Gov. Ron DeSantis, former U.S. Rep. Gwen Graham was told to step down from her co-chairmanship of the Rebuild 850 organization helping with Hurricane Michael recovery.

“Yesterday, a friend called to tell me that because I have been tough on our new Governor – calling him out on Twitter and Facebook for policies I believe are harmful to Florida – I will no longer continue as co-chair of Rebuild 850,” Graham, a gubernatorial candidate herself last year before she lost in the Democratic primary, stated on Twitter late Monday afternoon.

That friend was Ron Sachs, founder and CEO of Sachs Media Group in Tallahassee, and the one who essentially organized Rebuild 850 last fall. Sachs is a lifelong Democrat who said he voted for Graham last year but found her recent tweets about DeSantis to have been so political, partisan and even personal as to cross the line. He said that he feared it would bring a partisan stain the the organization and its efforts. He said he told her she had to step down to preserve the organization’s nonpartisan efforts.

A spokesperson for DeSantis said late Monday that the Executive Office of the Governor is not at all involved in leadership decisions at Rebuild 850. 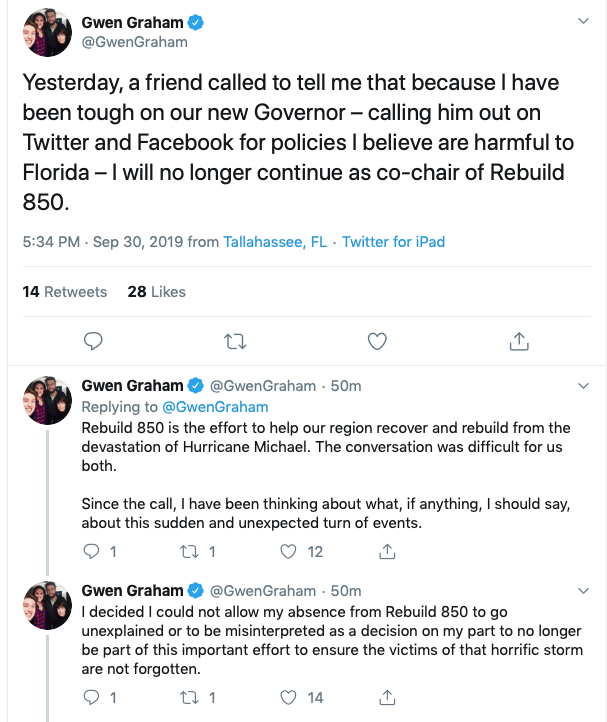 Last fall, with Sachs help, Graham joined former Speakers of the House Allan Bense and Will Weatherford, both Republicans, in a bipartisan triumvirate of Panhandle political heavyweights, leading a nonpartisan effort to keep North Florida’s recovery front and center and to marshal ongoing support.

When Rebuild 850 formed on Nov. 1, 2018, just three weeks after the Category 5 Hurricane Michael demolished the central Panhandle, Bense, Weatherford and Graham were a Dream Team of leadership. Through their direct work within the devastated communities, their connections, public speaking, appearances before various committees of the Florida Legislature and elsewhere, and columns they wrote for media, the trio have helped organize other organizations, and to keep Floridians and others focused on the people of the region, their plight, and their needs

The organization is entirely volunteer and collects no money, but it seeks to direct people to make donations to other relief organizations and to promote business investment in a region that might take a generation to rebuild.

Sachs said it was painful to confront Graham and tell her she must leave the organization, but he thought it was in the best interest of the organization’s efforts after a series of tweets in mid-August and then another last week that he said were both political and partisan and mean-spirited and personal.

“I let her know this had to be done and she said she was upset about it. I said so was I, but there is no other option. I told her we could not let Rebuild 850 be perceived as political,” Sachs said.

Rebuild 850’s website still highlighted her presence as a co-chair, along with Bense and Weatherford, Monday evening. Sachs said Graham surprised them with her Twitter and Facebook posts Monday.

Graham could not be immediately reached for comment after her tweets.

However, she made it clear she’s gone.

“I love the people of North Florida and it has been my privilege to continue to be their advocate through Rebuild 850, as I was while in Washington, D.C.,” she tweeted. “However, if my passion for Florida and my commitment to speaking the truth when this Governor’s policies cause her harm cannot be reconciled with my co-chairmanship of Rebuild 850, then so be it. I consider this extremely unfortunate – but I will not be silenced.

“I will continue to do everything that I can out of love for our state and all my fellow Floridians – together we must Rebuild 850,” she tweeted.

Graham has been a frequent critic of DeSantis and of President Donald Trump. Last week she tweeted, “Do NOT believe the @GovRonDeSantis’ bipartisan spin. He is a mini @realDonaldTrump. To the Floridians (Rs, Ds, Is) who have said, ‘He isn’t as bad as I thought he would be.’ I say, ‘No, he is worse.’ Pay attention, Florida. Actions speak louder than words.”

She is also a strong supporter of Democratic presidential candidate Joe Biden.

She also made it clear that she intends to continue to do all she could to help the region recover from the hurricane.

“Regardless of any position with any group, my commitment to the people of North Florida who are still suffering remains strong and unwavering. Next week is the one-year anniversary of Michael’s destructive path through communities I was honored to represent in Congress,” she wrote.

Graham hinted at the Rebuild 850 departure and her frustration earlier Monday when she tweeted and posted on Facebook that she had a “tough day” Sunday and that her husband, Stephen Hurm, surprised her Monday with flowers. ” Steve Hurm for the win. I love you, Sweetheart,” she wrote.