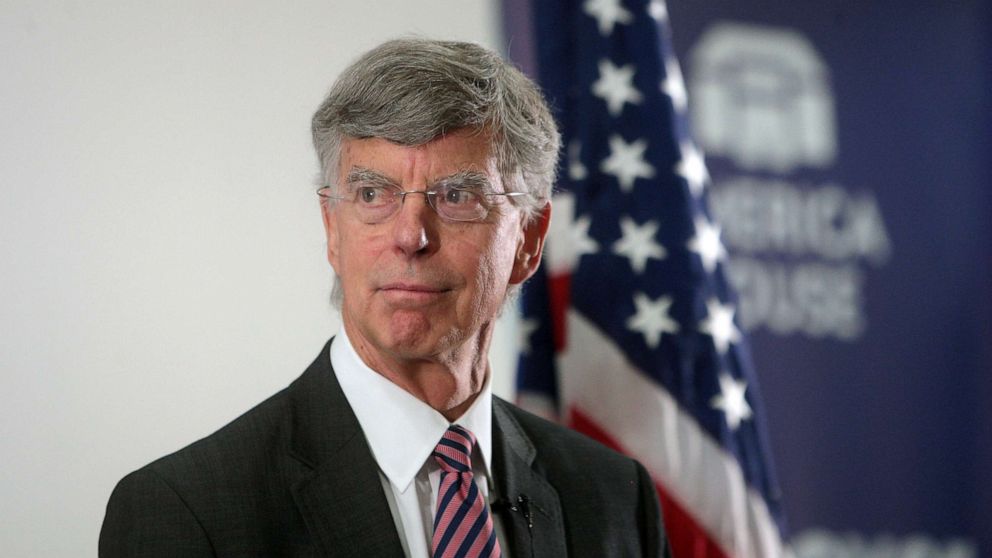 The diplomat took notes. Then he told a story.

A secret cable. A disembodied voice. A coded threat.

William Taylor, a career diplomat, went behind closed doors in the basement of the Capitol on Tuesday and told a tale to the U.S. House of Representatives committees holding an impeachment inquiry that added up to the ultimate oxymoron — a 10-hour bureaucratic thriller.

His plot devices were not cloak and dagger, but memos, text messages — and detailed notes.

His testimony was laden with precision — names, dates, places, policy statements and diplomatic nuance, not typically the stuff of intrigue. But from the moment Taylor revealed that his wife and his mentor had given him conflicting advice on whether he should even get involved, the drama began to unfold.

Their counsel split like this: Wife: no way. Mentor: do it.

The mentor won out — or the story would have ended there.

Instead, on June 17, Taylor, a West Point graduate, Vietnam veteran and tenured foreign service officer, arrived in Ukraine’s capital of Kyiv as the chief of mission. He had been recalled to service after the U.S. ambassador to Ukraine had been forced out. That alone offered foreshadowing of troubles to come.

And, soon enough, Taylor said in his written opening statement, he discovered “a weird combination of encouraging, confusing and ultimately alarming circumstances.”

The story Taylor related from there amounted to a detailed, almost prosecutorial, rejoinder to White House efforts to frame President Donald Trump’s actions in Ukraine as perfectly normal and unworthy of an impeachment investigation. With each documented conversation, he made it harder for the president to press his argument that there was no quid pro quo in which he held up military aid to advance his political interests.

Over three months, Taylor told legislators, he fought his way through a maze of diplomatic channels and rival backchannels as he tried to unravel the story behind the mysterious hold-up of $400 million in U.S. military aid that Ukraine desperately needed in order to defend itself against the Russians.

First came mixed signals about whether Trump would follow through on his promise to invite Ukraine’s new president, Volodymyr Zelenskiy, to meet with him in the Oval Office.

Taylor was told by other U.S. diplomats that Trump needed “to hear from” Zelenskiy before the meeting would be scheduled. And that Zelenskiy needed to make clear he was not standing in the way of “investigations.”

Next, Taylor wrote, there was “something odd:” Gordon Sondland, a Trump ally and U.S. ambassador to the European Union, “wanted to make sure no one was transcribing or monitoring” a June 28 call that the diplomats made to Zelenskiy.

Soon enough, Taylor was detecting that Zelenskiy’s hopes of snagging the coveted Oval Office meeting were contingent on the Ukrainian leader agreeing to investigate Democrats in the 2016 election and to look into a Ukrainian company linked to the family of Trump political foe Joe Biden.

“It was clear that this condition was driven by the irregular policy channel I had come to understand was guided by Mr. Giuliani,” Taylor said, referring to Rudy Giuliani, the former New York City mayor and Trump lawyer who was involving himself in Ukrainian affairs.

The dueling channels of communication were highly unusual.

Then things got more strange:

Toward the end of a routine July 18 video conference with National Security Council officials in Washington, “a voice on the call” from an unknown person who was off-screen announced that the Office of Management and Budget would not approve any more U.S. security aid to Ukraine “until further notice.”

“I and others sat in astonishment,” Taylor recounted.

From there, Taylor made his way through a confusing web of conversations, text messages, cables and other contacts trying to figure out why this was happening.

His diplomatic parrying was punctuated by a detour to the front lines of the Russia-Ukraine fighting in northern Donbas, where Taylor witnessed firsthand “the armed and hostile Russia-led forces on the other side of the damaged bridge across the line of contact.”

That frozen military aid was no mere abstraction.

The diplomat was so troubled that he requested a private meeting with John Bolton when the national security adviser visited Kyiv in late August.

Bolton’s counsel to Taylor: Send a “first-person cable” to Secretary of State Mike Pompeo laying out his concerns. Taylor took the advice and sent a secret cable describing the “folly” of withholding assistance.

He got no specific response.

He still couldn’t explain to the Ukrainians why they weren’t getting their aid.

And time was running out: If the assistance wasn’t delivered by Sept. 30, the end of the government’s fiscal year, it would vanish.

In early September, the puzzle pieces began to fit together.

It wasn’t just the Oval Office meeting that was contingent on Zelenskiy investigating Democrats, Taylor learned, it was the military aid.

Taylor said Sondland told him that if Zelenskiy didn’t publicly announce the investigations, there would a “stalemate.”

He took “stalemate” to be code for holding up the assistance.

“I think it’s crazy to withhold security assistance for help with a political campaign,” he wrote to Sondland.

Sondland waited five hours to respond with a clinical denial of any such contingency: “The President has been crystal clear no quid pro quo’s of any kind.” He reportedly talked to Trump before he sent the response.

But, at last, on Sept. 11, Taylor got word that the hold on releasing the money had been lifted and the security assistance would be provided.

Taylor summed up his tale as “a rancorous story about whistleblowers, Mr. Giuliani, side channels, quid pro quos, corruption, and interference in elections.”

Democrats found it riveting, with U.S. Rep. Raja Krishnamoorthi of Illinois describing Taylor as “like a witness out of central casting.”

White House press secretary Stephanie Grisham, though, dismissed it as part of a “coordinated smear campaign from far-left lawmakers and radical unelected bureaucrats waging war on the Constitution.”

In the end, Taylor said he wished he could have told a different story altogether — a “positive, bipartisan one” about a “young nation, struggling to break free of its past.”

previousSunburn — The morning read of what’s hot in Florida politics — 10.23.19