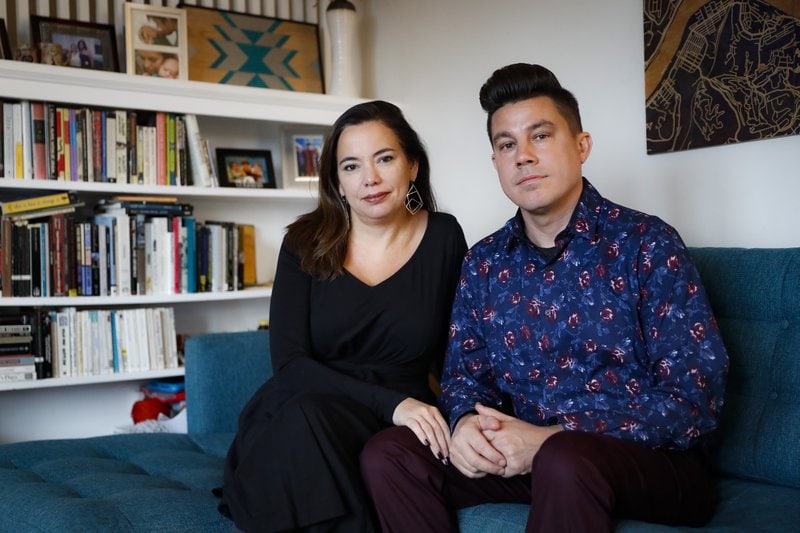 Americans are deeply split on a looming historic impeachment.

Some people heading to Thanksgiving gatherings predict it’s not just the turkey that will get roasted.

Already polarized over Republican Donald Trump’s presidency, Americans are deeply split on a looming historic impeachment. Many families reflect the nation’s divisions, setting up heated holiday debates in households with a taste for politics.

Bryan Wright, of Cincinnati, said “impeachment will definitely come up” as a divisive topic at his extended family’s holiday meal. With a family representing a range of viewpoints including Trump supporters, he and his mother have been texting about the impeachment debate they expect.

“We would openly talk about that … but we have different ways of coming at it,” he said.

Wright is a longtime advocate of welcoming immigrants and helps lead Cincinnati’s efforts, something that relatives who support Trump’s push for a border wall with Mexico chalk up to his “liberal brainwashing,” he said.

Wright — whose wife, University of Cincinnati psychology professor Farrah Jacquez, is of Mexican descent — will gather with her family and his relatives at his parents’ home in Florence, Kentucky, after hosting two recent Thanksgivings.

That included 2016, right after Trump’s hard-fought election, when there was family drama over whether Trump-backing relatives from Tennessee would be willing to come to his house. They did but some voiced “some pretty awful views on immigrants and immigration,” he said.

Alex Triantafilou, an attorney and chairman of Hamilton County’s Republican Party, also expects impeachment to be on the table at the holiday feast hosted by an older brother. While the swing state of Ohio has been trending Republican, Democrats have turned the GOP tide in his county.

Triantafilou, who is critical of the Democratic-led impeachment proceedings, said that his family backs Trump for the most part but that more viewpoints have been added as it has grown with new in-laws and friends.

“If somebody comes in and they’re not on the Trump train, so to speak, they get a little bit of an airing,” he said, adding that it’s “usually in fun.”

But sometimes it goes past fun.

Wright recalls Thanksgivings with offensive comments that strained relations. Mindy Nagel, a physical therapist with liberal views, has unfriended her conservative brother on Facebook over his political posts and said she’ll be “surrounded” by people who disagree with her politically at her in-laws’ Thanksgiving.

“Politics is the elephant in the room,” she said. Her hosts will probably turn off conservative Fox News while she’s there, Nagel said, but there will likely be someone who “tries to stir the pot” by raising Trump and impeachment with her.

Elaine Swann, a Los Angeles-based etiquette coach, advises hosts to have a plan to deal with polarizing discussions amid “all this talk about impeachment” in the air, along with the aromas of oyster dressing and freshly baked pumpkin pies.

“I do think it’s healthy for people to express themselves and to have those conversations,” said Swann, who will host her family’s Thanksgiving. “My advice is to take a route to allow some sort of platform, but with guidelines.”

One tactic: sequester the debates. She’ll have a room away from the dining table stocked with snacks for people who want to talk politics. She also suggests designating a calm family member as a combination moderator-peacekeeper.

Triantafilou, a former judge, said that role often falls to him, although he wouldn’t mind taking a break from politics for the day.

“My preference would be to not have the conversations at Thanksgiving,” he said. “I’d rather watch football and leave politics behind.”

Swann, who will host around 30 people, said that if guests start tearing into one another like drumsticks, “make sure that in your arsenal as a host you have some family-building activity to get everybody out of it.”

Games can be a good diversion or, Swann suggested, invite people to bring family photos to share that will stir warm memories.

If the debate starts getting out of hand Thursday, Wright said, someone will probably defuse things by asking: “How about those Bengals?”

The bottom line, Swann said, is cherishing the time together.

“Although we may not agree politically, the one thing we are is family,” she said. “The big takeaway that I encourage everyone to have is that love for family, because tomorrow is not promised to us, and you never know who is going to wake up the next day and who is not.”

Wright will miss his uncle Tom Burnside, who died in 2018 after years of helping lead spirited discussions of politics “and B.S.” that would go on into the wee hours. He and his pro-Trump uncle were on opposite ends of most political debates but would hear each other out.

“No one’s hearts and minds were changed in these conversations,” Wright said with a chuckle.

But Burnside knew how to get the final word: he’d leave behind pro-Trump mugs he sneaked into the cupboards of family critics.

nextCatherine Durkin Robinson: The season comes to try to get along