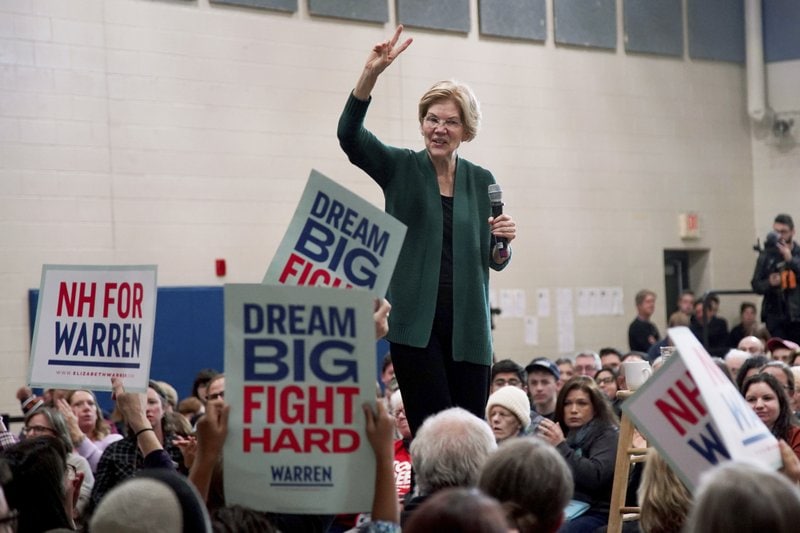 “I think there’s no doubt that the center approach is getting another look right now."

After a Democratic Party fundraiser in Boston on Thursday night, Warren blasted Pete Buttigieg, who is emerging as a leading moderate candidate in the leadoff Iowa caucuses set for Feb. 3. She criticized the South Bend, Indiana, Mayor for holding closed-door fundraisers with big donors.

“I think that Mayor Pete should open up the doors so that anyone can come in and report on what’s being said,” Warren said. “Those doors shouldn’t be closed, and no one should be left to wonder what kind of promises are being made to the people that then pony up big bucks to be in the room.”

Like Warren, Buttigieg has spent much of the past year presenting himself as someone uninterested in political squabbling. But that didn’t stop his senior adviser, Lis Smith, from chiding Warren for not being forthcoming about her past legal work representing corporate clients.

“If @ewarren wants to have a debate about transparency, she can start by opening up the doors to the decades of tax returns she’s hiding from her work as a corporate lawyer — often defending the types of corporate bad actors she now denounces,” Smith tweeted.

Warren responded by suggesting to reporters in New Hampshire on Friday that Buttigieg was trying to “deflect” the issue, adding, “But he’s going to be in New York next week, and he’s going to do three big fundraisers with rich people.”

While testy exchanges are to be expected with voting now looming, this one reflects the deep divides over the Democratic Party’s philosophical direction. The progressive populism that helped fuel Warren’s rise over the summer has become something of a liability as moderates including Buttigieg and former Vice President Joe Biden question the feasibility of her approach — and find voters are receptive to that skepticism.

“I think there’s no doubt that the center approach is getting another look right now,” said Mitch Landrieu, a former Mayor of New Orleans who was once mentioned as a possible 2020 contender and believes the country wants a “transition” away from President Donald Trump rather than a full political “transformation.”

The latter is exactly what Warren has been pitching voters for the better part of the past year, championing a wealth tax, a “Medicare for All” plan giving government-sponsored health care to every American and canceling trillions in college debt. Those issues dominated the primary for months but are now starting to be edged out by questions about whether a more practical approach will be needed to topple Trump in the general election.

Biden is aggressively pitching a more pragmatic center-left agenda, emphasizing his decades in the Senate.

“The Medicare for All option may be a nice idea, but it is very, very, very difficult to get done,” Biden said this week in Iowa. “I don’t think the bulk of the enthusiasm of the Democratic Party is for Medicare for All.”

Billionaire Michael Bloomberg, the former New York City Mayor, has joined the race betting he also can be a more-moderate alternative — and Warren has similarly critiqued him. Appearing this week on his own network, Bloomberg TV, Warren said of the ex-Mayor: “I don’t think, as a Democratic Party, that we should say that the only way you’re going to get elected, the only way you’re going to be our nominee, is either if you are a billionaire or if you’re sucking up to billionaires.”

Warren’s polls began to stall in late October, when she announced plans to spend $20.5 trillion over a decade to implement Medicare for All but then unveiled a more gradual “transition plan.” The senator said that she’d push to get the full proposal through Congress by the end of her third year as president and, in the meantime, use existing, public insurance options to expand health care coverage.

Some saw that as too similar to “public option” plans being championed by Biden and Buttigieg, who argue that candidates backing Medicare for All will spook general election voters who aren’t ready to fully scrap their private, usually employer-based health insurance plans.

Kevin A. Nathan, a 48-year-old cybersecurity administrator who attended a recent Warren event in Raleigh, North Carolina, said Warren may need a “strong undercard” in her choice of running mate — should she be the Democratic nominee — to reassure those afraid she’s too liberal to beat Trump.

“I think if people took time to dive into her policies rather than let others tell them about who she is she’d be electable,” Nathan said.

The race’s other leading progressive voice belongs to Vermont Sen. Bernie Sanders, who has remained among its front-runners despite having a heart attack — even when it looked like Warren might run away with the most liberal wing of the party over the summer.

Sanders has lately reminded voters that he plans to send a Medicare for All bill to Congress during his first week as president — drawing a stark contrast with Warren over a progressive issue on which the pair otherwise agree and countering the notion that the primary will come down to a center-against- left dogfight.

“There’s a corporate wing of the party who are desperate to hold onto power,” said Jeff Weaver, Sanders’ chief strategist. “It’s not moderate vs. liberal or progressive vs. moderate. It’s progressive vs. corporate, and progressive is going to win.”

Warren’s campaign spent only about $520,000 on TV advertising in Iowa through mid-November but says it has reserved $4.7 million worth of television airtime there and in the states that vote next: New Hampshire, Nevada and South Carolina in January and February. Her backers note that none of the candidates bunched near the top of the polls has begun pulling away — meaning there’s still time to make up ground.

“Fundamentally, most Democratic primary voters are progressive,” said Adam Green, a leading liberal activist and Warren ally. “They want someone with big ideas, and they also want to defeat Trump.”

Green said Warren getting months of attacks has frightened primary voters and affected her polling — but that it won’t last as candidates including Buttigieg face the added scrutiny that comes with their own rises.

“By January,” he said, “it starts to stabilize.”

That’s already beginning to happen. Buttigieg is under scrutiny for refusing to discuss the three years he spent working for the consulting firm McKinsey & Co., pointing to a nondisclosure agreement he signed. A voter pressed Buttigieg on the issue Friday as he campaigned in New Hampshire.

“It’s not like I was running the place,” he said. “It was my first job out of school.” He added that the company “basically reflects what’s wrong with corporate America.”